Sometimes it is better to err on the side of caution than to expect miracles. Dust and sand from Mars are clogging the solar panels on NASA’s InSight spacecraft, preventing it from recharging its batteries and drastically shortening its life expectancy.

If you like space, NASA and space exploration is your passion, chances are you know about the InSight mission. If not, and this is the first time you’ve heard about it, don’t worry, here’s a summary of the mission and an explanatory video.

Now that you know what it is, let’s get to the important stuff. It seems that the days of NASA’s InSight Mars lander are numbered and the culprit of this space disaster is none other than dust.

And it is that NASA has announced that the ship is gradually losing energy due to the accumulation of dust on its solar panels. This has reduced its performance by 90% in the last few months. To be sure, InSight has had many open fronts.

After landing on the Red Planet on November 26, 2018, the InSight lander deployed two circular solar arrays each 2.2 meters in diameter.

At first, these generated 5,000 Wh of energy each Martian day, but in the last three and a half years dust has accumulated on the panels, reducing power to a mere 500Wh per day and dropping.

Winds have caused dust to break off the panels as well as collect on them, and NASA engineers have used InSight’s robotic arm to blow sand onto the panels so that the wind blows the grains away. turning them into little dust collectors.

Also Read  A hypersonic weapon over Ukraine: this is how the "Kinzhal" missiles that Russia already claims to have used work

However, power levels continue to decline and the upcoming stations at the Elysium Planitia lander site they will deposit enough dust for these levels to drop below the point of no return by the end of the year.

In response to this, Mission Control has ordered the lander’s robotic arm to be locked in its retreat posture one last time. and the power is being diverted to the ship’s seismometer, which will continue to record tremors for several more months.

By September, energy levels will have dropped so low that the seismometer will have to be turned off and InSight will only be able to send back an occasional image or signal. Sometime in December, the ship will stop working. 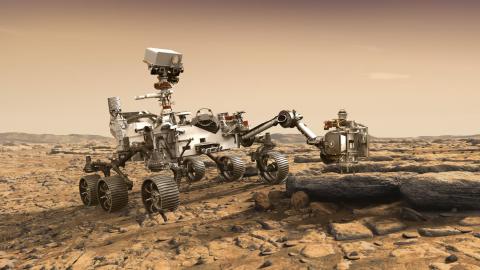 On the positive side, InSight has already completed its main mission and during its stay has sent back new data about Mars.including the detection on May 4, 2022 of a magnitude 5 earthquake, the most powerful detected so far outside the Earth.

NASA says that InSight could still survive if it ran into any strong air currents to sufficiently clear its panels.but low power levels make this an increasingly unlikely scenario.