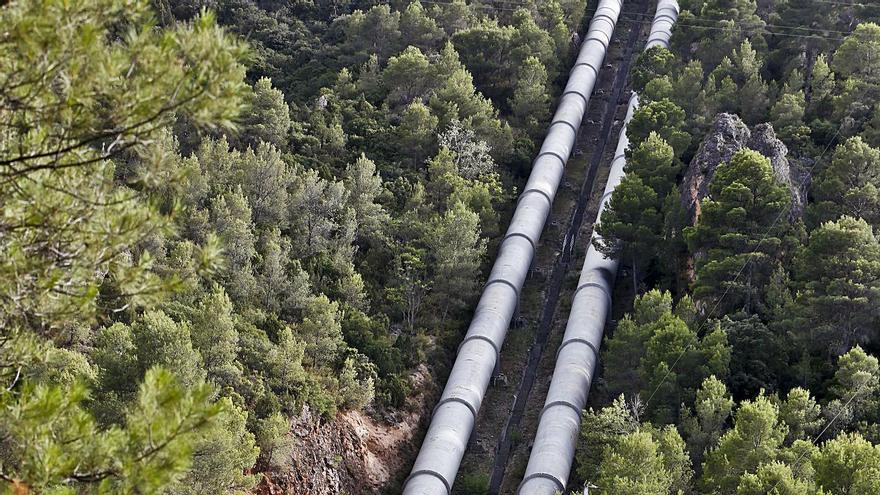 Just in the week in which the members of the National Water Council were sending to the headquarters of the Ministry for the Ecological Transition in Madrid their votes on the project of the Ministry to cut the monthly flow that sends to Alicante, Murcia and Almería from the Tagus, specifically of the Current 38 hm3 to 27 hm3 modifying the operating rules, the vice president and minister, Teresa Ribera has come across nature again. A generous winter in rains at the headwaters of the river has made it possible for the water reserve in the Entrepeñas and Buendía reservoirs – the outlet for the transfer water to reach 880 hm3. It is not the maximum amount of the year, but almost, because for ten days the canal has returned to send water to the vegetable garden of Europe, -20 hm3 in March-, but it does represent 20% more than a year ago (725 hm3 ), and 40% more than the average of dammed water of the last five years (543 hm3). That period of time, precisely, marked by the last great drought, in which the technicians made the report on which the Ministry is based to want to cut the transfer against the opinion, among others, of the farmers, the Provincial Council, Ineca and up to three governments of the four autonomous governments that have to say something about the transfer: the Generalitat Valenciana, Andalucía and Murcia. Castilla-La Mancha is a preferred partner of the Ministry in the distribution of water.

Last Thursday, April 1, the technicians took the pulse of the water reserve at the headwaters and, again, and for four consecutive months, we once again touch 38 hm3, the maximum flow that Madrid wants to cut. Nature is once again allying with the province and we have already been three months with the maximum transfer by a law, whose content was closed, between torrija and torrija, at Easter 2013 and that today, as regards the transfer of flows to the province, he is mortally wounded without a rigorous scientific basis.

Serious and incomprehensible is that the more than possible cut of water in the Tajo-Segura, with the increase in the ecological flow and the modification of the exploitation rules, threatens a turnover of one billion euros, which is the contribution of the agriculture of the transfer to the GDP of the province. Alicante’s GDP reaches, or reached until the economic disaster caused by the pandemic, 35,000 million euros, of which 4% (1,400 million) correspond to agriculture. If they subtracted one billion, the contribution would be reduced by 2.8% over that 4%.

Sixty thousand hectares irrigation distributed among the regions of the Vega Baja, Baix Vinalopó and Alicante, whose products, vegetables and citrus, have a great acceptance in Europe, and contributed, for example, to avoid shortages of fruits and vegetables during the toughest weeks of confinement in 2020. As Antonio Rico, director of the University Institute of Geography of the University of Alicante, recalls, the benefit of Tajo water is not only for the farmer, but for other industries such as agri-food. One cultivated hectare supports agricultural employment.

For the first time this year, the agricultural sector dependent on Tagus water will exceed 3,000 million euros in business volume in Alicante, Murcia and Almería, of which approximately 33% is generated in the province thanks to the increase in the demand throughout Europe for the covid. The Tagus water maintains 106,566 jobs, 5.8% of the workforce in Alicante and Murcia. Figures that confirm the importance of Tagus water for Alicante farmers, and for the maintenance of national agriculture, a strategic sector due to its high international competitiveness, and its ability to balance the economy in times of recession.

The contribution of the activity that depends directly on the transfer has for the first time exceeded the barrier of 3,000 million euros, standing at 3,013 million. In addition, the resulting economic dynamism contributes to the generation of employment not only in the cultivation of the land, but also in the sector of commercialization and transformation of agricultural products, as Lucas Jiménez, president of the Tajo-Segura Aqueduct Union, underlines.

The use of desalinated water cannot be considered an exclusive alternative to satisfy the total demand. If Vice President Teresa Ribera has not found out yet, she could go down to the province one day to have it explained to her.

It has been remembered ad nauseam but in Madrid, whoever governs, they do not want to find out. The water can be transferred, the sun cannot and, luckily, in the Mediterranean fringe we enjoy hours of sunshine and light from which the rest of Spain and much of Europe benefit. Common sense and less dogmatism.