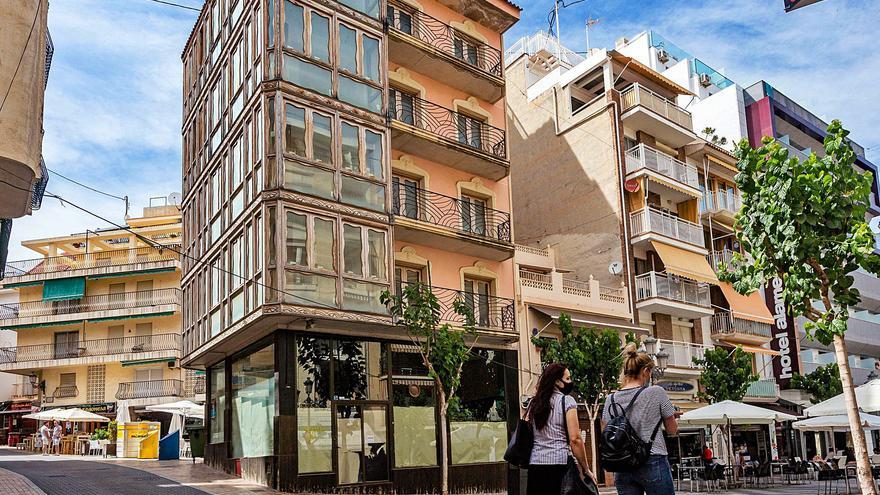 And it is that it has been empty since it was built and it has never had any use beyond a business in its lower premises that has not been around for a long time due to not being able to obtain the opening license. After the construction works, the property never managed to get the City Council to give it the occupancy license due to the excess of buildability and urban infringements. Among them, according to the sources consulted, the building should modify the enclosures of the balconies (one of the details that most attracts attention), fix the staircase and, most importantly: the dividing wall that does not comply with the appropriate measures. According to the sources consulted, this fact was the one denounced by one of the neighbors.

So it has never been used while the passage of time deteriorates it. The wood that covers part of the balconies is damaged, the rest of these elements also and those details that differentiate it lose color. This building, known as «French», leads the neighbors who have been waiting for months for a solution to the problems they encounter every day. According to the surrounding residents, they have detected how “several people have tried to enter the building with the possible intention of occupying it”; but also, “the windows on the upper floors are open” and that is generating “Noise and nuisance” to which is added that the pigeons have made the building their home “with the problems of unhealthiness that this generates” and that worries the neighbors who live a few meters away. Because not only does the building have a façade on Alameda Street, one of the busiest and most touristy, but it also occupies a part of the Plaza de la Constitución, where there is also a large influx of people and many hotelier venues in the city are located. .

Detail of the balconies that do not comply with the regulations. | DAVID REVENGA

The neighbors already sent a letter at the end of last year to the City Council to request a solution from the local administration since the current owners have not acted on the property despite having sentences that “oblige them to do so”, indicated the neighbors. In fact, in their writing they ask the council to “require the property to execute the sentences that order the demolition or repair of urban infractions” that the property has accumulated for more than 10 years. They also ask that, if the property does not execute them, “that” it is the City Council who proceeds to demolish them on a subsidiary basis “; that is to say, that it executes it and then passes the cost on to those owners. And they asked for more: if the property does not take over the building, that “the expropriation file be initiated to give public use” to it. But the situation remains the same and the surrounding residents are becoming desperate, so they will not cease in their efforts to find a solution.

For her part, the Councilor for Urbanism, Lourdes Caselles, He explained to this newspaper that “the only solution” to obtain that occupancy license is to end “that excess of buildability” by fixing the elements that do not comply with the regulations, such as the balconies. “The City Council has the doors open to try to solve the situation” of this property that “is in an emblematic site of the city and affects the urban scene and image of the area,” he added. But it is up to the owners to take the next step and comply with what a court specified.

However, Ciudadanos (Cs) this month conveyed to the local government the need to solve this situation. “Benidorm gives a very bad image, having abandoned a building for ten years in such a busy and touristy place, that is why we consider that the City Council should move a tab so that this is not perpetuated for another ten years,” explained the Cs spokesman, Juan Balastegui.

Emblematic area: Abandoned in the middle of the urban area

The «French Building», as it is known in the city and says a sign above the entrance door, is located on Alameda street in Benidorm on the corner with Constitución square, one of the most emblematic and busy areas of the city. For more than 10 years, its appearance has been deteriorating and the state of abandonment by not being able to inhabit it has made it become one of the city ​​”ghost” buildings. Its “modernist” style is practically unique in the city with details reminiscent of other well-known buildings of this style in other cities in Spain. Quite a loss if it is not fixed in the future.