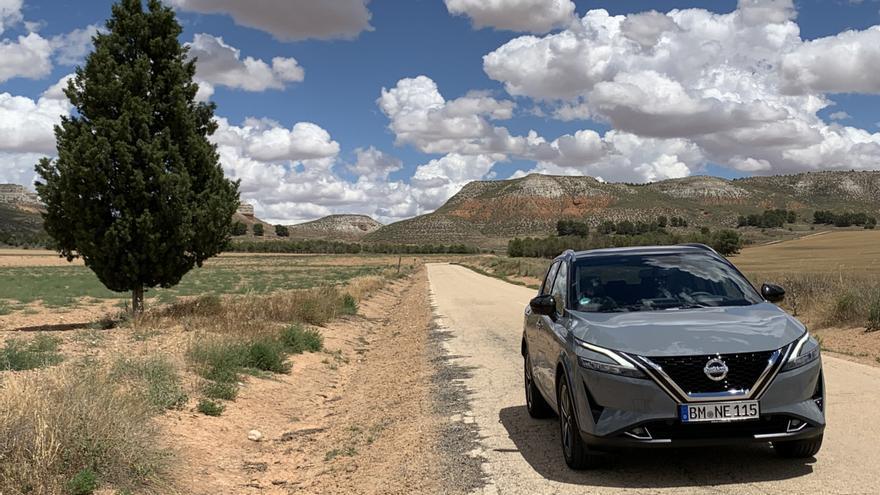 When a model like him Nissan Qashqai, creator of the new C-SUV segment, and more than a new segment, a new general trend in the automobile market with the popularization of crossovers, and which has also remained leader for 14 years in a row, the release of any update always has a clear competitor. And he is himself. You fight your own previous edition. NissanHe had a lot of hard work ahead of him, as the preceding Qashqai model was a great car, and with sales figures of a true leader. But after the contact we had in the presentation of this third generation, we can now advance that the engineers have successfully overcome the challenge they faced.

There is no doubt that the new Nissan Qashqai 2021 is much more attractive than its predecessor, thanks to more modern and robust exterior design, already a more technological and sophisticated interior. But the evolution of the Japanese crossover goes far beyond its renewed appearance, since without a doubt the most important changes are committed to what is not seen, but is felt. And in these improvements the Nissan Technical Center Europe (NTCE) of Barcelona, when it comes to getting the best possible performance from all the components that sit on the new CMF-C platform on which the new Qashqai is based.

And is that the new Qashqai has a pronounced Spanish accent, since in the NTCE, among other things, there have been two set aim very important to adapt the vehicle to the driving way more direct than we have in Europe. On the one hand, the calibration has been carried out to the European tastes of the CVT automatic transmission, with an electronic adjustment that makes it an excellent change, with perfect transitions, very quiet and without any type of acceleration from idle, choosing the optimal ratio for each situation, and with a very quick reaction to the steering wheel paddles. And we say it without being exactly fans of this type of change. And on the other, the adaptation to our tastes of the engines, both the Mild Hybrid As the e-Power, a true bet of the brand for this model.

The Communication Director of Nissan Iberia himself, Francesc Corberó, stressed that “the third generation of the Qashqai is the most Spanish of all, thanks to the innumerable contributions that have been made on the model from the Technical Center in Barcelona, ​​such as the arrival from electrification to 1.3-liter engines; the calibration of some driver assistance systems or the adaptation of the revolutionary e-Power system to the European driver ”.

But there are many more changes that makel new Qashqai new Qashqaia car a lot more dynamic than its predecessor. To begin with, the body stiffness increased by 48%As a result, the engineers have been able to more precisely adjust the stiffness of the springs and shock absorbers. This modification increases accuracy and response, while reduces vibrations. Despite the general increase in stiffness, the body is more than 60 kg lighter, which helps to optimize efficiency, while reducing inertia when driving, so drivers will notice the improved agility.

exist two settings for the rear suspension. If the new Qashqai has front-wheel drive with 19-inch or smaller tires, a torsion bar improved, with a new superior insulator in the body that increases the local stiffness of the same and reduces the transmission of vibrations to the passenger compartment. In turn, and to maximize the effectiveness of the shock absorbers, their orientation has been modified towards a more vertical position that reduces friction and, therefore, optimizes their performance, ensuring better absorption of potholes and a smoother ride. to provide better roll control.

If instead, you have opted for 20-inch wheels or the all-wheel drive version, you will enjoy the poise and comfort provided by the multi-link rear suspension. It provides a high connection to the road, with improved cornering response thanks to minimized and controlled roll, without compromising comfort. In both suspension configurations, isolation from road noise and vibrations remains one of the Qashqai’s best attributes, with a refinement comparable to higher segment vehicles.

Another improvement that we felt during the first contact with the new Qashqai was the direction compared to its predecessor. It is softer and more pleasant in its handling but at the most precise and direct time, which allows a better guidance of the vehicle in any circumstance.

From the moment of its launch, the Qashqai 2021 is available on 1.3-liter gasoline engine with mild hybrid technology, available in two power levels: 140 or 158 hp. The ALiS 12V lightweight hybrid system is a hybrid technology that offers torque assistance, extended idle stop, quick start and engine brake (Xtronic versions only), with improvements in both fuel consumption and emissions CO2 (-4 g / km). The ALiS lightweight hybrid system adds just 22 kg to the total mass of the vehicle.

Serial this propeller is associated with even six-speed manual transmission, but optionally can ride the Xtronic automatic gearbox with the aforementioned improvements, and that allow it to offer a perfect duality between the smoothness and discretion that is required in daily driving, and the speed and precision that are required in more sporty driving. For the latter, there are also paddles behind the wheel.

In the presentation we tested the new Nissan Qashqai with manual transmission and the 158 hp version with XTronic transmission, the latter being the one that we liked the most by far both for its reactions to our demands on the accelerator and for its consumption, of so only 6.7 l / 100, in a mixed route. To highlight its much more direct direction with a very noble behavior, maintaining the line that is marked at all times, which is greatly helped by its new platform, much more rigid and lighter and, again, the calibration of the suspensions carried out. for the European market in the technological center of Barcelona. And all this with a great ride comfort. This is helped by the perfect design of the seats, which considerably minimize driver fatigue.

But if there is a change that marks the arrival of new Qashqai, this is undoubtedly the e-Power engine. It is not yet available in our country, but it will be a revolution, since unite the advantages of electric conduction, to a autonomy of a combustion engine. This propeller works as an electric generator, allowing to optimize its operation to the maximum since it operates at a fixed speed. ANDThe label that will be given to you is still pending with the authorities, since it will be much more optimal both in consumption and emissions than a normal combustion vehicle. What we did learn during the presentation is the intention of the brand of to position the e-Power in price at the level of a latest generation Euro 6 diesel, very important if you have a strong intention for this hybrid engine to be successful. If you want to know more about the new engine, do not miss this report in which we already advanced in the month of March that Nissan to debut e-Power technology in Europe with Qashqai.

Range, prices and engines of the new Nissan Qashqai 2021

The new Nissan Qashqai is marketed in Spain with finishes Visia, Agency, N-Connect, Tekna Y Tekna +, in addition to the release version Premiere Edition, which allows you to enjoy a higher level of equipment and distinctive elements for a more accessible price.

From the Acenta version you already enjoy full compatibility with Android Auto and Apple CarPlay, plus 17-inch wheels. In the N-Connecta version These are already 18 inches and wireless charging for the mobile is added, all the company’s connected services, TomTom real-time navigation, assistant Amazon Alexa y Google Assit, and one 12.3-inch configurable fully digital instrumentation, among other elements. The equipment Tekna add a 10.8-inch color head-up display, Full LED matrix and adaptive headlights, automatic tailgate, leather upholstery and the famous Nissan ProPilot security system, in addition to 19-inch wheels. And the top of the range Tekna + It includes 20 inch wheels, electric and heated seats, multi-link sports suspension and a Bose sound system with 10 speakers.

In the absence of seeing the prices of e-Power and how it will penetrate our market, the new Qashqai is already reaping the success expected of it, more than 1,100 reservations, which places Spain as the European country with the highest number of pre-sales.

Here you have all prices and finishes for Spain of the new Qashqai 2021.