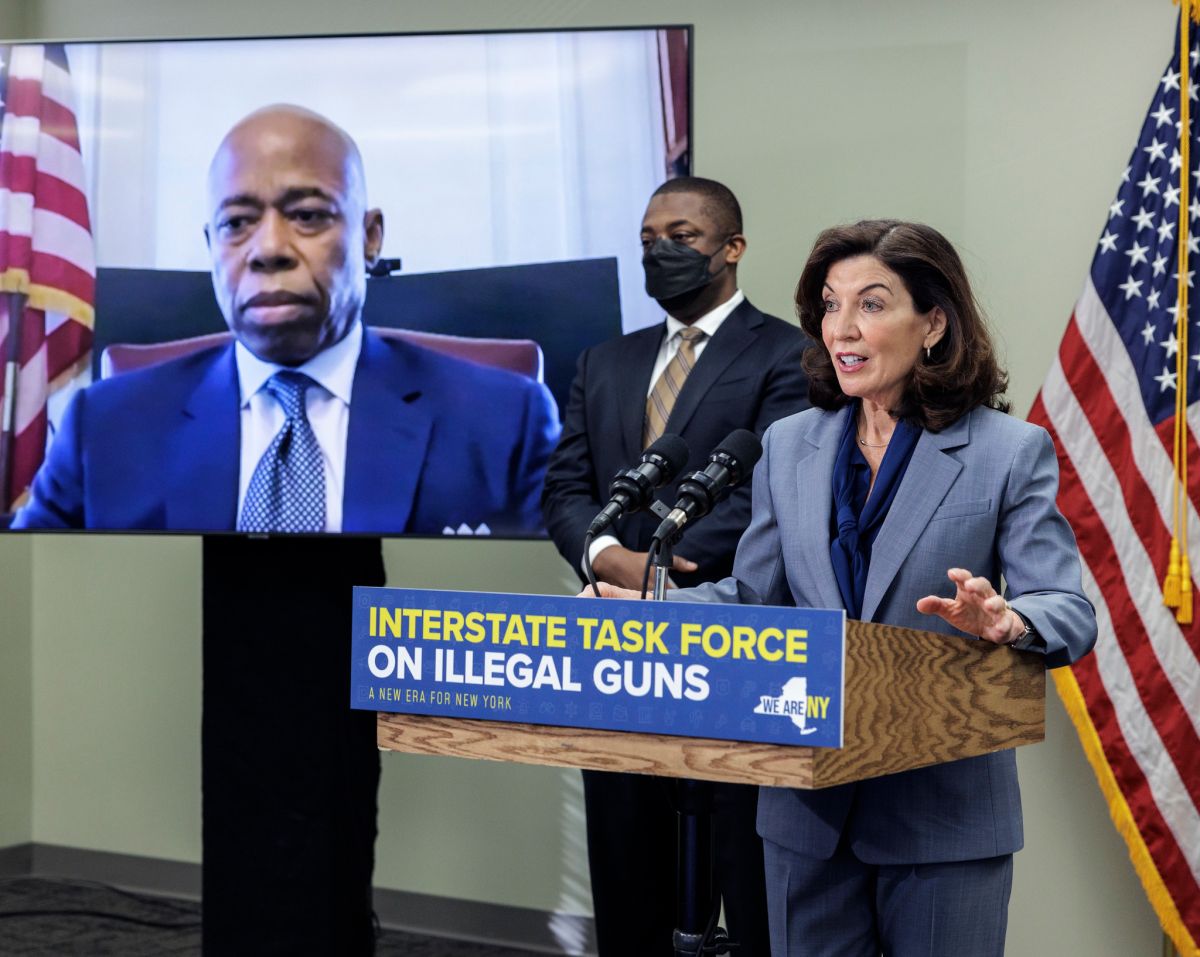 In the midst of the mourning that the Big Apple is experiencing for the two Hispanic policemen who were shot in Harlem, where a Glock pistol was used that everything indicates was acquired in Baltimore, the New York authorities are creating several fronts to limit the ways by which illegal weapons enter the state, and for this reason this Wednesday the newly created met for the first time Interstate Task Force Against Violence, which first included nine states in the northeast of the country.

This initiative, in which the New York City Police Department (NYPD) and agencies from Rhode Island, Connecticut, Vermont, Ohio, Massachusetts, Pennsylvania, New Jersey and New Hampshire will play a leading role, is proposed as an emergency “build a wall” to the entry of illegal weapons to the streets of New York City.

“Two young men in their 20s, who had a life ahead of them, were mangled with a weapon that everything indicates came from Baltimore,” Governor Kathy Hochul said at the opening of this first meeting.

According to police investigations, the 9mm pistol that blinded the lives of NYPD officers Jason Rivera and Wilbert Mora, in possession of Lashawn McNeil, accused of that crime, was robbed in Baltimore in 2017.

Other versions confirmed by local media maintain that at the same crime scene, in addition to a rifle was found AR-15 assault rifle loaded under the mattress of the alleged murderer of the two uniformed men, both of Hispanic origin.

The discovery was made Saturday after detectives obtained a search warrant for the Harlem apartment where McNeil allegedly shot officers who responded to a 911 call from his mother for violent behavior.

This latest tragedy that once again mourns New York, shaken by armed violence in the last two years and the most alarming in a decade, once again brings to the forefront that most of the weapons recovered in police investigations come from other states.

Is an emergency lock the iron pipe!

Given the wave of shootings, both Mayor Eric Adams and the state president have declared as an emergency to “stop the flow” of the well-known flow of weapons to “save lives”. In parallel, they announce other community prevention investments.

Specifically, this task force meeting this Wednesday will end in the formation of an interstate unit for the exchange of information, intelligence and tracking, in partnership with prosecutors and law enforcement agencies in each state.

“We have become an ocean of violence, a sea of ​​violence. And as I have indicated, there are many rivers that are feeding this sea. If we don’t dam each of these rivers, we will lose families and innocent children”, highlighted the Mayor in his speech before the first meeting of the interstate front against weapons.

Meanwhile, the Lieutenant Governor Brian Benjamin from the New York State Intelligence Center (NYSIC), located in East Greenbush, stressed that this strategy will require maximum teamwork between neighboring states and the federal government.

“There are several measures we are taking to get weapons off the streets. We’re starting with this concrete action to stop the flow of weapons into New York, that travels through ‘the iron pipe’. It is a step to end desolation and fear,” Benjamin said.

Homicides with firearms increased by 80% since 2019, and three-quarters of the weapons used came from other states.

Despite having some of the strictest gun laws in the country, New York City is the end point of a funnel of guns and even rifles, illegally trafficked from southern states along the entire Interstate 95 highway.

This road known as the “iron pipe” according to experts is one of the engines of violence in the Big Apple.

More than half of the various caliber handguns seized in the city in recent years have been traced from Florida, Georgia, North and South Carolina, Virginia and Pennsylvania, according to a series of police analyses.

The other front: Social networks

Governor Hochul stressed that inviting several states to filter dangerous detonating devices for families, it is just one of the axes of their plan.

“Where do these weapons come from that, for example, are doing so much damage to communities in the Bronx and Upper Manhattan? We will block that. And New York is stepping up to the plate in the face of a national crisis. But this also includes other actions.

The state president specified that in addition to turning on a whole machinery of collaboration with leaders from other states, the state police intelligence centers are fine-tuning other forms of put against the ropes and detect the thugs.

And, in this sense, he promised to aim with intelligence, technology and precision towards dangerous messages disclosed through social networks.

Precisely, after the detailed investigations of the accused of having shot the two NYPD officers, last Friday in Harlem, local media disclosed that he had shared music videos of Brooklyn rappers on social networks, where in the story they showed elements pointing and subduing a policeman with a revolver.

Hochul proposed in the fiscal year 2023 budget, nearly $9 million in funding for the New York State Police to hire new officers, analysts of tracking of crimes with weapons but also of social networks and computer crime experts.

Flow of guns and shots in NY:

A night of bullets in the Bronx: