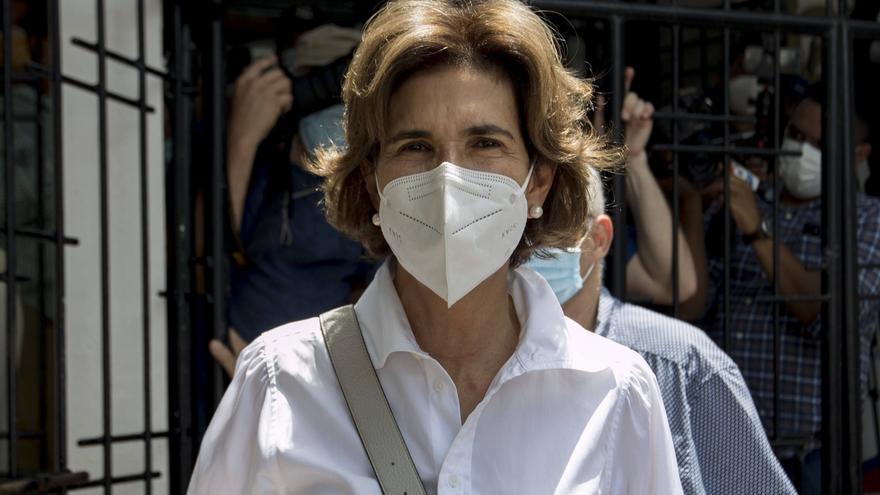 Christian Chamorro Barrios, the Nicaraguan opposition figure most likely to Win the election November, in which President Daniel Ortega seeks a new re-election, was disqualified from participating in that contest under the argument of “not being in full enjoyment of their civil and political rights.” Chamorro Barrios, daughter of former president Violeta Barrios de Chamorro (1990-1997) who defeated Ortega in the 1990 elections, and against whom an arrest warrant was issued for a case of alleged money laundering, was disqualified at the request of the Public Ministry. “The Christian citizen María Chamorro Barrios is disqualified from holding institutional and public positions for not being in full enjoyment of her civil and political rights, for being in an investigative criminal process,” according to the court ruling. The Fifth District Criminal Court of Managua Circumscription Hearings ruled “the precautionary measures requested by the Public Ministry” against Chamorro Barrios, accused of the crimes of abusive management, ideological falsehood, both in real competition with money laundering. money, property and assets.

The Prosecutor’s Office, led by former Sandinista guerrilla Ana Julia Guido, asked Chamorro Barrios, a 67-year-old journalist, to be disqualified from public office, who on the eve asked the opposition Citizens for Freedom Alliance (CxL) to be included as a presidential candidate for the general elections of November 7. Justice also dictated immigration retention and it prohibited him from attending certain meetings or places related to the events under investigation, so “he must refrain from attending any type of meetings or activities due to the seriousness of the crimes under investigation.”

Judge Karen Chavarría Morales, head of the Ninth Criminal Hearing District of Managua, issued this Wednesday a search warrant and arrest against Chamorro Barrios, who led the NGO Fundación Violeta Barrios de Chamorro until last February, when it closed. The judge also ordered to file the proceedings, to give the legal process to the judicial process, and “once it has been apprehended and placed at the order of the judicial authority, the accused will be given the respective hearing.”

The Nicaraguan Police searched the home of the presidential candidate, and according to her brother, the journalist Carlos Fernando Chamorro, awarded the Ortega y Gasset 2021 prize, “after more than five hours of raiding,” the policemen ” they leave low house arrest, under isolation“and guarded.

OAS: Nicaragua is heading for “the worst possible elections”

The Organization of American States (OAS) warned that Nicaragua is heading for “the worst possible elections”, calling it a “new attack on democracy “the disqualification of Chamorro Barrios, which makes” even more impossible the existence of free, fair and transparent elections. “” Actions like these they subtract all political credibility to the government and to the organizers of the electoral process, “the OAS pointed out, which described as” violating the Inter-American Democratic Charter, the OAS charter “and the human rights instruments and international covenants,” the use of the Public Ministry, the precautionary measures and precautionary, the politicized handling of justice and the de facto banning of candidates. “” The arbitrary ban on the opposition leader @chamorrocris (Cristiana Chamorro) reflects the Ortega’s fear of free and fair elections“, said, for his part, the US Secretary of State, Antony Blinken, in a tweet.

Meanwhile, Costa Rica condemned the actions against the Nicaraguan opposition and called for the end of any act that violates free and fair elections.

They ask to apply the Democratic Charter

The Nicaraguan opposition group National Coalition asked the OAS to continue the process of application of the Inter-American Democratic Charter to the Central American country, initiated in January 2019 by “breaking the constitutional order” by Ortega. Aspiring opponents to the Nicaraguan presidency agreed that Ortega fears free elections. “The arrest warrant against @chamorrocris is an intimidating, bullying message against all Nicaraguans who want to get out of this lumpen dictatorship, through electoral channels,” said Arturo Cruz, who was the Ortega government’s ambassador to the United States between 2007 and 2009. “I express my most absolute rejection of the unjust political persecution against @chamorrocris, which arises from the fear that the dictatorship has of a free electoral process,” said academic Félix Maradiaga.

According to the Ministry of the Interior, the Violeta Barrios de Chamorro Foundation, dedicated to the protection and promotion of freedom of the press and expression, “seriously breached its obligations before the Regulatory Entity, and the analysis of the Financial Statements, period 2015-2019 , clear evidence of money laundering was obtained, “for which” the Public Ministry has been informed to (open) the corresponding investigation. ” In this case, the Prosecutor’s Office has called about twenty journalists to testify as witnesses, and the writer, novelist and former vice president of Nicaragua Sergio Ramírez Mercado.