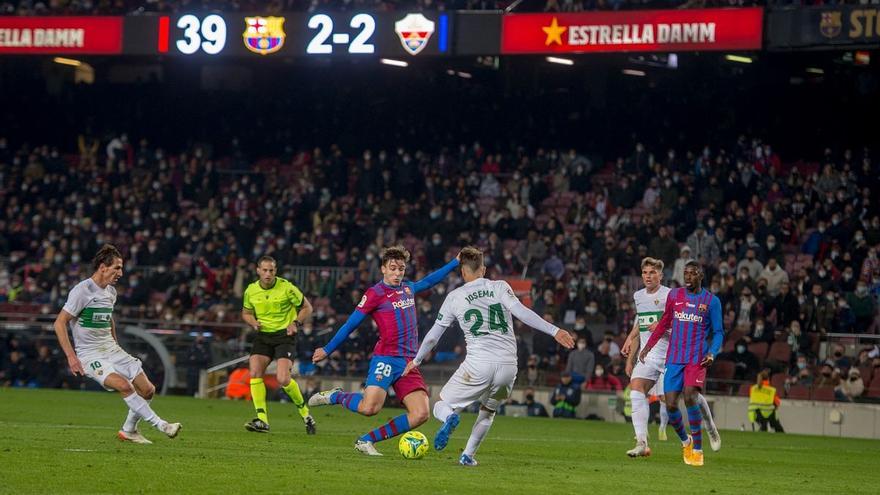 Half Point. Left-handed interior. False nine. Extreme. Defensive midfielder. Left-handed side forced. Everywhere. And in none. Was there a Gavi at the Camp Nou? Or were there 10? It is not yet known, but the size of the majestic match signed by an Andalusian boy, barely 17 years old, elevates it to the status of a figure, acclaimed as it was by the Catalans who attended the temple. They are less and less. 41,644 fans who, for the first time, in the new era announced by Xavi let out reproaches to the team. Yes, whistles were heard. Whistles after that tragic minute in which the Elche scored two goals in disastrous defensive actions of the Barça. Also linked to the fact that Ter Stegen’s hands have been shaking for weeks. And now down to the feet.

But then it came Gavi, that cheeky kid, irreverent, who plays as unleashed as his boots – why tie knots? -, transformed the Camp Nou into a visual spectacle that will take time to forget. Visual and soccer because he assumed full responsibility for a volcanic afternoon that threatened another landslide.

But, oblivious to the fear that nested in the stadium, asked for the ball to become the mainstay of a depressed team. He signed a goal with an iniestano air -that break with the body to Enzo Roco-, although before he had left a control and heel, all in the same action, that turned the Camp Nou upside down. The goal, being wonderful, was not Gavi’s best. Not much less.

What was influential was his ability to break down barriers, especially emotional ones, to break the Elche that was believed, and with good reason, with options to assault Barça. Then, at 2-2, anguished as Barça were doing, Gavi grabbed the ball and headed towards the end line from the Elche goal. The field was running out. And the weather. But he had all the pause in the world to look back without opening his eyes to detect his buddy. Everyone was waiting for the center at the near post. Everyone except Gavi.

Xavi gives instructions to Gavi during Barça-Elche at the Camp Nou. JORDI COTRINA

“What have I thought? Whatever it was! And that control has gone a little“Nico admitted.” I had not scored a single goal last year in Second B and now I have two, “Fran’s son said, even surprised. The one who was still amazed was Xavi.” Gavi’s game is spectacular. His 17-year-old personality is surprising. When I was 17, everything cost me more, “said the Barça coach, saved in the final minutes by that connection between Nico and Gavi. Gavi or Nico.

The order of the factors does not alter the product. And while Nico shouted his joy in ecstasy, Gavi kicked the billboard happy because his match, huge, superb, even supernatural considering the complex and gloomy panorama that loomed over the Camp Nou, found the poetic justice it deserved .

Also Read  Covid 19: France approves the law that limits the access of the unvaccinated to leisure and restaurant venues | Society

“It’s a show,” Xavi said over and over again. “He has made a great hat match. Overflowing with personality. It is a show for how he competes with 17 years. His personality overflows, the goal, the assistance, it is the future of the club … I played here at 18 and I was very scared. Gavi is excited by how he competes, “recalled the Barça coach.

“We have to go back to the model. It is difficult for me to understand why the positional game is not played. I have not been here these last six years”

“He is not even of legal age and surprises by marking the differences,” said Xavi, hurt because Barça still does not understand the positional game that he demands. Perhaps Frenkie de Jong’s change was going in that direction. “It’s hard to understand why you don’t do that, I haven’t been here in these six years,” explained the coach.

“It is necessary to return to the model. It has been lost”, has sentenced Xavi. While you get lost there is always Gavi to remember the way.