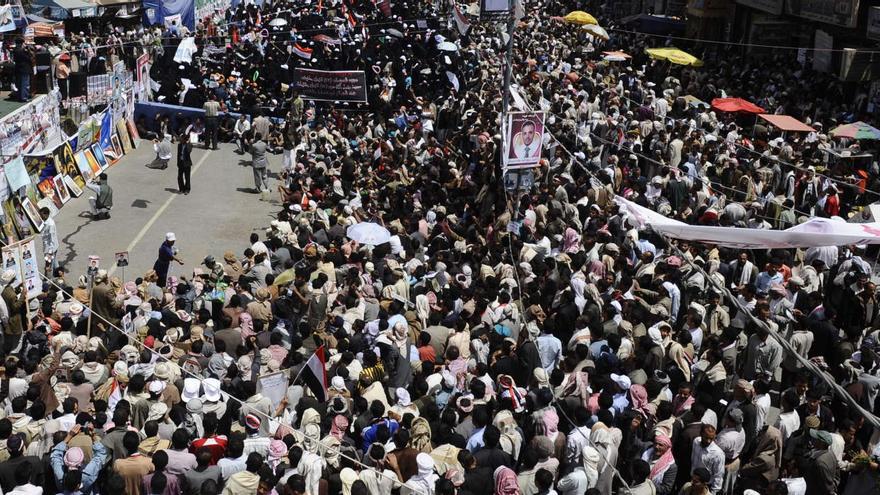 The tenth anniversary of the Moroccan protest movement, which ignited almost at the same time as in Tunisia, Egypt or Libya, passes today in Morocco without the slightest sign of celebration, before a generalized feeling that the problems of that time, which brought the people to the streets, are still present.

That February 20, 2011Tens of thousands of people, mostly young people from all walks of life, took to the streets of various cities in the country to demand “freedom, dignity and social justice”, a slogan that was repeated throughout the Arab world.

As in other countries, the spark had ignited spontaneously, from social networks, and the conveners were unknown young people who launched an appeal online and created a “Movement February 20”.

Of those young people who became protagonists at the age of 25, the fate has been different in the past decade: some are in jail, others emigrated or went into exile, others disengaged from politics, and there were even those who ended up on a high institutional position (Munir Bensaleh, Secretary General of the National Council for Human Rights, who refused to speak with Efe, claiming “duty of reserve”).

The only one of them who has agreed to talk about those days is Hamza Mahfoudi: 34 years old, Today he lives in Marseille and works in an association to help emigrants, and does not plan to return to his country for the moment “because many friends of mine have been arrested,” he explains to Efe by phone.

Was that move worth it? Mahfoudi does not doubt it: “It was like our May ’68, It changed a whole generation and allowed us to take ownership of our country, have more confidence. ”

But he doubts whether the movement brought a freer or more just country.

“The regime has turned back when it comes to freedoms, but with the people it is different: they have lost their fear, they dare to protest, whether for work, water or other rights; As for social justice, he believes that “the country has been stagnant, there is no access to healthcare or equal opportunities.”

For Nabil Benabdallah, secretary general of the Party of Progress and Socialism, which represents the most progressive wing of the Moroccan regime (he has been minister several times), the 20F is part of a historical process of democratic demands that make Morocco a different case from the from other Arab countries and that They explain that the protests in Morocco “did not demand a regime change.”

Indeed, while in the Arab world the most popular slogan in 2011 era “the people want the system to fall”In Morocco they transformed it into “the people want corruption to fall”, and the fall of Mohamed VI or the end of the monarchy was never claimed (at most, they claimed “a parliamentary monarchy”).

Benabdallah considers that Mohamed VI had promoted reforms in the first decade of his reign “that allowed to channel popular discontent“such as the release of political prisoners, the recognition of the Berber language, the enactment of more egalitarian laws with women or the fight against shanty towns.

In addition, remember that those protests made the monarch react, who only three weeks later announced a referendum on constitutional reform that allowed the protests to deflate: on July 1, 2011, the new constitution – “advanced and new in the world,” says Benabdallah – it was approved by an overwhelming majority.

The politician believes that, ten years later, “we have made a lot of progress but there is still much to do, especially in the construction of democracy, human rights, economic development and social justice.” The important thing -he affirms- is that Morocco “he has not opted for total repression” like other countries in the area.

In addition to the new constitution, one of the direct consequences of the 20F movement was the call for elections in 2011, considered among the most credible in the history of Morocco, which were won by the Justice and Development Party (PJD), a moderate Islamist party that likes to compare itself with the Christian Democrats, saving distances.

One of the ideologues of the PJD, Abdelali Hamiedín, comments to Efe that the reforms demanded by that movement were in some way assumed by the two governments led by the PJD in the person of Abdelilah Benkirán (between 2012 and 2017), which allowed his party to continue winning the elections in 2015 (local and regional) and 2016 (legislative).

The attitude of the PJD perfectly illustrates the 20F scopes and limitations: Like the other parliamentary parties, the PJD did not join the protests at the time, but tried to capitalize on their demands through “official” policy and thus largely deactivated the destabilizing capacity of the movement.

For Hamiedin, King Mohamed VI then opted for “a positive interaction with the message of an enraged street” and then committed himself to “an in-depth reform of the State structures”, but “success is relative and imbalances are still present.”

The responsibilityAccording to him, it is shared, and he does not shy away from self-criticism: “the parties and political elites have squandered the opportunity for Morocco to join the club of advanced democracies. A long work awaits us to consolidate new relations between the powers and establish the foundations of true democracy “, he concludes.