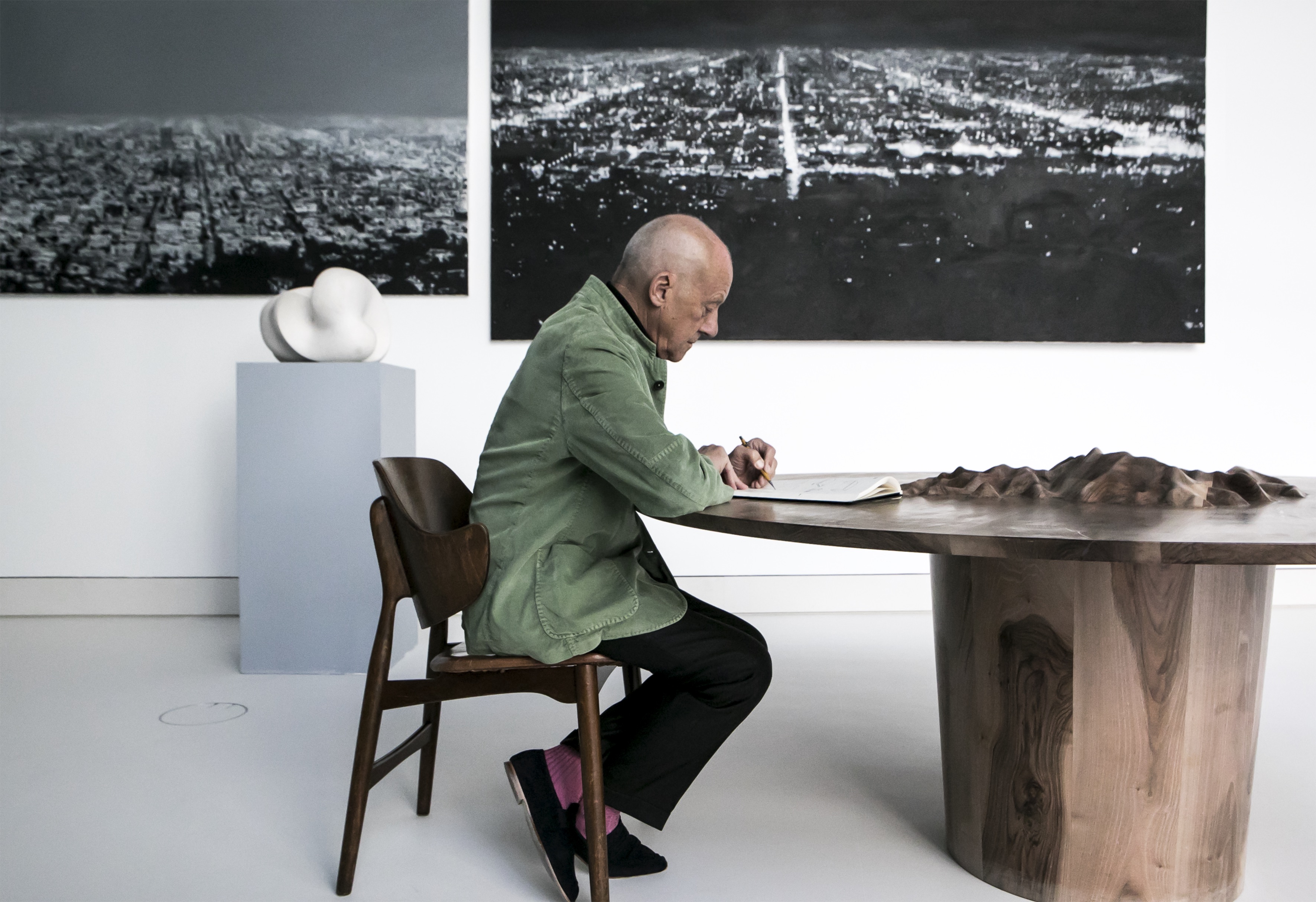 Someone once said that if you ask Norman Foster (Manchester, 1935) a question, he will answer you with a drawing. For Foster, the pencil is much more than the architect’s basic work tool: it is the means that allows him to give way to an overflowing creativity that knows no limits. Architecture, of course, but also furniture, clothes, books and even one-person flying machines. Everything that surrounds him is susceptible to design and reflection in his inseparable sketchbooks. “I still experience the same tactile pleasure of drawing a line on paper and thus opening an Aladdin’s cave full of ideas,” said the architect.

Foster’s passion for drawing began when he was just a child. His primary school notebooks show a Norman keep, medieval mansion or 16th century half-timbered construction drawn with analytical precision and technical maturity that contrast with the naive childlike handwriting that accompanies them. Along with one of those pictures, a teacher wrote: “An excellent notebook, Norman. Keep it up”.

And boy did he continue. Today they are kept in the archives of the Norman Foster Foundation, based in Madrid, more than 1,200 sketchbooks, the graphic legacy of a life devoted to architecture and design. A part of those sketches (and also a part of that life) can now be enjoyed in Norman Foster Sketchbooks 1975–2020, a fascinating book that takes us into the creative universe of one of the most stimulating minds on the world architectural scene. Designed by Ivorypress, the prestigious publishing house directed by Elena Ochoa Foster, this title serves as a forefront of a multi-volume compilation that will present Norman Foster’s work decade by decade.

Jorge Sainz (Madrid, 1955) has been commissioned to compile this first selection of more than half a thousand drawings. Translator, doctor architect, editor and tenured professor of the School of Architecture of the Polytechnic University of Madrid, has reviewed each and every one of the notebooks and then do something that for Foster “would have been impossible”: choose and discard drawings. “After reviewing the more than a thousand archived notebooks, I found that there was a lot of unpublished material, because they were almost always drawings of the initial phases of the projects; in fact, Foster himself told me that he didn’t remember many of them, ”says Sainz.

The sketch has always been associated with the myth of the architect as a creative genius. Jørn Utzon is said to have won the Sydney Opera House competition thanks to a quick sketch that, almost by chance, was saved from the crowd of disqualified. At 85 years old, Foster does not believe too much in these legends, as this quote makes clear: “I feel a healthy skepticism about that supposed eureka moment in which an instant scribble on a napkin produces a definitive design. The sketch that looks like a dazzling flash of imagination is most likely the result of total immersion in problems for a time. When you finally get all the pieces of the puzzle in a project to fit into place, there is a certain sense of inevitability. “

In the case of one of his latest and most high-profile projects, Apple Park in Cupertino, Foster’s notebooks show reflections on the Californian landscape and conceptual diagrams in which he compares the size of the ring-shaped building with an iPhone magnified 3,300 times. . They also reveal conversations with Steve Jobs before his passing in 2011. Imagining these two design titans locked in a room, talking and thoroughly drawing, gives you goosebumps.

Possibly the most interesting thing about this architect’s notebooks is that they don’t just talk about architecture. Foster’s tireless curiosity to understand how the world around him works is answered on paper and pencil (sometimes rarely, in ink or colored marker). His drawings are a contemporary nod to the codices of Leonardo Da Vinci, both left-handed. Foster also shares with the Renaissance polymath his machinist fervor and passion for making human beings fly. Remember that the first drawing he made when he was a child was “a huge flying machine that soared through the skies.” Today he is an experienced pilot who imagines prototypes of gliders, helicopters, light aircraft, jets and, more recently, drones. His drawings include the interior design of the cabin of an aircraft developed in great detail, which even presents different samples of the color finish of the leather for the upholstery of the seats.

Jorge Sainz clarifies to us: “Foster designs objects because he is very interested in the quality of the everyday environment, both domestic and work. When on vacation, he draws the deck chair on the beach; and when he thinks about his work, he draws the chair and table that he would like to have in his office ”. They are agile drawings, those of someone who thinks at the same speed as the pencil slides, full of arrows and annotations, which present us with a person obsessed with order and design. His notebooks are “the equivalent of a portable study”, an entire office. In addition to drawings, we found scripts for speeches and conferences, reminders for his complicated work schedule and even the draft for the announcement of a job offer (“excellent salary and future perspective”).

“Norman Foster uses his notebooks as a true record of all his creative activity, but also of his personal experiences,” says Jorge Sainz. In fact, when Foster is not working, he continues to draw. When he is traveling, his notebooks contain maps of his excursions, itineraries along the ski slopes, tables full of food and drinks in which he describes in great detail each product at his fingertips and drawings of buildings that he visits and find interesting (the Frank Lloyd Wright’s Waterfall House, from Castelar de Rafael Building de la Hoz in Madrid, and even draws a perfectly bounded sculpture by Chillida Leku).

A note for Jean Nouvel, written in October 1995 from a Paris taxi on the way to the airport, is striking, in which he congratulates the French architect on the then recently completed Cartier Foundation building. “FABULOUS, GORGEOUS, CONGRATULATIONS!” He writes in capital letters. “The taxi driver also loves your building,” he says as a farewell. “For Foster,” Sainz points out, “notebooks are also a means of communication with other people, not only his collaborators in the professional studio, but also friends and family. In fact, there are some notes, with a different handwriting, that show that the notebooks were the best place to leave a message: I would always see it ”. Foster’s passion for notebooks was well known to those close to him. An example of this is notebook 26-01, dated March 1978, a Christmas gift from his friends Tony and Pat, who wrote to him as a dedication: “A blank notebook for a new project.”

Norman Foster Sketchbooks 1975–2020 reflects 45 years of a life that passes through drawing. These sketches, in addition to satisfying our spirit more voyeur, teach us that absolutely everything in our environment is object of design and that it can and should be improved. “Everybody has their idea of ​​hell,” writes Foster in the foreword, “for me it would be not being able to pick up a pencil.”