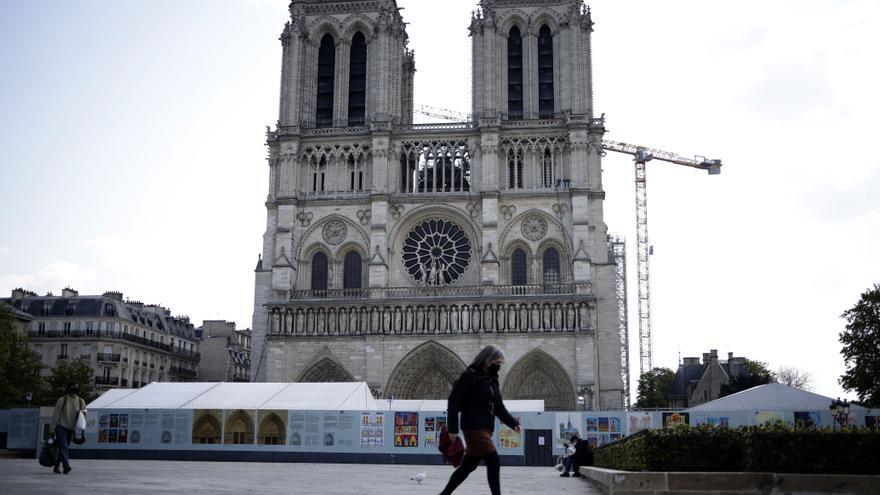 The traumatic memory of the fire of April 15, 2019, which destroyed the roof of Notre Dame Cathedral, has given way two years later to the security of seeing the temple again in its splendor in 2024 before the favorable advance of the works whose initial phase finally ends this summer.

Two years after the catastrophe, the president, Emmanuel Macron, visits the works this Thursday accompanied by the Minister of Culture, Roselyne Bachelot, and the mayor of Paris, Anne Hidalgo, in what will be his first return to the cathedral after the accident.

If the fire continues to be a nightmare in the memories of the French, the Government has turned the works into a showcase for the artisans and technicians who are working on its reconstruction, and that will be the main reason for the leader’s visit.

“It is the occasion to thank all those who have made it possible to save the chairl, to those who are working on its reconstruction and to the 340,000 donors from around the world who have made these works possible, “the Elysee explained today.

It was Macron who assured the night of the fire that Notre Dame would reopen in 2024 and for now the date remains, although with conditions.

A first phase full of complications

The body that coordinates the works expects to return the cathedral to worship and tourist visits on April 15, 2024, although the work will not be completely finished.

“Now my concern is to get rigorous planning to set our path for reopening to worship in 2024,” said General Jean-Louis Georgelin, coordinator of the works, in a video about the restoration broadcast on social networks.

This despite the three challenges that have complicated the interventions: lead contamination, the health crisis and the order issued by the prefecture that, due to the danger, regulates the number of people that can be in the cathedral.

Reconstruction is finally beginning to glimpse as the first phase of consolidation ends, which will have lasted more than two years and which was intended to remove the scaffolding burned from the spire and which threatened to collapse the building, the evacuation of the great organ, the restoration tests in the chapels and the cleaning of the vaults.

Before moving forward, the technicians are now involved in the installation of the scaffolding inside to stabilize the vaults with wooden falsework and in the placement of a protector to prevent water from entering the cathedral.

The second semester of 2021 will mark the beginning of the restoration itself, although some work has already begun: the protocol to test the cleaning process that will be used in the 24 chapels of the cathedral in the chapel of San Fernando and Nuestra Señora de Guadalupe. , which has been successfully tested.

The selection has also been made and felling of the 1,000 oaks whose wood will be used to rebuild the transept frame and spire, destroyed in the fire.

The very advanced reconstruction studies have made it possible to settle the controversy about whether to carry out an intervention faithful to the original version or to add a contemporary bet.

Macron gave the go-ahead to the reconstruction plan in July 2020, although according to the entity responsible for the works it will be close to that of the missing roof but not identical.

“It will not be a simple facsimile of the missing work. Faithful to medieval design, it will restore the pertinent repairs in the structural or patrimonial plane,” the agency indicates in a note.

The Socra company, responsible for the restoration of the copper statues of the spire, which had been removed from the ceiling days before the fire and were saved, He has also retouched the rooster that crowned the peak of the construction and that it fell to the ground during the fire, although without significant damage.

However, as explained by the CEO of Socra, Richard Boyer, the rooster, the animal symbol of France, it has only been retouched and not restored.

One possibility raised by some workers close to the works is that in this case the Government does decide to make a tender to put a sculpture on the spire with a contemporary touch. The ancient rooster will be exhibited in the cathedral as a testimony to the catastrophe.

It will not be the only testimony of the catastrophe, about which the film director Jean-Jacques Annaud (“Le nom de la rose” -The name of the rose-, “Seven Years in Tibet” -Seven years in Tibet-) is currently preparing a movie.

The cathedral has received donations from around the world worth 833 million euros (almost 1,000 million dollars), an amount that can be spectacular but that may not be enough for the total of the works and the expenses that remain to be covered, so the demand for donations continues.