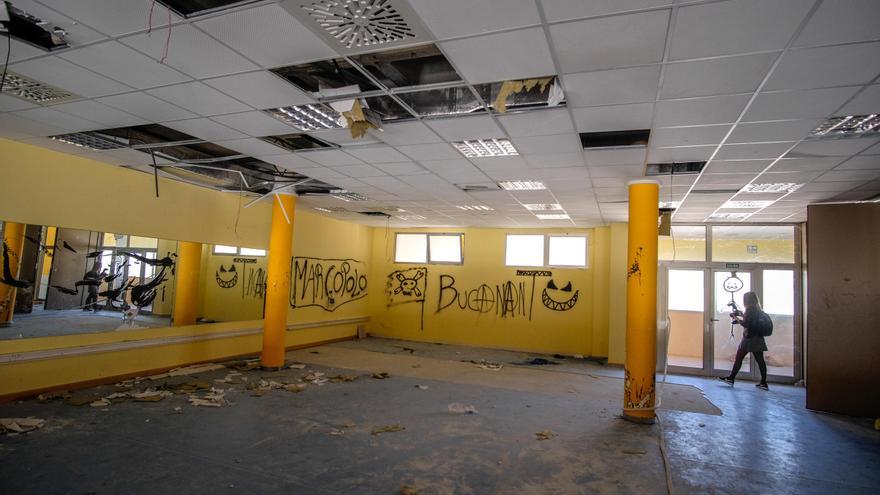 Effect of vandalism at the Health and Water Center in Novelda. ÁXEL ÁLVAREZ

From the Department of Finance Iván Ñíguez has thanked the work of all those who have contributed to one of those “Crazy things that some politicians and businessmen did at the time of the real estate boom have not ended with negative consequences for the Novelda City Council” and has highlighted that “The important thing is that, in this first instance, we leave behind a claim of almost six million euros and we are closer to solving one of the most complicated issues of the obscure municipal management of the past.”

The judicial ruling of the contentious-administrative which considers inadmissible the appeal filed by Abanca against the Novelda City Council is the first step towards the resolution of a conflict that began in 2010 when the Agua Deportivo de Novelda Health Center (CSAD) closed its doors just two years after its inauguration due to its low profitability. Five years earlier, in 2005, the commercial CSAD had been awarded, under the government of the Popular Party, the construction of sports facilities, whose project included indoor and outdoor pools, as well as a gym, paddle tennis courts, tennis courts and sports centers, which were built on a plot of 11,000 square meters of municipal ownership, in exchange for the exploitation of the site for a period of thirty years and a fee of 900,000 euros that entered the City Council. Likewise, the specifications that governed the award, “Oversized” According to Ñíguez, it contemplated that the City Council, once all the facilities were completed, would pay the successful bidder 80,000 euros per year for the reservation of use for associations and groups of all the same in certain time zones. It would be in 2008 when the concessionaire would open the indoor facilities of the enclosure and, just two years later, it decided to close it due to lack of profitability, as it did not reach the minimum of 1,300 monthly users which, as contemplated in the specifications, would give viability to the project.

Iván Ñíguez, spokesman for the Socialist government of Novelda INFORMATION

After the closure of the facilities, the CSAD company enters a bankruptcy creditors and, after a long period under the tutelage of a bankruptcy administrator, in 2016 a court in Valencia declares the conclusion of the bankruptcy, due to non-existence of goods and, therefore, the extinction of the commercial. During the years of closure, the facilities were looted and vandalized and the City Council could not act on them until in 2018, after two years of managements, the property of the Centro Salud Agua Deportivo became municipal property after the termination of the concession contract, the seizure of the guarantee of 234,342 euros deposited as collateral by the company and the signing of the receipt of the property. It is precisely against the agreement of resolution of the contract adopted in plenary session against what the financial institution creditor Abanca filed an appeal for understanding that the City Council, now owner of the facilities, is the debtor of the loan that in its day granted to the concessionaire for the construction, management and operation of the sports center, a maxim that denied defending of the Consistory and that the tribunal It has ratified in the first instance by considering that the creditor company was on the concession, not on the property and that, furthermore, it is not part of the concession contract.

The outdoor sports courts of the Health and Water complex in Novelda. ÁXEL ÁLVAREZ

Meanwhile the municipal government, confident that the possible appeal will meet the same fate as in the first instance, plans the future of the Centro Salud Agua Deportivo. In this case, the opening, in the medium term, of the outdoor courts and the entire interior part, except the swimming pool, is proposed since, as the Councilor for the Treasury has pointed out, “We cannot deceive ourselves and we must be aware of the City Council’s economic situation. With the debt that we still carry, we are not in a position to maintain heated swimming pools “. In this sense, Iván Ñíguez has stressed that in the future, after conducting a feasibility study, “We will be able to ask ourselves if the indoor swimming pools are recovered or if the enclosure is converted into a second sports hall” For the city.