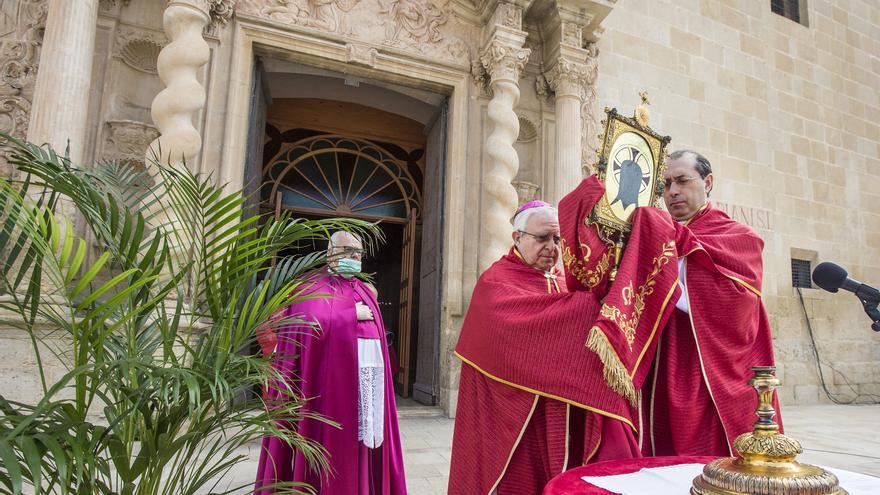 The vice president of the Generalitat, Mónica Oltra, believes that it will be “complicated” to be able to celebrate the feast of the Santa Faz in Alicante on April 15 due to the epidemiological situation due to the coronavirus pandemic. “A miracle would have to happen“, he said, in order to celebrate the traditional pilgrimage and the transfer of the relic that gathers thousands of people every year in the provincial capital.

During his appearance after the plenary session of the Consell, and after being asked by journalists about the Holy Face, Oltra recalled that this year the Magdalena festivities have not been celebrated in Castellón nor will the Fallas be celebrated in Valencia because, has emphasized, “we cannot afford to throw away all the effort of these weeksIn this regard, the regional spokeswoman has considered that “the restrictive measures tire us all”, but has trusted that “other years will come, or we will have the population vaccinated and we will be able to have relationships as we knew them before.” in these moments, he has stressed, “it can not“.

The spokeswoman for the Valencian Executive has explained that the perimeter closure and the restrictive measures agreed this week will be extended until April 12 and recalled that until then no one can enter or leave the Valencian Community without just cause. Neither to go to second residences on the Costa Blanca from other territories of the country, neither during holidays nor at any other time. “The virus does not distinguish if it is Sunday or not. Neither from Madrid, nor from La Rioja, nor Galicia, nor Andalusia … We are not for mobility, “said Oltra, while rejecting that this issue has anything to do with any kind of phobia of visitors from other communities.

Mónica Oltra has stated that epidemiologists are warning that if there is mobility and social relations at Easter, a fourth wave of infections. “We know what works, which is restricting mobility and social relationships. When the curve (of contagions) is restricted, it plummets. It is not about having a phobia of anyone, in any case it is a phobia of the virus, which knows neither holidays nor borders “, he stressed.

Regarding the possibility that international tourists can reach the Valencian Community, the vice president has pointed out that the perimeter closure “affects national mobility” and has said that the autonomous communities “do not have powers” to regulate international mobility, the Schengen area, which is “marked by decisions of European institutions“.

“We, obviously, are convinced that all the sanitary guarantees are being fulfilled, such as having a Negative PCR to preserve the health of all “, has expressed in relation to the arrival of international visitors.

On the other hand, Oltra has acknowledged that within the Consell there were “different proposals and views” on the measures to be adopted from next week, especially in the closed spaces of the hotel industry, but finally it was decided to open it with the 30 % of capacity. At the meeting of the Interdepartmental, he explained, “several proposals were considered, various scenarios, there were diversity of proposals on what measures would have to be adopted,” he admitted. However, he recalled that although restrictions are relaxed somewhat “we are not out of danger“And he has asked the citizens for” prudence and caution. “That holidays come does not mean that there are parties,” he defended.