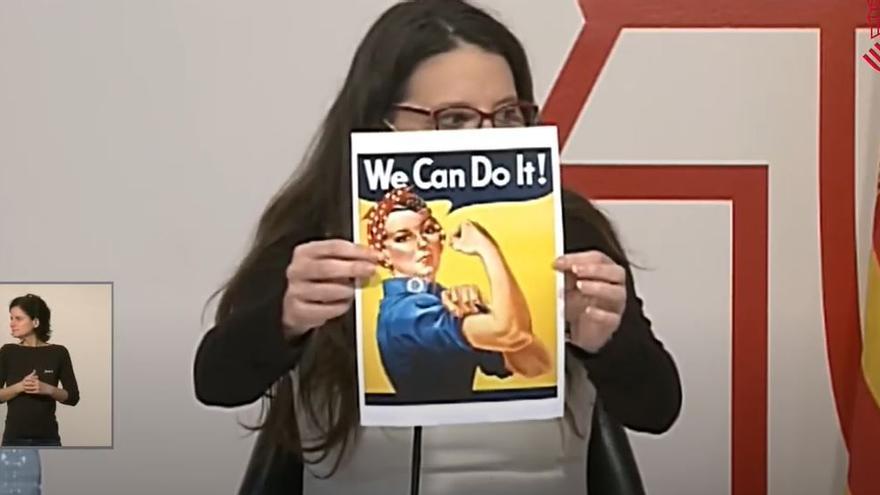 The vice president of the Consell, Mónica Oltra, has considered that the Councilor for Equality of Sant Joan d’Alacant and vice-president of the Diputación, Julia Parra, from Ciudadanos, “maybe a little more should be documented about History, the history of feminism, the history of women” after deciding that will not distribute the commemorative poster of 8M promoted by the Ministry of Equality and Inclusive Policies when considering it «Political and ideologized».

The spokesperson for the Generalitat explained that the image on which the Generalitat’s campaign was inspired is based on a poster that was designed in 1943, when men went to fight in World War II “and women are told to join the factories.” It is a poster that includes the well-known motto “We can do it“, which served to empower women, the vice president recalled.” When the men returned from the war, the women refused to go home “and stop working, said Oltra, who has valued that these events are “part of feminist history”.

It should be remembered that the mayor of Sant Joan d’Alacant valued that the main image of the campaign, called Essentials, is a woman with her fist raised, “a gesture traditionally associated with to a certain political option“, So he assured that” he does not represent us all. ”

Oltra has considered that knowing where that poster comes from and what it represents is a matter of “general culture“And that the councilor” maybe she should do a little more research on history, the history of feminism, the history of women. “If you do not want to spread this campaign, the vice president said,” qthat it is not at least for such a poor explanation“.

During her weekly appearance, the vice president of the Consell has claimed that this March 8 will be “different” from a year ago, “but equally vindictive“, and has indicated that this year we must reinvent ourselves to fit the” essential “claim with the recommendations of the health authorities for the coronavirus.

The Minister of Equality and Inclusive Policies explained that this year’s campaign by the Generalitat seeks to pay a “modest tribute” to all women, who are the ones who support the world every day and what is necessary for life. that this campaign “puts life at the center”, and that is why she will not be the one who “aims to not respect life”, so she will make a protest 8M, “as every year”, and following the recommendations against the pandemic.

Oltra has opined that, as the 8M commemoration has been called by the feminist movement, “in a decentralized way, few in number and in a way that distances and all sanitary and hygienic measures can be maintained”, the protest call fits with sanitary recommendations.

For Oltra, there is still “much to do, much to change” in this area, and therefore the Valencian Government will open on March 8 first period of participation of the future Valencian Equality Law, which aspires to be “ambitious, transformative and effective” and to advance rights without leaving anyone behind. A law that is also sought to be “as transversal as possible” and that from an ecofeminist perspective transforms all sectors: economic, labor, educational and social and health, as well as the territorial model and sustainability, he explained .

The vice president highlighted that the campaign vindicates the women who sustain our lives and they make it possible for life to continue, from the iaias or mothers, to cleaners, caregivers, health workers, scientists, replenishers, social workers, civil servants or entrepreneurs. He stated that, with the pandemic, it has become even more visible that the work carried out by women “is essential and cannot be stopped”, because with those who raise, care for and heal, and that is why this year “all are honored women”.

Oltra has emphasized that the coronavirus does understand class and gender, since its impact on women is greater in the total number of cases despite the fact that the prevalence is higher in men, due to the roles, the gender inequalities and the precariousness of life support tasks, which are mostly performed by women.

As she explained, scientific studies show that women have a greater burden of precarious jobs and the underground economy; They are mostly in the first line of care and social health care work, and in care and response to the disease, especially nurses and nursing and geriatric assistants.

He recalled that the saturation of the health system meant, among others, that in the first weeks of the pandemic, women could not be accompanied during childbirth, and he alluded to the double workload that combining teleworking with care of older and boys and girls.

It has also pointed out that gender violence has intensified in the pandemic, due to the confined coexistence with their abusers and the imposition of social distance.