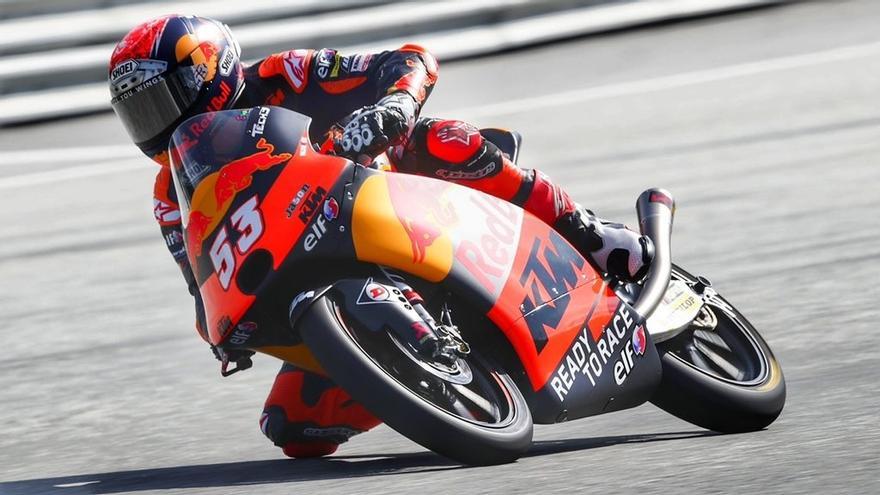 Denis Oncu (KTM) got the first pole position for Turkey being the fastest in the official classification for the Styrian Grand Prix of Moto3, at the Red Bull circuit in Spielberg, ahead of the Spanish Sergio Garcia Dols (Gasgas) and Italian Romano Fenati (Husqvarna).

Oncu was the fastest with a record of 1: 36.453, just 24 thousandths of a second over the Spanish and 53 compared to the transalpine, in a classification in which up to fourteen drivers finished in a narrow margin of less than four tenths of a second and in only two tenths the first seven.

From the first classification, the Italians Dennis Foggia (Honda) and Romano Fenati (Husqvarna), as well as the Argentine-Hispanic Gabriel Rodrigo (Honda) and the Japanese Tatsuki Suzuki (Honda), managed to pass to the second.

All the Spaniards who opted for it, Carlos Tatay (KTM), Xavier Artigas (Honda) and Adrián Fernández (Husqvarna), were left out of the second classification.

In the second classification Ayumu Sasaki (KTM) made news again when he suffered a new fall, as it happened to him in the third free session, which then did not prevent him from getting the best time, although this time the Japanese rider grabbed the handlebars of his motorcycle and managed to return to the asphalt without having to go through their workshop to repair the damage.

On the track, the performance of one of Jorge Martínez ‘Aspar’s pupils, Izan Guevara (Gasgas), was surprised. He climbed to the first place, chased only two thousandths of a second by Foggia, who was coming “hot” from the first classification, with the South African Darryn Binder (Honda) third.

That situation did not last long because in the last six minutes the leader of the world-wide one, Pedro Acosta took to the front of the table, with a record of 1: 36.575 that lowered Guevara’s stopwatch by just sixty thousandths of a second.

The Moto3 riders seem to have returned from the summer holidays with a lesson learned regarding the struggles to wait for the slipstream of their rivals and it could be seen that each of them went to their ball in search of the best possible result. And that’s how, completely alone, Sergio García Dols (Gasgas) climbed to the top spot.

García Dols completed his sixth lap of the Austrian track with a time of 1: 36.512 that gave him the first place by 63 thousandths of a second ahead of Pedro Acosta, and a lap later he again scratched a few thousandths of his personal best to put it in 1: 36.477, although on the next lap his momentum led him to roll on the ground at turn three, the most difficult of the entire circuit.

In the end, Sergio García Dols flew through the air at that point and left the circuit ostensibly limping of his right leg, with a strong blow to the knee as he explained later, while on the asphalt the Turkish Denis Oncu (KTM) took away the best time of training by just 24 thousandths second to get the first pole position of his career.

The third place went to Romano Fenati, with two Spaniards forming in the second starting line, Pedro Acosta and Izan Guevara, who benefited from the withdrawal of his fast lap to Jeremy Alcoba, who went from fourth to ninth place, which placed Dennis Foggia sixth.

In the third place were the Spanish Jaume Masiá (KTM), Darryn Binder and Jeremy Alcoba himself, with Gabriel Rodrigo, the Italian Niccolo Antonelli (KTM) and the British John McPhee (Honda), in the next.