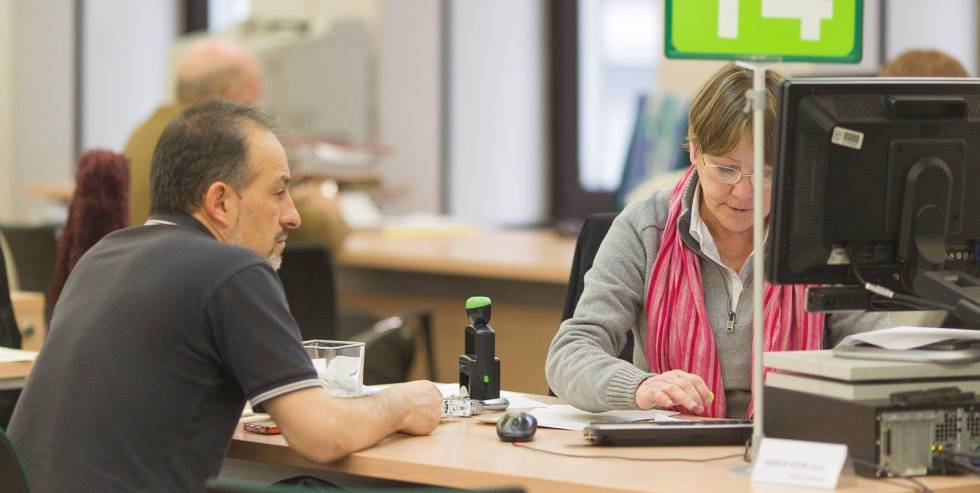 The data of the last count of public employees of the Ministry of Territorial Policy and Public Function determine that currently in Spain there are more than two and a half million people (2,598,481) who make up the group of workers in public administrations. A figure that, although it has grown by only 769 troops compared to the month of January, is included within the total volume predominant in the last decade. However, the data in the report show that the aging of the workforce and the contractual instability of a large part of its workers continue to be the problems to be solved.

According to the Statistical Bulletin of the personnel at the service of the Public Administrations, one in every five employees of the General State Administration (AGE) is over 60 years old. In this age group – which results from the sum of those between 60 and 64 years old: 34,242; and those over 64: 5,003, as they appear disaggregated in the report— 39,245 workers are concentrated, 19%, of the 196,785 of whom the ministry has their date of birth. The other 33,610 that remain until reaching 230,395 that make up this group are not included in the tables for this reason.

The alarm of the aging of the staff of civil servants and public workers has sounded constantly among the unions during the last 10 years, in which they have been denouncing the elimination of replacement fees – the calls for new jobs that are made to cover vacant positions, for example due to retirements. “More than 11,000 jobs have been lost in the last decade for this reason,” denounces the Central Sindical Independiente y de Civil Servants (CSIF). “What is needed is a human resources evaluation plan that results in a specific job offer that meets the needs of the different Administrations, and that now, due to the pandemic, have been even more exposed”, they add.

From CC OO, however, they take as a reference the data pertaining to the public sector of the Active Population Survey (EPA) corresponding to the second quarter of 2020 – in which the total number of workers rises to 3.2 million, since include groups other than those of the Public Function Bulletin– to denounce that 22,100 public jobs have been lost in this period. Something that they attribute to a constant trickle that originates from the freezing of public job offers that occurred between 2012 and 2017.

“When public employment offers were approved, from their publication to the culmination of the inauguration, it could take two or even three years. If you add to this the fact that the previous crisis entered in 2008, and that already in 2010 access to the Administration began to slow down until it ended up being closed dry in 2012: white and in the bottle “, points out Miriam Pinillos, secretary of Public Policies of FSC -CC OO.

To the remarkable aging of the AGE staff – in which only 4,953 employees are less than 30 years old – it is added that, of the more than two and a half million public workers that are recorded in the bulletin (incorporating those who belong to to the public sector of both the autonomous communities and the local Administration), 661,394 have either a temporary (774), temporary (125,137) or interim (535,483) contract. This results in one in four workers (25.4%) having unstable contracts.

“Although in the AGE the percentage of temporary employment is 7% (17,654 workers), where the figure grows significantly is in the autonomous communities, mainly due to the health and education sectors,” explains Carlos Álvarez, federal manager of the AGE of UGT. “It is unsustainable that there is such a high percentage of temporary employment in the field of public service. It makes little sense. One thing is that you need it sometimes to solve conjunctural situations such as now in health with the issue of the coronavirus. Or to implement the ERTE issue and all these grants, which are temporary, which are processed in the State Public Employment Service (SEPE), but not until these figures are reached, far from it. It is something that is still being debated at the sectoral conference and we are waiting for the ministry to send us a concrete proposal that it finds to address this situation, ”adds Álvarez.

According to CSIF, public administrations have only stabilized 17.9% of the interim positions, taking into account the balance they received at the last follow-up meeting of the Agreements for the improvement of public employment and working conditions signed with the Government in 2017 and 2018. In them, the stabilization of some 250,000 places between 2018 and 2020 and the reduction of temporary employment to 8% was contemplated. “Although the agreements came to alleviate, precisely, the temporality, they have not been fulfilled. There is a breach of employment and, within this, of the stabilization of the workforce ”, completes Pinillos.

The current situation of organizations such as the SEPE, overcome by the avalanche of temporary employment regulation files that resulted from the crisis, or of the Social Security itself, in charge of processing the minimum vital income (IMV), which is causing so many problems Due to its “excessive technicality”, according to the unions, it is leading to the public administrations being in a moment of unknown vulnerability. “All the paralysis that has occurred in incorporations means that services cannot be covered, it should be done at a time like this. We applaud this new social demand that the Government has launched, but it had to have been accompanied by an urgent increase in staff, ”Pinillos laments.

“It cannot be that jobs continue to be destroyed in the public sector now that is when people need it most. The AGE has suffered a continuous deterioration that has led to tension like never before ”, they maintain from CSIF.