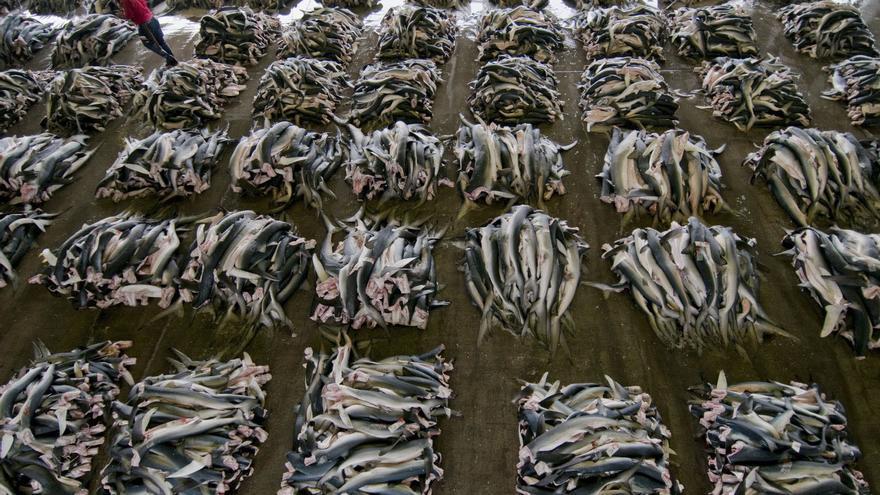 consumption of shark fin soup, as well as other preparations with this appendage, very popular in several countries, is decimating the populations of these animals. Furthermore, by cutting off their fins and often leaving them alive, they are subjected to slow death throes.

Now, the European citizens’ initiative ‘Stop Finning-Stop theTrade’ has managed to gather one million signatures to end the shark fin trade in the European Union (EU), some animals that are “essential in marine ecosystems”.

In the EU “sharks continue to be caught industrially” and “large profits are made from the trade in their fins”, assure in a joint note the NGO Stop Finning Deutschland eV and the international marine conservation organization “Sea Shepherd Global”, who advocate its “immediate end”.

In recent days, a “great wave of support for this initiative” has emerged, which has been endorsed by “numerous celebrities from the world of sports”, among others.

Now, the European Commission (EC) “is obliged to react to the request to ‘Stop Finning-Stop theTrade’”, they say.

It is, they indicate, an “immense problem”, since “every year millions of sharks are killed by humans, often just for their fins”.

“Three EU countries are among the twenty that capture the most sharks worldwide, Spain being one of them,” they state.

The populations of these animals “so important” for the oceans “are in decline”, since “They have been reduced by 70% in deep water since the 1970s.”

Europe “trades with specimens captured by ‘finning’ (removal of shark fins) in other countries,” they specify.

In addition, “it is unknown if these fins come from species protected by the Convention on International Trade in Endangered Species of Wild Fauna and Flora (CITES)”, therefore, “if the fin trade were prohibited in the EU through this initiative, we would end the unnecessary slaughter of sharks.”

The spokesperson for this European citizens’ initiative, Nils Kluger, assured that “it is urgent that the EU act once and for all” and added: “now we have the strong support of citizens to put an end to the shark fin trade in Europe ”.

This initiative has been supported in Germany by the well-known marine biologist and youtuber Robert Marc Lehmann; in France, the nature film director Hugo Clement, among others, has defended the cause, while from the world of sport the Austrian tennis player Dominic Thiem and the German footballer Kai Havertz have also supported it.

In Spain, the actress Toni Acosta or the award-winning actor, screenwriter and writer Carlos Bardem have also shown their support in networks the end of the shark fin trade.

Outside the EU, the initiative has received samples of defense from, for example, the activist Ocean Ramsey or the actor Alec Baldwin.

But shark fin soup, which is only one of the purposes for which these appendices are intended, apart from not providing relevant nutritional benefits, can be harmful for human consumption, due to high mercury content which has shark meat. This was warned by a study by the Department of Chemistry and Biochemistry at Florida International University (FIU) in which the Spanish researcher Laura García Barcia participated along with another expert, Demian Chapman.

This research showed, after analyzing 267 samples of shark fins from the nine most common species in Hong Kong markets, that in all of them the content was between six and ten times the limit set by the Hong Kong Center for Food Safety, which is 0.5 parts per million.

The hammerhead shark is the one with the most mercury concentrated, with 55.52 parts per million, while the United States Food and Drug Administration (FDA) considers the consumption of fish and shellfish with more than 0.5 parts to be dangerous. per million mercury.

The high consumption of mercury by humans can cause problems in the central nervous system and, if it is ingested frequently during pregnancy, there is a risk that the child is born with limited cognitive development.

Florida International University estimates that about one hundred million sharks die each year victims of legal, illegal or accidental fishing. Additionally, nearly a third of the species included in the shark fin trade are threatened with extinction.

There are countries where fishermen carry out the terrible practice of shark finning or shark finning, which consists of capturing the animal, cut off its fins and return it to the sea, where they end up dying shortly after after a slow agony.

This form of animal cruelty has been condemned by the European Union and has led some restaurants and North American states to ban shark fin soup in a country where, although shark fishing is prohibited, its importation is not. This video sums up some of the harms of this popular culinary dish.

Also Read  'It will stay in our hearts': Port Talbot prepares to bid farewell to its Banksy | banksy

In the case of Spain is the second country that fishes the most sharks -only surpassed by Indonesia- and an important exporter of fins, although according to García it does so in compliance with the law, taking full advantage of the animal. The meat is sold in Spain although the fins are exported to Hong Kong.