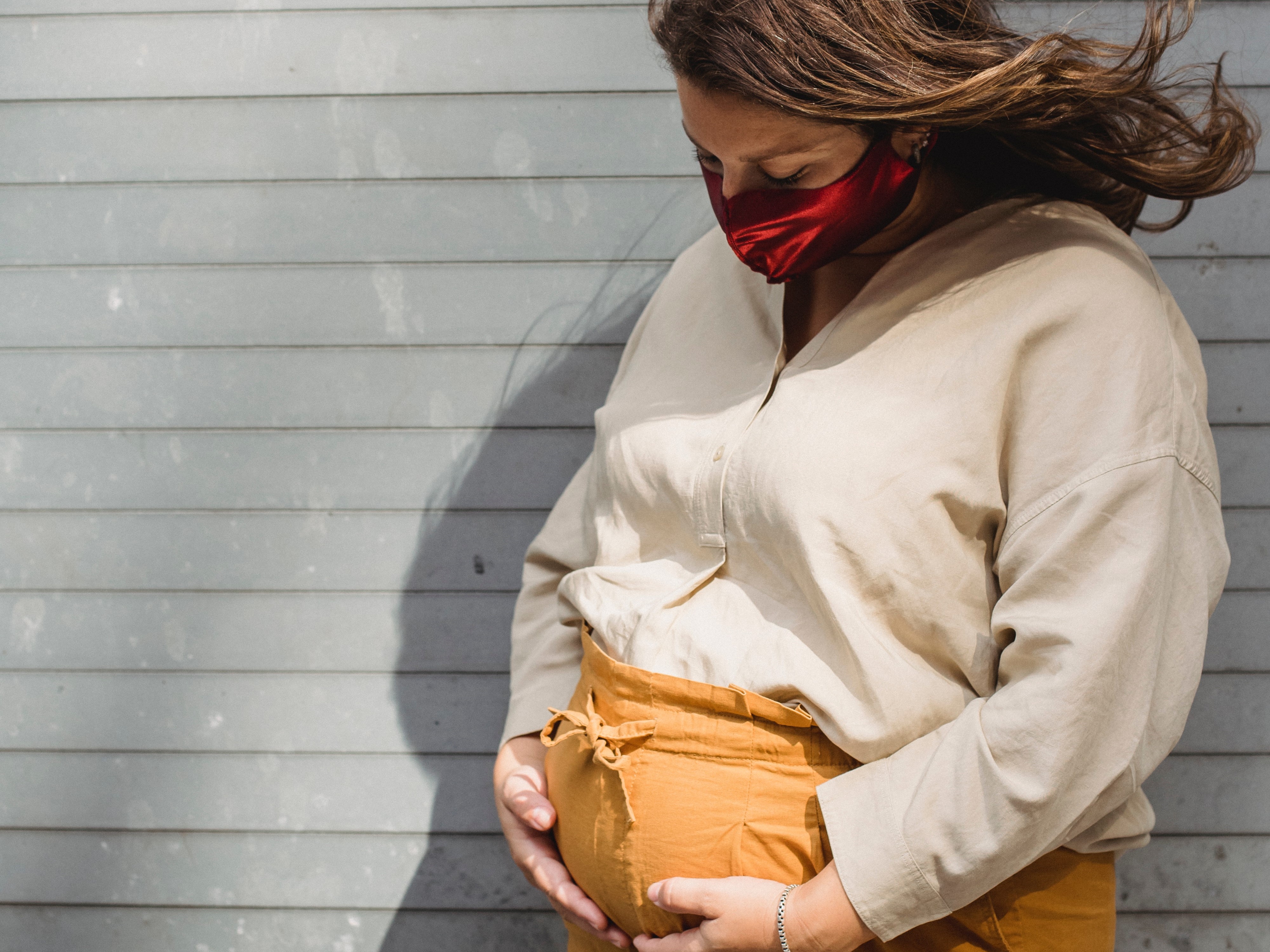 Laura learned that she was pregnant in February 2020, just a month before the pandemic broke out that has changed everything in the last year. The way in which women live their pregnancy, childbirth and postpartum processes has even changed. Laura, for example, recognizes that the pandemic influenced her pregnancy both physically –because she was barely able to move or exercise– as well as emotionally and socially. “The strict confinement caught me during the first trimester and beginning of the second trimester, with a daughter who was just two years old, so my husband and I had to take turns working and taking care of her. In addition to the lack of exercise, I had moments of great anxiety and worry, which led me to eat more. I gained more than 20 kilos ”, he explains. In May 2020, the Ministry of Health published a document with information and guidelines for pregnant women during confinement. However, the Covid-19 crisis has not been easy to deal with emotionally for many pregnant women, who, according to various studies, have shown a greater presence of symptoms of anxiety and depression.

Laura admits that she was very worried about getting infected for fear that something would happen to her or her baby, but she was also distressed by “the medical appointments for check-ups and ultrasounds”, to which she had to go alone, and “the delivery protocols so rigid that are applied in many hospitals ”. Restlessness and uncertainty were also present throughout Leticia’s pregnancy, who gave birth to her second child at the end of February in Madrid. In her case, loneliness was also present in the face of the couples’ attendance restrictions at medical appointments and, especially in the final stretch of pregnancy, the fear of contagion. However, she did not experience the choice of the hospital for the delivery with anguish, since they assured her a safe but respectful development of the process. More or less rigid protocols depending on the hospital, but in all of them the presence of the mask during delivery.

Deliver with a mask

Weeks before the probable date of delivery, Leticia was informed in detail of the protocol that was being followed in the hospital they had chosen for the delivery: she would have to undergo PCR at the time of admission and during delivery she could be without a mask, except in the moment other professionals came in, since then he would have to put it on. Leticia does not remember the discomfort of its use at the time of delivery, but she does later, in the room. “It was worse having to be aware of putting on the mask when we were already in the room, when you are more aware of breastfeeding,” he says.

Laura gave birth in mid-October 2020. It was an induced labor and she points out that she and her partner were able to be alone throughout the dilation. “At that time when we were alone we would take off our mask to see our faces, so that I could breathe (or scream), to kiss each other. When the health personnel came in, always wearing it ”. How has it been to give birth with a mask? She replied that the time she was in the delivery room she wore a double surgical mask, and although she does not remember that it bothered her during the delivery process (”I imagine she was so absorbed by what was happening that I even forgot), it did bother her no being able to see your child well and not being able to kiss him or his partner. “In the emotional aspect the delivery would have been different in other circumstances. To be able to kiss each other, to see our faces at that moment … I am a little sad about that memory ”.

According to Laia Casadevall, midwife and author of Guide to Conscious Pregnancy, the mask can become annoying especially in physiological deliveries, since, in their opinion, “it limits communication and is one more way to medicalize childbirth”. In addition, he points out that for some women it can be associated with feelings of claustrophobia and lack of oxygen. “We know that wearing a mask for long periods of time and in stressful situations can make gas exchange difficult and this could have a direct impact on the baby. For this reason, the Royal College of Midwives in England issued a statement in July 2020 against the widespread use of the mask by pregnant women during childbirth ”, he explains.

The matron Nazareth Olivera Belart recognizes that the use of a mask during childbirth is a very controversial issue: there is a fear of contagion, and understands the need for its use, but also finds that how a childbirth is experienced with the obligation to use a mask depends a lot on each woman and of each process. “Some women verbalize that it is very annoying, but for others it is not. Some are calm, others make a feint and need to take it off. A woman without an epidural, moving, changing the rhythm of breathing, is not the same as a woman with an epidural that is calmer ”, she explains. In general, the use of the mask is punctual, when the health personnel enter the dilations or at the moment of the expulsion. The time that health professionals stay depends on the care burden (which allows them to monitor in a more individualized way or not) and the type of delivery. “In a childbirth without an epidural, women require us, of course, to be more present. The rule is that the mask must be worn. However, it is striking that people who do sports are exempt from wearing it or that you can even take it off to smoke on the street. A woman in labor can not? At the moment of expulsion it is inconvenient because childbirth is physical labor. That is why I believe that we always need to individualize and take care of the well-being of women, taking into account our personal protective equipment ”.

Is it necessary for a woman in labor to wear the mask if the PCR test has been negative? Given the lack of consensus in this regard in Spain, hospitals take into account the precautionary principle and their protocols mark the use of the mask as mandatory during the delivery process. Nazareth Olivera explains that its use is mainly due to false negatives in PCR, but again insists that a rational use of the mask should be made. “We frequently see asymptomatic women who later test positive on PCR. It is known that health personnel were the most infected when the pandemic began, despite the use of protective equipment. We are exposed and that also makes us potential transmitters to others. However, childbirth is an intense physical process, as well as an emotionally important moment. We must be able to individualize and make exceptions as they are done for patients with respiratory problems. Seeking the well-being of the woman in labor, minimizing the use of a mask at certain times and at the same time ensuring the protection of the personnel who are with them during the delivery process ”, he says. In the event that the test has been positive, it depends a lot on the hospitals, but according to Nazareth, the usual thing is that nothing changes. “The delivery must be attended in the same way, with the same protocols. Health personnel must wear appropriate protective equipment ”.

Skin to skin and initiation of breastfeeding

The pandemic has also had an impact on the rights that had been won in recent decades in terms of accompaniment and care during pregnancy, childbirth and postpartum. During this year the pregnant women have attended tests without an escort and at the time of delivery not all have been able to be accompanied. In some places, (even) more caesarean sections than strictly necessary have been performed and there have been many separations between mother and baby.
From the birth is ours they insist that at present “there is no evidence neither so that the couple cannot accompany the mother in gynecological visits, nor that they cannot accompany the mother during the delivery, nor to separate the mother. mother of her child, regardless of the status of the PCR ”. There is also no evidence to suggest that a pregnant woman who has tested positive for COVID-19 should undergo a protocol cesarean delivery.
What happens if a woman at the time of delivery tests positive for COVID-19? As Nazareth Olivera explains, the recommendations of official bodies such as the Ministry of Health or the Spanish Society of Neonatology say that the baby must also do skin to skin with his mother and recommend, if the woman wishes, to start breastfeeding. In addition, they point out that the woman can be accompanied throughout the birth process, with the only condition that the couple does not go abroad. Once in the plant, the use of a mask and frequent hand hygiene is recommended to reduce the risk of contagion to the baby and the entry and exit of health personnel to the room is minimized. Unfortunately, Olivera also maintains that in some hospitals the baby is separated from its mother. “The woman enters a COVID plant and cannot be accompanied either during delivery or postpartum. And in some centers a cesarean section is even performed on women who test positive, without further clinical indication. It is something really serious that has no justification ”, he concludes.