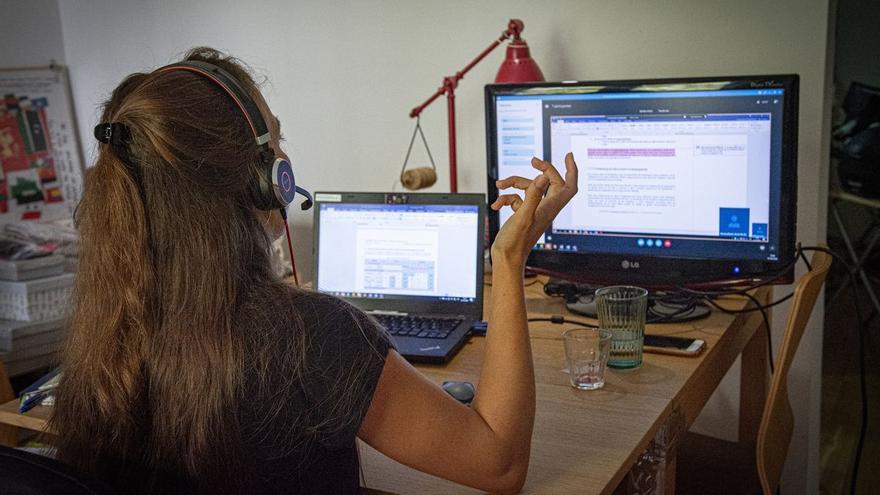 The rule agreed between the Government, the employer and the unions contemplates the obligation that the agreements that regulate telework be sent to the employment offices. To questions from EL PERIÓDICO, a newspaper belonging to the same communication group as this medium, the Ministry of Labor reports having registered a total of 105 conventions and agreements with clauses that regulate remote work, which affect some 561,000 people workers.

That is to say, of the 16.1 million wage earners currently active in Spain, only 3.5% They have an agreement or agreement that specifically regulates this modality. The levels of telework, however, are higher as revealed by the INE data. They confirm that, in the second quarter of this year, the 9.4% of Spanish workers They operate more than half the days of the week from their homes. This figure is significantly lower than the confinement times, when a peak of 16.2% teleworking was reached. And far from the potential of the Spanish economy. A waiter or a shop assistant will not be able to telecommute, but the Bank of Spain It is estimated that 30% of those employed in Spain could work remotely.

How are you telecommuting?

In Spain, teleworking is more informal than regulated and there is still a long way to go to generalize this modality. “We are still in a transition phase and in most cases neither companies nor workers are clear about which model they want to apply. Right now in the companies where you telecommute, self-management is being imposed ”, points out the professor of labor law at the University of Barcelona (UB), Jordi Garcia Viñas.

The majority formula, according to the unions consulted, is the hybrid: some days at home and others at work. In large companies like Iberdrola, Nestle O Axa the format that they have agreed with their workers is ‘3 + 2’, three at the office and two at home. These same sources also indicate that they are having more success in the agreements of large firms, than in the sector agreements; which hurts (for now) SMEs. “It will not reach those levels of telework that were expected at the beginning of the pandemic, but all the new agreements that are being renewed address it and the levels will go to more”, points out the secretary of union action of the CCOO of Catalonia, Cristina Torre placeholder image.

Why have so few agreements been signed?

The remote working rule leaves the Collective negotiation, via agreements or company agreements, the deployment of this new labor reality. The problem is that currently the negotiation of agreements is blocked and with a minimum coverage. The high bargaining activity in other areas -erts, labor reform and pensions- and the rise in inflation is muddying the agreements.

“The law does not specify and we have to specify ourselves. And the premise is that teleworking cannot entail a cost for the worker. The question is how we count it and what goes into that cost,” says the secretary of union policy of UGT de Catalonia, Núria Gilgado. “So far the few agreements that have been signed do not risk and set a monthly payment of between 35 and 55 euros per month for teleworking”, points out the labor lawyer and professor at the UOC Pere Vidal. The question of costs is a key element, as there is a general tendency, especially among SMEs, to reject the idea that remote exercise translates into more costs.

A recent survey among Pimec associates indicated that one in three SMEs bet on teleworking, but 9 out of 10 It did not plan to pay any additional compensation or payment to its workers for the related expenses. “We are clearly in favor of teleworking, but its implementation is very complex. If we do not agree on flexible conditions, the final effect that can occur is that companies end up deciding not to telework. And that would be a failure ”, affirms the general secretary of Pimec, Josep Ginesta.

What are the risks of not regulating teleworking?

Extending the current moment of transition that teleworking lives has several risks, according to the different sources consulted for this report. “It is important to make clear the conditions of when the company can decide to reverse telework,” warns the lawyer Pere Vidal. The unions, for their part, fear that a duality will be installed between those who are employed in large companies and who have facilities to telework and those who work in SMEs and can barely exercise it.

The centrals also warn that there are companies that take advantage of the fact that there is no signed agreement to transfer part of the costs to the pockets of the workers. “We are seeing that many people, due to the advantages of mobility or conciliation, end up assuming a cost to be able to telework. And that in the end it is still a salary reduction “, says Gilgado, from UGT. There companies, as Ginesta, from Pimec, warns, that if remote work causes them to increase costs, they can back down.

A Gordian knot to which, so far, few have found a solution, as revealed by the data from the Ministry of Labor. At the moment, as the jurists consulted agree, all these matters have generated very few legal disputes and are not a reason for labor disputes either. Although they do not rule out that what is not a problem today may be tomorrow.