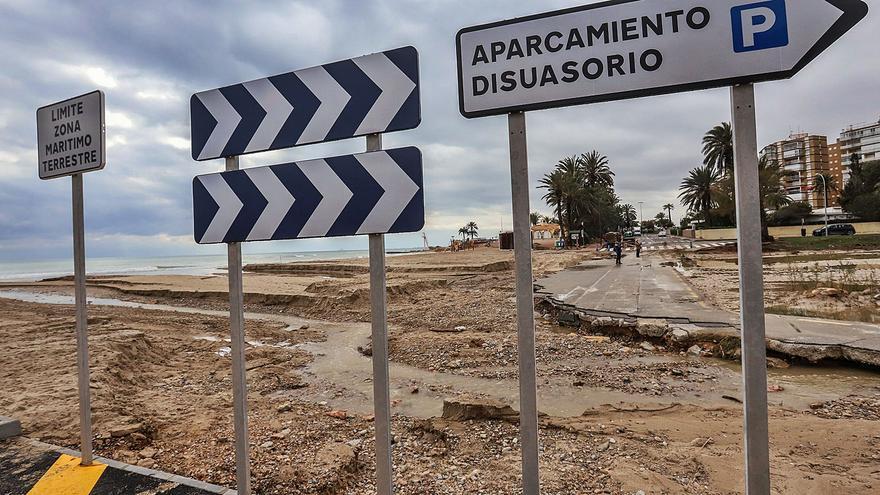 The torrent of water by DANA that fell in September 2019 through the bed of the Nacimiento River, usually dry, it destroyed the stretch of road that coincides with its natural mouth at La Glea beach. Storm Gloria, in January of last year, increased the damage on this highway that connected the first coastline of Campoamor with the rest of Orihuela Costa. The road, on Avenida de las Adelfas, has been closed since then, a year and a half ago, isolating the residents of this urbanization who are now forced to make a detour of about three kilometers to go from one point to another of the same , to the N-332, if you want to buy in the supermarket, go to the pharmacy or the health center, which have been located in one of the two divided sectors.

According to the refusal resolution issued by Costas in October, the section, of about 100 meters and which crosses the mouth of the Nacimiento River, has a demarcation approved in 2016 according to which the works would be located on land in the maritime-terrestrial public domain and within the shoreline of the sea, so it only authorizes the restitution of the pedestrian walkway, with removable slabs, linking both sides of the ravine, but not the road traffic. According to their technicians, laying paving “It is considered detrimental to these lands” that, they point out, are floodable and conclude that the demolition suffered requires the reconstruction of the entire section of the road that disappeared on the sand of the beach, which, says the resolution signed by the head of the Provincial Service of Costas Rosa de los Ríos, is contrary to current regulations.

The Consistory requested in December to rescind that resolution, based on the special urban planning of the “Campoamor Residential Complex”, approved by government decree in 1969, where this road is collected. This planning is prior to the demarcation of the Coasts in that area and was declared of public interest, which is why the local administration considers that the road and the stretch of promenade should be able to be replaced.

Given the administrative silence on the part of the Provincial Coastal Service, which rejects the request made by the council to annul the resolution on the refusal to replace the road, the City Council has decided to take this dismissal to the courts. The City Council is willing to continue its fight against Costas in court if the appeal filed now is not favorable.

The plenary session of the consistory agreed in its last ordinary session to formally and expressly request the General Directorate of Maritime and Land Public Domain of the Ministry of Ecological Transition and Demographic Challenge the granting, in the most urgent and peremptory period possible, of the mandatory authorization for the execution of the repair and rehabilitation works of the damaged section. In addition, it requests that the recovery of that highway be in the same terms that it presented before the DANA storm, and with the same characteristics that it had since its execution date, as a municipal road, allowing its reopening to both road and pedestrian traffic.

Wooden walkways that are washed away by the rains

The City Council has replaced the promenade and the section of the road right up to the riverbed, where it has powers. The action, for 72,003 euros, has contemplated a detour in the northern part of Avenida de las Adelfas so that cars can go to the southern sector crossing a road next to the old bridge that crosses the promenade, but this is flooded, so the council itself recognizes that it does not meet road safety conditions. In the section of the mouth of the promenade he has put wooden walkways for pedestrians to pass. Some walkways that were damaged by the rains of a few days ago, washed away by the current and whose only solution, for now, is to replace them.