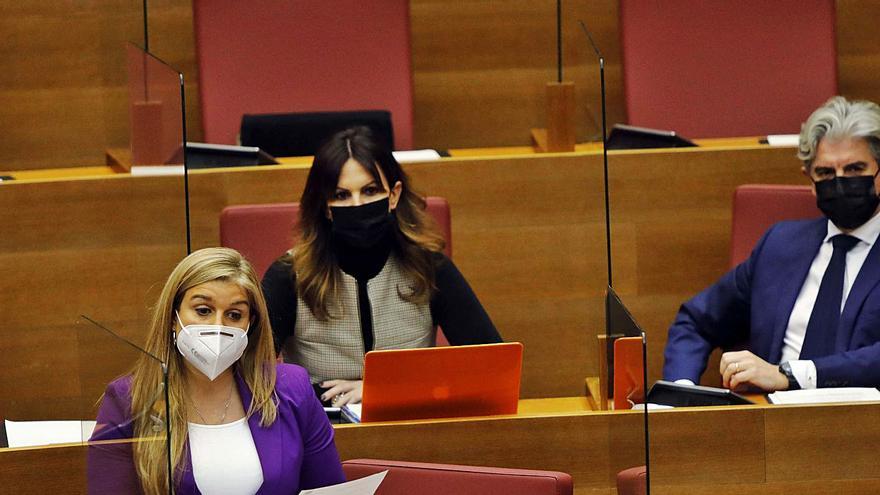 The departure of Isabel Bonig of the autonomous political scene, after her resignation from the seat in the Valencian Parliament, where she held the position of trustee, has forced to look for an alternative. And fast. Next week a control session is scheduled for the President of the Generalitat, Ximo Puig, and yesterday, to the surprise of certain popular deputies, it was reported that it will be Eva Ortiz, deputy spokesperson and right hand of Bonig, who will formulate the question of rigor to the head of the Consell. At the end of the day, the Alicante is currently the most relevant position of the PPCV in the Chamber, but its continuity in the party executive, once Carlos Mazón is praised as president, is in question. Ortiz is out of practically all the pools to occupy positions of organic relevance. It is not ruled out that she continues as deputy spokesperson, but never as trustee.

Councilor in Orihuela, deputy in Parliament and MEP in Brussels are the positions that appear in Ortiz’s political curriculum, who has outlived several presidents of his party during his 19 years of institutional activity. Yesterday, it was she herself who announced that she will ask Puig the question, and at that precise moment some deputies from her own bench found out.

In principle, it will be the popular group that will have to sign the agreement to appoint the new Catalan Ombudsman, pBut there is still no date set as the PPCV heads towards the congress for the renewal of leadership, on July 3. No one doubts that the next leader, who will be the Genoa candidate, Mazon, he will have a lot to say about the election of the new spokesperson, clearly a deputy from his circle of trust.

It seems completely unlikely that the popular group will extend the appointment of its new spokesperson by almost two months, until congress, and although some voices pointed to the possibility that the three deputies -Eva Ortiz, Elena Bastidas and Miguel Barrachina- could carry out a job As a whole, from the ranks of the Botànic yesterday they began to tighten the nuts so that decisions are made and, incidentally, to show that within the PPCV there is still no clear position on the matter. PSPV and Compromís stressed that the regulations of the Courts establish that the control question is made by the trustees, who can be temporarily substituted for very specific issues: illness or temporary disability, or due to absence due to an official trip. They agreed that, due to unforeseen situations, exceptions are usually made, as was done recently in Cs after Toni Cantó slammed the door; but they appealed to the need to make decisions so that the functioning of the Chamber is not affected by the internal processes of the popular. The socialist Carmen Martínez recalled in this regard that, when Mónica Oltra was a trustee of Compromís and could not attend a plenary session, the PP prevented the deputy, Enric Morera, could take the floor.

In the next plenary session, the controversy is also served from the ranks of the Botànic. The Council announced yesterday that six councilors will miss Wednesday’s session and four more to Thursday’s; a dozen faults that have generated criticism from the opposition, but also from parliamentary groups on the left, who recognize the anomaly of so many absences in a plenary session that serves, among other issues, to monitor the Government, although it is difficult if they do not go.

The mayor of Ayora and candidate for the presidency of the Valencian PP, Jose Vicente Anaya, has stood up to Genoa by stay firm in your aspirations and confirm your position of wanting to lead the party. On Tuesday he announced that he will complain to the national leadership because the provincial PP has demanded that he resign from his positions interns before running as a candidate, something that has not been required of other candidates. In clear allusion to Carlos Mazón, the mayor of Ayora questioned the “double yardstick in this process, because for a candidate it is incompatible to hold a position in the PP and present himself to lead the party, and for others the accumulation of positions is not a problem”.

This decision threatens to truncate the aspirations of Carlos Mazon to get a unique candidacy. Anaya announced this Tuesday that he is leaving the position of coordinator of the PP in the province of Valencia to have a free pass and present himself at the XV regional congress of the party to be held in Valencia on July 3.

The mayor thus complies with what is established in the executive committee of the provincial PP, leaving all his positions in the party before opting for the autonomous presidency of the same. Along these lines, he claimed “cleanliness and equality in the process.” For his part, Carlos Mazón reiterated his offer to José Vicente Anaya to join the party board. The Alicante leader expressed his desire that in the next few days they could reach that “Meeting point”.