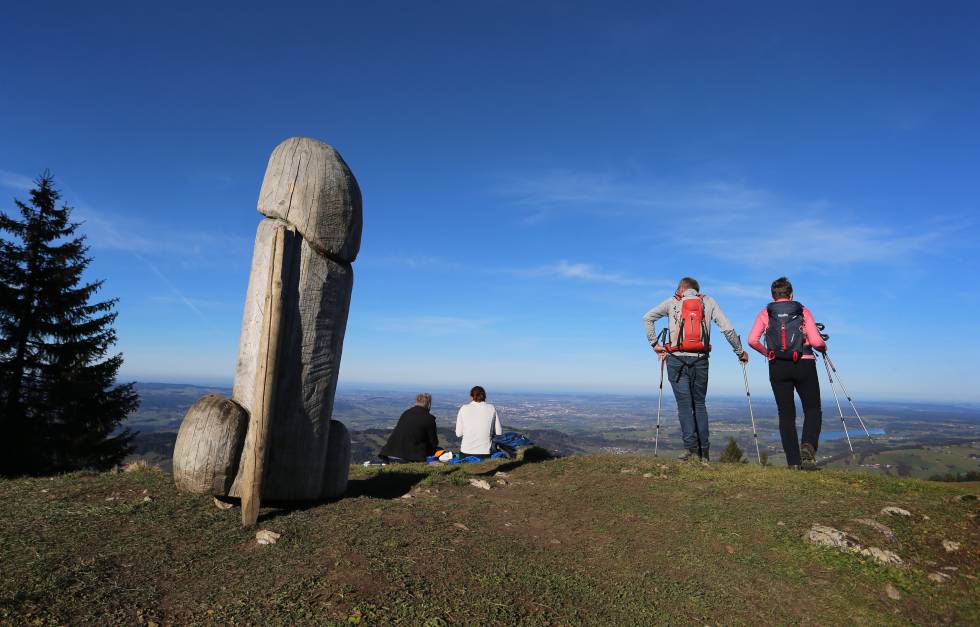 Huge phallus wanted: German police have launched an investigation into the loss of a two-meter sculpture in the shape of a penis. Someone cut it down at its site in a mountainous area in Bavaria last weekend. The figure, made of wood and about two meters high, was last seen intact on Saturday on Mount Grünten, southwest of Munich, near the German border with Austria.

It is unknown who sculpted, moved and planted the sculpture, weighing 200 kilos, of which now only the trunk section and scattered sawdust remain, according to the newspaper Allgaeuer Newspaper. The media speculates with the idea that it was a joke from some friends to another, an unwelcome birthday present that ended up planted on top of a mountain.

Kempten City Police have opened an investigation, informs the DPA agency, after receiving the information that the sculpture had disappeared on the night of Saturday to Sunday. One of the police station agents, Holger Stabik, clarified that they are not clear that the act of logging involves a crime.

“Someone must have sawn it late at night,” he said. Michèle Rief, a woman who rents a cabin in the vicinity of the figure, which is even listed as a cultural monument on Google Maps. A brewery in the nearby town of Rettenberger dedicated its own drink to him and the town’s mayor has lamented the loss of a carving that had dominated the area’s landscape for about four years.

After the disappearance of the Utah monolith by unknown persons, according to the Federal Office of the Administration of Lands (BML), another similar one has been found more than 9500km away, specifically in Batca Doamnei Hill, in the city of Piatra Neamt, Romania.#VIRAL@carmenporter_ pic.twitter.com/oTgR1BYzb8

New monoliths in Romania and California

A monolith disappears in a Utah desert, a fact which has been attributed a local guide, and another appears in front of a sacred mountain in Romania. After the three-meter-high piece of metal that an air patrol discovered last week in a desolate area of ​​the US state vanished as if by magic, another has appeared unexpectedly in the city of Piatra Neamt, in the northeast of the territory. Romanian.

“It is located on a private plot, but we do not know who is the owner of the monolith”, said a person in charge of the office of Culture and Heritage of the city, Rocsana Josanu, collects The Daily Mail. But the piece has arisen in a protected archaeological zone, where, it is believed, a fortress was built in ancient times, destroyed by the Romans.

Unlike the polished surface of the Utah monolith, the Romanian monolith shows vaguely circular markings and poorer workmanship. The land where it has been planted has apparently been removed a short time ago.

Another similar figure has found a group of hikers at the top of Pine Mountain in Atascadero (California), inform CNN. The piece became a small attraction for visitors to the area, but was uninstalled at night. “We do not know how it got here and it seems that it has already disappeared,” said the administrative chief of the Californian town.