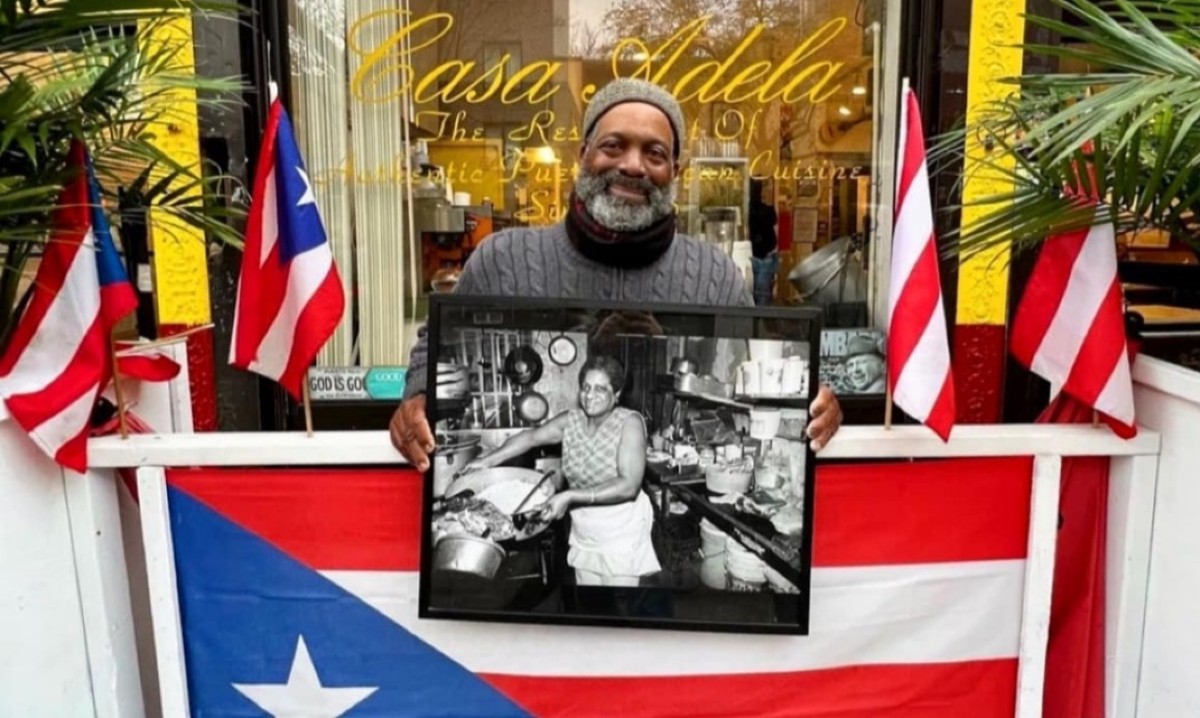 NEW YORK – José “Pepe” Flores’s voice breaks when he thinks about the possibility that the Casa Adela restaurant, a space that welcomed him on the Lower East Side (LES) in Manhattan when he emigrated from Puerto Rico in the decade of the 70, become part of the told history of that neighborhood.

“Hey, I don’t want to think about that … don’t make me cry,” says the Puerto Rican to questions from El Diario while recalling the times when LES was a workplace in industries such as textile factories and hotel services.

“Just thinking about it makes me nostalgic,” adds the interviewee who came to work part-time in the Puerto Rican food space opened in 1973 by the Afro-Caribbean Adela Fargas, nicknamed the “Godmother of Loisaida”.

“I hope that (the restaurant) has many years ahead of it,” Flores continued.

As if the spirit of the so-called “chef of the town” was still walking around the premises, at 66 Avenida C or Avenida Loisaida, more than four decades after its founding and about four years after Adela’s death, the activist treasures the moments in which his also friend, pleased him and other diners with Puerto Rican snacks such as pork feet with Pitipua and rice with bacon.

Arriving at the restaurant was like arriving at his own house, compares the islander.

“You You felt that you were arriving, not at the restaurant, but at Adela’s house‘. There she was after the hustle and bustle of the day. It started at 5 am, ”recalls Flores, who also owns a collection of more than 10,000 vinyl records of Puerto Rican music that includes boleros to pieces by salsa masters such as Maelo and El Gran Combo.

The sense of community that was created in the space was also noticeable in Fargas’ treatment of the underprivileged in the social organization chart.

“I saw a homeless person outside, and she made him a little food, rice and beans, and said, ‘Take that to that person,'” said Flores, who last weekend opened the “Sala de Pepe ”, a space for social and cultural debate that will house the music files that it has collected for more than 50 years.

To date, Casa Adela is also a space for debate and activism of the diaspora in New York on issues that concern Puerto Ricans, not only in the Big Apple but also on the island.

In this sense, Flores recalled a recent demonstration against the Fiscal Control Board, the federal body that manages the island’s finances as a result of the Promise Law approved in the United States Congress, which ended at the rate of a bomb abroad. of the establishment.

“Adela brought together people to talk about the issue of the Board, the precarious situation facing Puerto Rico at this time economically,” he said.

“I know of people, of community activists who, if they have a meeting, ‘well we go to Casa Adela and have lunch to discuss community issues,'” said Flores, who also described the place as the epicenter of art with visits from stars of the stature of Rosario Dawson, John Leguizamo, Luis Guzmán and the poet Miguel Algarín.

However, the 750-square-foot space for activism, solidarity and cultural exchange in Loisaida is jeopardized by the intention of the building managers to increase the rent from $ 1,350 to about $ 6,750 after the contract expired about three years ago.

The above would imply a 480% rent increase under which it would be impossible to keep the restaurant operating.

Paradoxically, being under the management of a HDFC cooperative the commercial rent increase is supposed to be an affordable one. HDFC cooperatives benefit from reduced property taxes in exchange for following income and resale restrictions.

Currently, there are more than 1,100 HDFC cooperatives in New York.

These cooperatives are managed by a Board of Directors who are required by law to act in the interests of the HDFC and its shareholders.

Being in the process of negotiation, Rivera preferred not to comment when contacted by this newspaper.

But El Diario learned that Democratic politicians like District 12 councilor Carlina Rivera as well as District 74 Assemblyman Harvey Epstein are trying to broaden the bridge to a fair negotiation.

This Saturday, Adela’s relatives and members of the community held a demonstration in front of the building to make a formal call to “save Casa Adela.”

They call it “ridiculous” rent increase by 480%

Abigaíl Rivera, daughter of Adela, highlighted the community contribution of his mother through the restaurant over the years.

“I think things are won. Adela has been here for 40 years when this community hardly wanted to arrive because of how bad it was here, and Adela always stayed. Adela, when there were problems, like Hurricane Sandy, the big blackout, Adela was here giving food to the community. If you had the money, you paid. If you didn’t have it, ‘come later and pay me.’ That was Adela, ”said the daughter.

“Here we saw many little children grow up who are now professional men and women, and we have served, we have given,” added the spokeswoman.

Rivera warned that if the negotiation does not come to fruition, LES would be left without the only distinctly Puerto Rican restaurant.

“We understand that the community is changing, that there are many changes, but what we do not understand is why restaurants that we are the only Puerto Rican restaurant here for many years … want to make a ridiculous increase, where we do not sell liquor, we sell rice, beans and pernil ”, he explained to highlight how“ redevelopment ”(gentrification) is affecting Casa Adela.

“We cannot make increases, because we know that we are a community that we are not rich and that we are going through a crisis. I personally see this situation as one to make us leave here. In other words, ‘go away,’ ”argued the Puerto Rican.

Rivera anticipated that the decision will ultimately be made by a judge if the parties do not reach an agreement.

The basic problem that causes the closure of restaurants and other commercial spaces in New York City is that, currently, there is no law that imposes limits on the increase in rents.

The Problem of Lack of Commercial Income Regulation in New York

“The regulation of rent was important before COVID -19 and now it is much more important for a fair recovery,” the politician said as quoted by The City last September.

“As we get out of the pandemic – we will get out – we don’t want to go back to the times where rents could increase by 100% or 300% when the contract expires, “said the councilor.