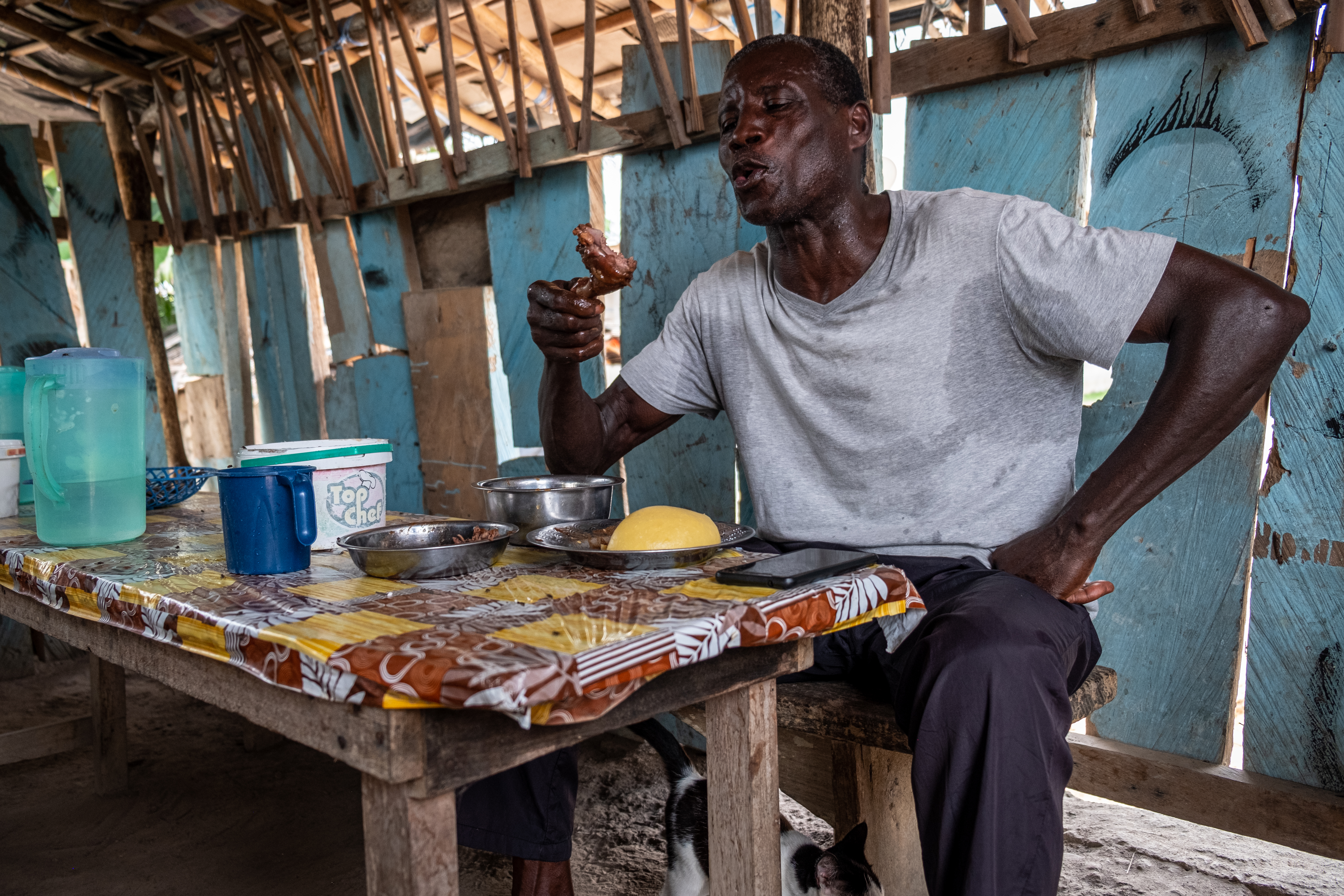 Ahmed Fofana, 21, is out of work and his grandfather’s old shotgun could come in handy. The weapon has spent years disassembled in the shed. “It hadn’t been used for a while,” says Fofana, who has dedicated his time to giving it a second opportunity. Today, the barrel and wooden butt are held together with black masking tape and solder.

Now, almost every day, the young man leaves his village at dusk with the gun on his shoulder. Agou, a hamlet in the Adzopé department in southeastern Ivory Coast, is surrounded by forests and fields that are perfect for hunting. In the wild expanses, Fofana hunts for his table. “Gazelle, deer, hedgehog, rat, pangolin, snakes…,” he explains. If it is edible, he shoots. He would prefer to earn a living doing something else but says that he has little choice. Due to the coronavirus pandemic, he lost his job as a motorbike taxi driver last year. “I am the man of the house and it is my duty to provide for my family.”

Hunting has been banned in Ivory Coast since 1974, explains historian Anicet Zran of the Université Alassane Ouattara, but “that law has never been enforced.” Zran specializes in the history of healthcare and is currently investigating a novelty that is affecting many of his compatriots: the prohibition of eating wild animals – bushmeat as it is known in Ivory Coast.

The reason for the ban is also a result of Covid-19, due to concerns that the consumption of bushmeat could spread the virus. During the Ebola outbreak of 2014-16, a bushmeat ban was also imposed. The origin of that outbreak, which was first reported in southeastern Guinea, was attributed to a bat colony. In the case of the ongoing coronavirus pandemic, scientists suspect wild animals – most likely bats again – were the original hosts before it made the jump to humans. Researchers have also linked the novel coronavirus to pangolins after the mammals were identified as possible carriers and spreaders. A World Health Organization (WHO) investigation into the origins of SARS-CoV-2 is ongoing.

In spite of health concerns, in Ivory Coast the sale and consumption of bushmeat continues unchecked says Zran: “The illegal trade routes set up during the Ebola outbreak are being used again.” In Agou, the bushmeat ban has scarcely registered. On the daily menu at Crinsh-Crinsh diners are offered rat with cassava in eggplant sauce. Emile Yapo, 60, takes a nibble of leg. “Delicious,” he exclaims, although he recognizes the need for caution. “If wild animals are sick, we are in the dark. They have not been examined by a veterinarian. It could be dangerous.”

However, like his compatriot Fofana, the youthful hunter, Yapo says that there are few alternatives. “Sometimes it is the only thing we have to eat. We don’t have any other choice.” While in the majority of Ivory Coast’s major cities bushmeat is a delicacy that costs more than chicken or beef, in rural areas where it is an important source of protein, the opposite is true.

“There isn’t a lot of food here,” says Sylvie Demoué, who owns Crinsh-Crinsh, while she mashes cassava roots with a huge wooden spoon. “Fish is too expensive, so they go out into the forest and I cook what they bring back.”

Not everybody in Ivory Coast eats wild animals, Zran stresses. On the coasts, fish is the main source of food and due to their religious beliefs, Muslims avoid any kind of bushmeat. But for a majority of Ivorians, bushmeat is not only necessary to survive but also a custom with significant cultural value. “When families get together it is the traditional dish. It is impossible to ban it,” says Zran.

Devastating effects on the natural world

Marcelline Bah, president of the local branch of non-profit Friends of Nature (Friends of Nature), educates her compatriots in Agou about the possible dangers associated with bushmeat, not just potential healthcare risks to humans but also the catastrophic effect on the natural world. “You see fewer animals these days. We have wiped out many of them. You hardly see pangolins any more, there are very few left,” she says.

According to the World Wide Fund for Nature (WWF), over the past 50 years, the number of wild animals on the African continent has been reduced by 65%. In large part, says the WWF, this is due to “human activity.” When she passes by a restaurant or comes across a hunter, Bah attempts to change their mindset about bushmeat. “But if we ask them to kill fewer animals they ask what they will get in return, and they get angry.”

Furthermore, the hunted animals are not solely for local consumption but are also sold further afield. A few kilometers from Agou, along an asphalt highway that connects southeastern Ivory Coast with the coastal city of Abidjan, an army of hunters sell their catches of the day. When a car slows down on the periphery, there is a charge toward the vehicle with snakes and rodents clasped in hands.

Although they are increasingly scarce in Ivory Coast, pangolins are also on offer. When the vendors realize they are talking to a journalist though, the dead animal disappears into a refrigerator. “You hardly ever see them anymore,” says Bah sadly. “But they are still served in some rural restaurants. A dish of pangolin is more expensive than one of any other bushmeat.”

As is the case in the rest of the world, demand for pangolins in Ivory Coast is high. According to the WWF, over the past decade, more than a million pangolins have been illegally trafficked. The magazine National Geographic has described the pangolin as the most-trafficked mammal in the world and the species has been on the endangered list for some time.

“Since 2000, the number of pangolins being poached has risen exponentially,” says Claire Okell, director of The Pangolin Project, which is dedicated to preserving the species. “All of the four species on the African continent are in danger of extinction. The survival of the four species in Asia hangs by a thread. This century, due to the diminishing numbers of Asian pangolins, the poaching crisis has extended to Africa and now threatens the survival of those that remain on the continent.”

While people in Ivory Coast and elsewhere eat pangolin meat, the animal’s distinctive scales are exported, mostly to China, where they fetch considerable sums in the traditional medicine trade.

China and Ivory Coast have recently been adopting measures to combat the trafficking of pangolins. Last year, three tons of seized pangolin scales were incinerated in Ivory Coast, a symbolic warning to poachers and traffickers. In China, pangolin scales have been removed from the list of ingredients authorized for use in traditional medicine.

These are important steps, says Okell. “The time has come to make sure that we are acting in accordance with the measures and policies laid out by governments. And to do that is necessary to take all sides into account. One of the main obstacles the protection of this animal faces is the lack of awareness of judges, police, ecologists and communities about the species and the laws that protect it.”

According to Zran, the fact that Ivorians are partly responsible for the disappearance of the pangolin is difficult to overcome: “The principal cause is that people continue to hunt them for their own consumption. We eat too many of them.”

While stalking the forests around Agou, Fofana suddenly freezes. The sound of a twig snapping is audible in the distance. The hunter suspects it is a deer, but so much the better if it is a pangolin. He won’t even have to use his grandfather’s shotgun to bag it because when threatened, the pangolin curls itself into a ball. “You just have to pick it up,” he says.

As he glances out from among the bushes, Fofana silently drops to one knee, pinching his nose with his thumb and forefinger. A loud nasal call resonates through the forest. At the other side of the clearing, everything remains silent. Fofana creeps closer, but swiftly discovers that whatever animal was there is now long gone. Maybe he’ll have better luck tomorrow.