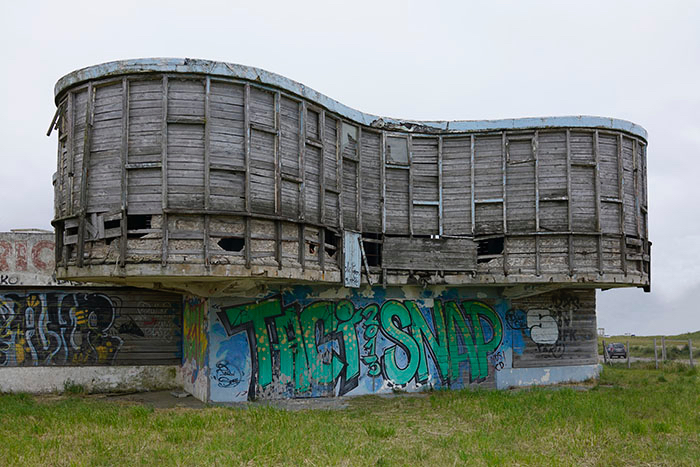 Next to the cliffs of Mar del Plata, on the most touristic coast of the Argentine Atlantic there is a building in ruins. It is ramshackle and, amidst dirt, neglect and poorly made graffiti, one guesses a name: “Parrilla Perico”. It’s not a grill, it’s not a restaurant, and actually now it’s almost nothing, but at the time it was a cloverleaf of concrete and sinuous glass facades and fancy cocktails on the seashore. A masterpiece with capital letters of modern architecture that was built on that side of the second world, as the great Quino said in the mouths of his characters. A building the son of a Hungarian architect who fled from the Nazis and an Argentine student who was as in love with the work of his teacher as with his wife.

The Hungarian architect’s name was Marcel Lajos Breuer and, although he was born and raised in Pécs (one of the five largest cities in Hungary), at the age of 18 he moved to the German city of Weimar to study at a design school and architecture that was called to revolutionize the world: the Staatliches Bauhaus. Indeed, the Bauhaus. There he was a student of Walter Gropius, the father of modern architecture.

After finishing his studies and spending a short time in Paris, Breuer returned to Germany where he began to be recognized as an industrial designer. From those twenties and early thirties of the last century are the famous Cesca chairs Y Wassily that we have all seen at some point without knowing that their names were Cesca and Wassily or that their author was called Marcel Breuer or that they were almost a hundred years old. First, because it seems incredible that such a modern design is almost a century old: a stainless steel tube that bends over itself in a single gesture, forming the structure of the chair, on which the rattan or leather inserts that form are placed. the backrest and the seat. Second, because industrial designers are not usually famous people for those who are not amateurs (or professionals) of design. And third, and perhaps more relevant, because Marcel Breuer was never considered one of the greats. Even though so much Le Corbusier What Mies van der Rohe They recognized the talent of an architect who was over fifteen years old, they never saw him as an equal. Only the aforementioned Walter Gropius firmly believed in Breuer, to the point that, in addition to being a teacher, he became his mentor.

In fact, it was the advice of Gropius himself that convinced Breuer to leave Germany after Hitler came to power. It was the best decision he could make, not only (and obviously) for his physical integrity, since he was Jewish, but also for his professional future.

After returning to Hungary in 1935 and moving to London in 1936, Breuer emigrated permanently to Cambridge, Massachusetts, in 1937. There he began to teach at the Harvard Graduate School of Design and met a very brilliant Argentine student named Eduardo Catalano.

Catalano, born in Buenos Aires, studied at Harvard because he was the son of a wealthy family but also because he was very bright. So much so that, shortly after finishing his degree in 1945, he began to build notable works in both Argentina and the United States. Among the latter would be the Eastgate tower at MIT or his own house, the Catalano house, a very delicate jewel of warped concrete erected in Raleigh, North Carolina, in 1955.

Among the buildings built in Argentina, Catalano also found a gem. But this time the jewel was not his, or at least not entirely. The creator was Marcel Breuer, his teacher and teacher.

We are in 1946, times of the First Cabinet of Juan Domingo Perón, when he was still taking pictures with his hair ungummed, smiling next to an even more smiling Evita. Times in which the Argentine Nation fought to get its head out of the second world.

One of the processes undertaken by any country that wants to advance rapidly within the global capitalist society is the development of tourism. Fast growth, fast earnings, fast currencies. However, over time betting everything on the tourism card is an almost certain way of losing your shirt at the casino. But in the middle of the 20th century there was no one who could (or wanted) to foresee it. For this reason, the Perón government considered that one of its tourist consolidation objectives would be to give prestige to the city of Mar del Plata and, specifically, the south coast, which was still essentially undeveloped.

To attract such prestige, la FADU (Faculty of Architecture, Design and Urbanism) of Buenos Aires commissioned the recent graduate Eduardo Catalano to convince Marcel Breuer to design a building next to the cliffs of Playa Serena. In one of the lots in which the entire southern coastal area had been compartmentalized.

Rather than being disappointed by the fact that the FADU decided to enlist the services of a foreign architect rather than its own, Catalano convinced Breuer to carry out the commission. Possibly because he knew that one of the ways a second world country has to gain prestige is to trust the talent of the supposed first world. Breuer seemed to see it clearly when the Argentine told him that the building should be an icon of modern architecture and that there should be none like it in the world. The Hungarian accepted the commission and projected a floating concrete double clover surrounded by waves of glass and wood like it did not exist anywhere else. Breuer, who the great masters had never considered his height, anticipated modernity itself.

The works of the Parador Ariston began in 1947 and lasted for more than a year. To the point that Eduardo Catalano, who had just gotten married, decided to drag his wife to spend the honeymoon in Mar del Plata so that he could go frequently to visit them. Well, although the project belonged to Breuer, supervision was always the responsibility of the Buenos Aires native.

The somewhat rudimentary masonry of the time faced forms and demands such as it had never had to undertake: workers standing on tiptoe on a concrete slab that, in turn, stood on tiptoe on pillars to look out over the Atlantic.

Once completed, the Parador Ariston, in addition to being a jewel of world architecture, served as a dance hall, cocktail bar and bar for the elite of the time, and perhaps its name came from that semi-aristocratic attitude. However, after a couple of decades of splendor, starting in the seventies, the Ariston began to fall out of favor. Little by little, its successive owners and tenants were destroying parts and adding others without any respect or modesty.

The problem was not that the Ariston stopped being elitist, the problem is that it was not respected. This is how the Maryana nightclub became and, at the time of the surfing splendor of the early eighties, it was the Bruma y Arena café-bar. But of course, the Ariston was on the cliff and had no direct access to the beach, so, not being too good for surfers, the Mist and Sand didn’t work either.

At the end of the eighties, the Parador Ariston became the Parrilla Perico, a sign that can still be seen in the painting of the façade. And then it was nothing. Abandoned since 1993, the Parador Ariston lives a slow death from which only the individual efforts of a few lovers of this building seem to separate it. Efforts that, at least, got it declared a National Monument in 2019. Perhaps it is too late and perhaps a declaration without express financial support is not enough, but it is a way for the world to discover this jewel designed by a Hungarian goldsmith that is hidden in a cliff in the south of Mar del Plata.

* Pedro Torrijos is an architect and in May he will publish his first book, ‘Improbable Territories’, where he talks about this and other curious stories related to architectural jewels.