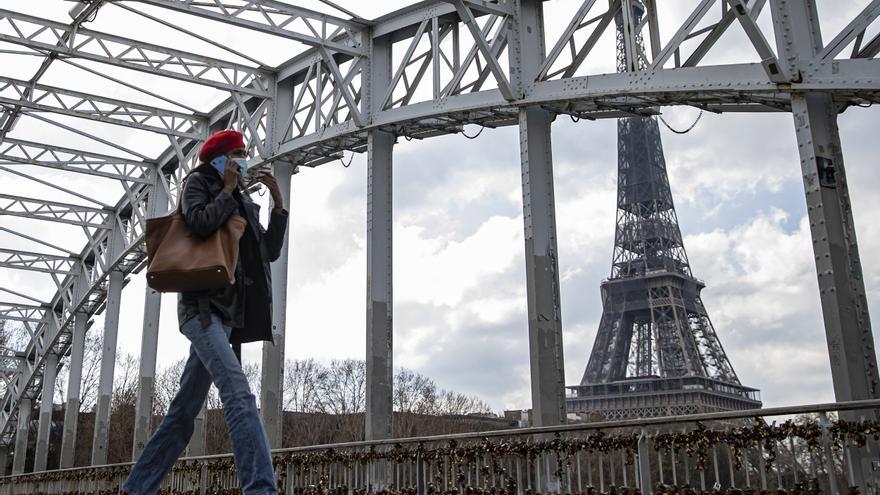 Paris and a third of France are preparing this Friday for their third confinement in one year, which will start on the weekend, will last at least a month and, although it will limit movements, will be lighter than those of March and November.

Sixteen departments of the country, where 21 million of its nearly 70 million citizens reside, will face restrictions with which the Executive hopes to stop the pandemic at a time when the average number of infections is close to 25,000 a day and the incidence rate in the last seven days reaches 266 cases per 100,000 inhabitants.

Until now there was a curfew throughout France from six in the afternoon to six in the morning, which in regions such as Nice and Dunkirk, in the south and in the north, was completed with a weekend lockdown. As of this Saturday, in those two departments and in another 14 a lockdown will be imposed all week, and both in them and in the rest of the country the start of the curfew is delayed at seven.

You can leave home with a receipt at a maximum distance of 10 kilometers and without a time limit, the schools will remain open and also the shops of first necessity, a category that includes bookstores, record stores or DIY stores. According to what the government spokesman, Gabriel Attal, said today, also the hairdressers.

Abdel, 53, is one of those who this Friday will lower the blind. The tailor owns a small clothing store in Paris, and maintains that the small business is “exhausted.” Although he assures EFE that State aid received is not enough, does not lower his arms: “We are forced to fight: we are artisans, we love what we do … We try to be optimistic. Perhaps one day the sky will be blue again, people will be fine, health will return …”.

The same concern is shared by the co-founder of the Ici bookstore, Anne-Laure Vial, although this time she can keep her store open. “I don’t know anything about what the future will be like or whether a lot of people will come or not. What I know is that it will be better than if we were closed or if we had to live only from ‘click and collect'”, he says about that system that in the past authorized the sale by internet and the collection in store.

Though the external borders within the EU are still open, in the affected areas you will not be able to travel to other regions from France, which has caused the rail reserves to go before this Saturday towards the coasts of Brittany or the southwest, for example, have been exhausted, and that the traffic jams to leave Paris tripled this Friday.

Bars, restaurants and cultural and leisure venues such as museums and cinemas remain closedTherefore, the streets remain the main meeting point for the French.

The president, Emmanuel Macron, had resisted the lockdown in the capital region until the last moment and had asked his ministers for a tailored formula that limited the impact, but the situation had become unsustainable, with an incidence rate on Thursday of 446.1 cases.

There are, however, those who would have preferred a total confinement like last year. Benoît, an 18-year-old biology student, believes that what was decided now “does not change the situation much” and it will not be enough to stop the spread of the virus.

This softer confinement will cost the national economy 0.2% of its annual gross domestic product and will entail a total cost of 7.2 billion euros. in a month for the public coffers, among various types of aid to companies and workers.

The Executive does not base its entire strategy on restrictions. After suspending the application of AstraZeneca vaccines this week pending the opinion of the European Medicines Agency (EMA), as soon as it defended this Thursday that it is still “safe and effective” it added it again to its vaccination campaign.

To set an example, Prime Minister Jean Castex, 55, was vaccinated this Friday with a dose of AstraZeneca. However, the French High Health Authority recommended that, while all doubts about the risk of thrombosis are cleared up, it be administered only to those over 55.

France also applies those of Moderna and Pfizer and since the end of December some 5.7 million French people have received one dose and about 2.4 million have completed the cycle of two. The country hopes to have vaccinated two-thirds by mid-June of its adult population. And the merchants want the strategy to work this time: “I hope, like everyone else, that people respect the measures. This is the third time we have closed,” concludes Simon Cohen, who will temporarily lock his goods store this afternoon. about the American singer Michael Jackson.