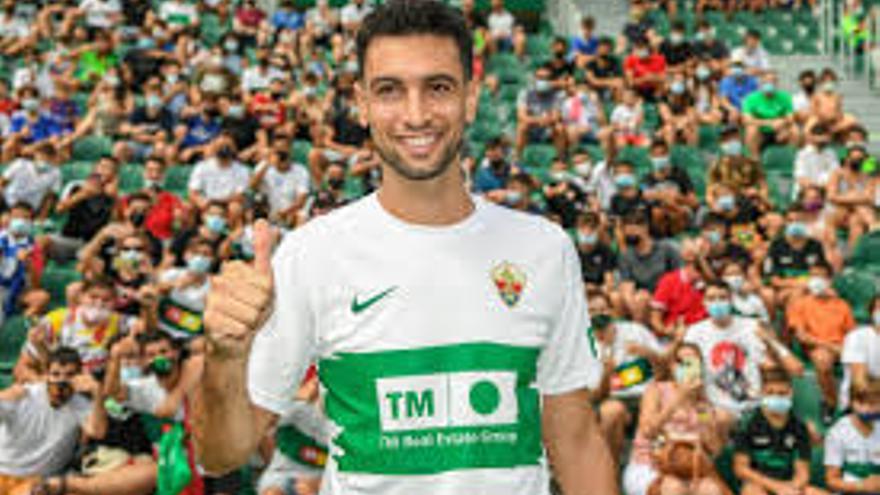 Every time I am feeling better. I’m having minutes and playing allows me to improve. I’m training at the same pace as my teammates and the pace is given by the competition. It’s next month, after the break, I’m sure I’m going to be better.

What is missing to be at the top?

I’m not 100% yet. I had not competed for a long time and from the first game I played to the last I have noticed a great change. Now I have more confidence to dribble, drive the ball and reach the opponent’s area. That gives you the confidence, the physical tone and I’m sure that soon I will be much better.

What has happened to the team in the last three games to add just one point out of nine?

We have lost the last games due to concentration errors. We conceded goals at the beginning of the second half, when we had the matches under control and that cost us points. We have to improve that aspect. We have talked about it during the week and we have to improve.

Is there concern inside the locker room?

The group is doing well, eager and, of course, there is concern, because we have made mistakes that have cost us goals and points. That desire we have should help us to improve those details, because we have a team to play much better.

He is going to play for the first time against Real Madrid in Spain. Were they the games you wanted to play when you signed for Elche?

They are beautiful games that you like to play. I had to face Real Madrid many times in the Champions League and it will be the first time with Elche and I hope, if the coach decides that I should play, I can help the team.

How can they be hurt: by going to pressure them up or waiting behind well sheltered in defense?

They are teams that when you press them up you have a better chance of stealing the ball and scoring goals. In addition, when we are further away from our goal, we will avoid making mistakes and having them mark us. In the last home game (Espanyol) we showed that we can handle the games and that is the way.

What can be the key to the match?

Real Madrid have very important players with a lot of quality. We can’t give you a meter. We must be very vigilant in defense. It is a team that usually gives you the ball to steal it and go against it. It is the style of Ancelotti. For this reason, we must be very focused so as not to lose balls and that they do not generate counterattacks.

Did you expect a league as even as the Spanish one?

I expected a League as even as it is being. It is getting harder and harder to win and there are many teams with the same points at the top of the table. The same happens in Spain as in other places. We see in Italy how Juventus almost always won and now there are other teams with possibilities. Big teams have more possibilities, because they can make more changes, but those of us who are in the middle of the table down can also surprise them.

Has the chip already changed from going from big teams like Paris Saint Germain or Roma, which are fighting to win titles, to being at Elche whose goal is permanence?

The chip for a footballer is always the same. Go out and do my best and help the team. I am aware that I am not in a team like the ones I have been before (Paris Saint Germain and Rome) and the desire is the same, although, logically, the objectives are not the same. Here the goal is permanence and we will do everything to achieve it.

Does Elche have a team to be higher or in the dressing room are they resigned that this is what there is?

We are convinced that we have the equipment to be much higher. The coach makes changes from player to player and anyone can start. That is good for the technician. Perhaps, by making so many changes, we do not find continuity in the way we play, but we have come many new players and the coach has to carry out tests.

How can the situation be rectified?

We have to start adding. We have a quality squad to have the ball and you take risks on certain occasions, because that is the way to be closer to winning.

Have the latest defeats come because you haven’t finished finding a way to play?

The coach has planned the games well, because then what he told us during the week happened, but then we are the players who have to give more. In the last games, in many moments, we have been better than the rival, but then we have made mistakes that have punished us. Seeing the team we have, we must give something more. Get together and combine more, reach the opposite goal more and not lock ourselves in when we get ahead.

What is the position in which you think you can perform the best?

I cannot say what is the ideal position in which I would like to play, because I am one of them, it would not be good for the team or for me, because it is the coach who must decide. The coach needs me to enter from the left and it is a very good position for me. I have to adapt a little more and when I am physically better I will be able to help more in the retreat, because, now, it is still difficult for me to help the left back. The coach also gives me freedom for when we have the ball to move around the field, that complicates my brand to the defenders.

Until the Espanyol game, which was a starter for the first time, it has always touched you as a shock and all eyes have been on you to solve the games. How have you handled it?

Yes, I have almost always come in at a disadvantage on the scoreboard and it is normal that I seek to get in contact with the ball to give passes to the forwards and help