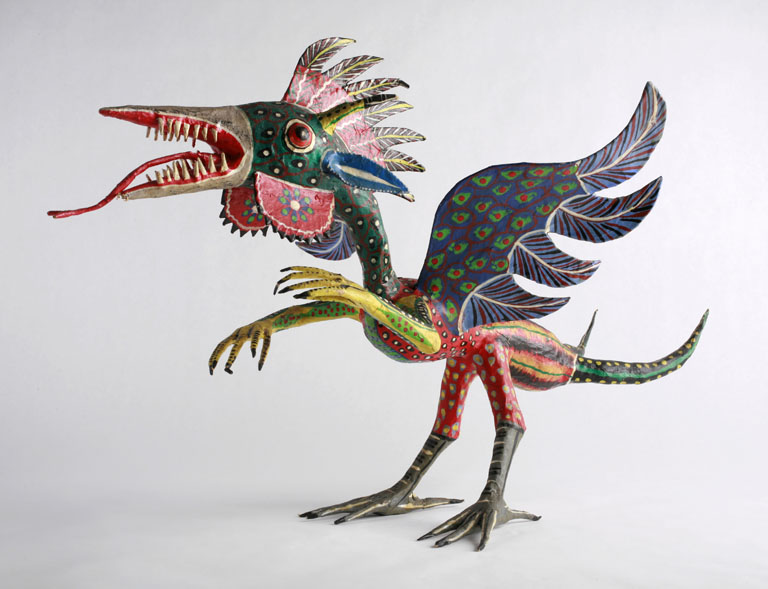 The power of imagination and dreams marked and changed the life of Pedro Linares Lopez, who always dedicated himself to the trade of cardboard worker who lived at home. His grandparents and father masterfully made cardboard figures that they later sold. Pedro learned, since he was a child, to treat cardboard as a noble sculpture material to make piñatas and the traditional catrinas, the skulls with which the Day of the Dead is celebrated in Mexico.

His life took a turn at the age of 30, when a serious illness put him in bed, unconscious, with a high fever and without having the financial means to know the diagnosis or its treatment. Cared for by his sisters, who could only pray for him and treat him with cold cloths to lower his fever, young Pedro Linares was so close to death that when his relatives woke up they said that he did it in the middle of the wake and considered it a miracle.

From that moment on, the lucid memory of the dreams that he had in the midst of his feverish state and on the verge of death, changed his life. All his effort and work was dedicated to recreating the fantastic animals that he dreamed of and that he remembered so clearly. This is how the word “alebrijes” arose, nonexistent until then, and that was what the animals sang in unison in their dream state.

Little by little he was perfecting this mix between reptiles, winged mammals, birds and insects, and giving them color until they became appreciated creations that gave him international fame. Alebrijes became known throughout the world and one more representative sample of Mexican art, which continued thanks to his children when Linares passed away at the age of 85.

Pedro Linares López was born in Mexico City on this day, June 29, 115 years ago, in 1906. Dedicated since he was a child to his father’s trade, cardboard, the humble life of his family passed smoothly until the illness that He suffered in 1945, at the age of 30, it changed his life. The economic situation prevented him from treating his ailments in time, and the young craftsman was left bedridden, unconscious and with a high fever that made his family fear the worst.

When Pedro was unconscious, he had a very strange dream, but it became the story that changed his life when he remembered it, told it and reflected it in his creations, which allowed him to begin to be recognized in Mexico, then throughout America, more late Europe and, today, around the world.

The strange dream, according to the story of Pedro Linares himself once he regained consciousness, placed him in a kind of forest due to the wide presence of trees, rocks and also the sounds of animals. He felt peaceful and painless walking through that kind of forest. However, suddenly the whole scene changed and he began to turn into strange creatures that he had never seen before and that he was unable to recognize or classify.

Among those strange animals he saw, the ones he remembered the most later were a donkey with wings, a rooster with bull’s horns and a large number of animals mixed with insects, reptiles, birds and mammals with all kinds of colors.

However, something else caught Pedro’s attention in that dream in addition to the appearance of the strange animals, and it was the fact that they were shouting the word “alebrijes” without stopping in a clear, loud and repetitive way, singing all at the same time. “Alebrijes, alebrijes, alebrijes!”

Pedro Linares recalled that his strange dream continued with his journey along a path full of stones in which he recognized a human figure and asked the way to leave that place. It was then that that unexpected interlocutor told him that he was not in the right place and that he had to get out of there as soon as possible because his time had not yet come.

The human figure indicated the direction to exit, and Pedro Linares began to run as fast as he could to end up passing through a kind of small window.

The relatives of Pedro Linares later said that when he regained consciousness and woke up, he was in his own wake, surrounded by family, friends and neighbors who were mourning his death and who considered it a miracle.

When Linares recovered from the illness, he began to remember this strange episode that he had had in his dreams while he was torn between life and death. It was at that moment when he made the decision to give life to the creatures of that forest, so, taking advantage of his cardboard skills, he began with the task of representing those strange animals that he had seen in such a real way in dreams.

He made countless sketches and brought them to life through painting until he had the exact representations of what he saw. The last step, that of naming all those creatures, was not complicated either, since he called them alebrijes. His life, from that moment on, consisted of showing his new side of working with cardboard to as many people as he could. First, to his loved ones and close ones, but little by little, the admiration he aroused extended that scope to the entire country and, later, it spread throughout the planet.

Such was the recognition that Pedro Linares obtained with his alebrijes, that he was invited on numerous occasions to visit the United States and Europe, with the sole purpose of showing the world his beautiful and strange creatures. He attracted the attention and admiration of the most internationally recognized Mexican artists, such as Frida Kahlo and Diego Rivera, but it was a documentary about his life and work, made in 1975 by the filmmaker Judith Bronowski, which raised him to fame. world.

In 1990 Linares received the National Prize of Sciences and Art of Mexico in the category of Popular Art and Traditions thanks to all his work, his technique, his art and, of course, his alebrijes.

Pedro Linares López passed away on January 25, 1992, at the age of 85, leaving an incalculable heritage in Mexican art. His trade passed to his children, who continued to evolve and create new alebrijes.

Linares was, without a doubt, an artist who allowed a new perspective to be consolidated on the art for which Mexico is recognized today; an art full of mysticism, magic, color and an unsurpassed imagination. He is considered the father of a type of surreal art based on non-existent creatures that were only connected to each other by their own imagination and the power of their dreams.

He knew how to bring this art closer and turn it into everyday life and, today, many artisans and families reproduce the technique and creations of Pedro Linares, helping to turn his alebrijes into immortal ones.