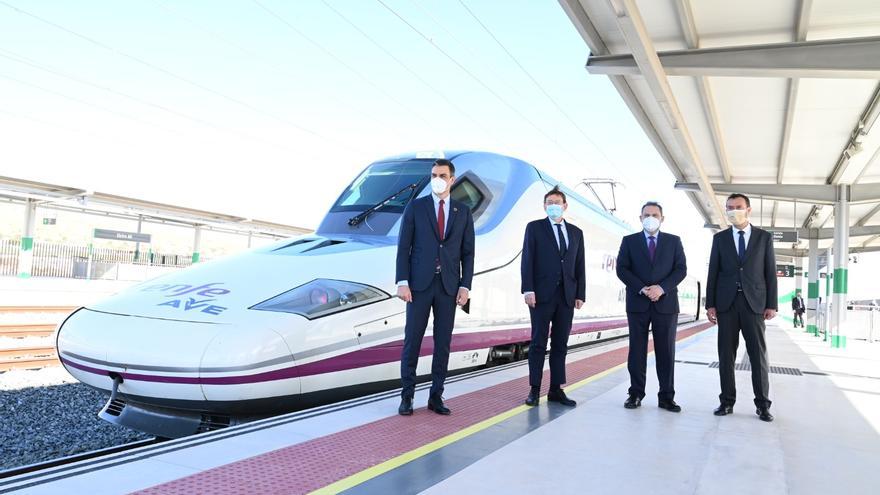 The President of the Government, Pedro Sánchez, has announced that the high speed line that joins from today Elche and Orihuela with Madrid starts with a frequency of two daily services per direction, but later an increase of one more frequency per direction is planned and in the final scenario four frequencies per direction are foreseen. “The inauguration of this section implies a greater connection, greater accessibility and greater time optimization. And to this we must also add a greater supply of the railway sector, “said the chief executive.

Sánchez made these statements during the official act of the inauguration of the line, in the new station of Elche, where he was accompanied by the President of the Generalitat, Ximo Puig, the Minister of Transport, Mobility and Urban Agenda, Jose Luis Ábalos, and the mayor of Elche, Carlos González, among other participants such as the presidents of ADIF and RENFE. The socialist has defended that the current difficulties due to the coronavirus pandemic have not delayed “those projects that we thought were urgent before the health emergency. Quite the contrary. What the Government of Spain has done together with the Generalitat Valenciana is speed up those projects and proof of this is that today one of the great wishes of the Community and one of the priorities of the Government of Spain is materialized “, he said.

The Chief Executive has highlighted that the inauguration of this new section of the AVE supposes “the connection of the AVE from Elche with Madrid, which until now had no direct rail connection; an optimization of travel time, since now the duration will be of little more than two hours to Elche; and the commercialization of integrated tickets and fixed price, giving free to the Orihuela-Murcia-Cartagena section and intermediate stations and expanding the possibilities of citizens “.

The President of the Government has defended that “the social and territorial cohesion, together with digitization, the ecological transition and real equality between men and women are part of the axes of transformation that will define the recovery plan of the Government of Spain. “And on territorial cohesion he has clarified that this project” will contribute to strengthen the region’s economy, but also that of Spain as a whole in sectors as important as the tourism, industry, agriculture or logistics“.

The chief executive officer has said that the Government’s vision in the railway field is ” break with the preponderance of the radial scheme and promote the development of network corridors to improve synergies between different modes of transport. “” In this vision of the future, the Mediterranean Corridor is the backbone. Furthermore, it must be taken into account that it is an unbeatable opportunity to favor the transport of goods, which has always been one of our pending issues, from our ports and logistics centers, “he said.

Puig, Sánchez and Ábalos during the journey by AVE. information

Likewise, Sánchez has explained that within the framework of the General State Budgets, more than 490 million euros for actions in the Valencian Community, highlighting the more than 225 million euros for adaptation to the international gauge of the Valencia Vandellós section. In the province of Alicante, he continued, the budgeted figure for railway investments exceeds 144 million euros. In total, he said, the accounts this year include almost 2,000 million euros for the Mediterranean Corridor, “double” of what was collected in the 2018 accounts, extended until 2020.

For his part, Minister Ábalos has transferred that it is already executedor 95% of the entire Monforte del Cid-Elche-Orihuela-Murcia line. “We are talking about a network in development whose potential use is triple the current one. The same route that the inhabitants of Elche and Orihuela will now use will be the one that will be used and will connect in the near future the three million citizens of Murcia, Cartagena or Almería to move to Madrid, or Valencia or Barcelona “, said the minister.

“Today we not only inaugurated a high-speed section, today the improvement of transport and Levantine global mobility. Today is the definitive proof that each step we take in the Mediterranean Corridor translates into an improvement in the connections that generates new links between territories that expand as we move forward. An objective that we have been pursuing in the Ministry since we came to the government: the improvement of transport and mobility of all Spaniards, who it is a basic right“Ábalos pronounced during his speech.

The Valencian president, Ximo Puig, has described the arrival of the AVE to the south of the Community as a “historic needle change “ which will help to structure the territory and improve the cohesion of Spain, bringing this territory closer to the desired Mediterranean Corridor. From now on, its inhabitants, but also the businesses of its shoes, his clothes and the fruits of his garden They are a little closer to Madrid and, soon, will be closer to Europe“, has expressed the president.

For Puig, this new section “is more than a fast track to the capital,” because “it is also opens the door to improving commuter services between Alicante, Villena, Elx and Orihuela. “The head of the Consell has asked the Government to continue executing sections of the Mediterranean Corridor and has highlighted the need for” the works, from north to south, to continue advancing, with special emphasis on the Xàtiva-La Encina section “, since that is something that “will allow traveling by AVE between Alicante and València, and from Castellón to Vega Baja”. He has also asked the change of width between Castelló and Tarragona “to connect our goods and citizens to the Corridor”.

During the event, Puig stated the five territorial challenges that the Community faces, which are: “to achieve a cogobernanza effective; overcome the macrocephaly inefficient; agree on a financing fair; serve the Spain invisible and oxygenate Spain depopulated “.

Also the mayor of Elche has taken advantage of the visit of the Prime Minister to ask for “more investment” for his city, number 19 in the country, which also constitutes “one of the economic capitals of the Mediterranean Arc.” Similarly, and taking advantage of Ábalos’ presence, González said that Elche “needs determined investment in infrastructure”, especially to complete the southern round and modernize Cercanías trains that connect with Alicante and Murcia. Also, to connect the referred Cercanías both with the Matola-Elche station of the AVE train as with him Alicante-Elche airport, located in the municipality of Elche.