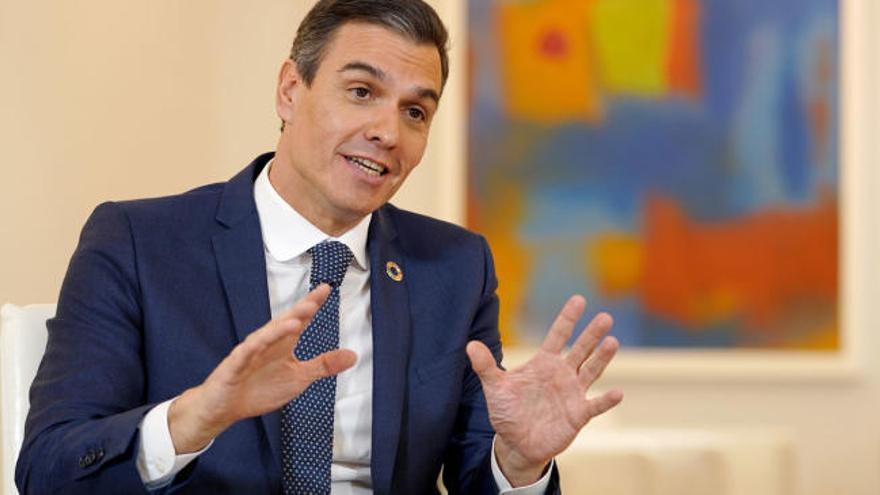 Together with the eradication of the virus, the fight against an unprecedented economic crisis conditions the Pedro Sánchez government’s agenda. Aid to companies in the process of disappearing, European recovery funds and structural reforms are key to recovering growth and employment. The question is how to do it so that it reaches SMEs and the autonomous communities as a whole.

This week, the Bank of Spain said that 10% of companies are in danger. There is a clamor from business organizations asking the Government to make capital transfers and not only guarantee credit. When are companies going to have direct capital injection from the State?

Right now, as you well indicate, what we are doing is guaranteeing the solvency of companies. This is what we are doing with the new ICO lines. And what you are referring to is the HORECA plan (hotels, restaurants and cafeterias), a specific plan for a sector that is competitive, that is very present in our neighborhoods and that needs support. What the Government of Spain is going to do is complement all the actions that are being carried out by both the municipalities and the autonomous communities in defense of these sectors. And we are going to do it as we have done with the tourism sector, and as we have done with many other sectors. But, in general terms, one thing must be said: this pandemic has anticipated the future, it has accelerated many changes that it is essential that we are able to face them with full guarantee and with the necessary resources. That is why what happened last July in Brussels is so important. We have allowed, by borrowing all the countries, to propose a program of restructuring the European economy, and therefore Spanish, unprecedented in the last 40 years. In ecological transition and the use of renewable energies, and the consequences it will have on job creation and territorial cohesion. In digitization, which is not only connecting your computer to the internet, but also incorporating the decision processes of companies in digitization. Spain is ready for it. We have a fiber optic extension that is the sum of Italy, Germany and the United Kingdom. We are prepared because 19% of our GDP is already linked to the digital economy. The European average is below, and even China and the US have a digital economy that represents 22 and 23% of their GDP. In other words, we are also in a position to lead this digital transition.

Do we have everything we need?

What we need is political stability. We need a four-year term for the legislature. We need some new Budgets. We need Budgets for 2020, not for 2018. We have had to work during this pandemic with Budgets carried over from 2018. What is striking is not that there have been ten parliamentary groups that have approved new Budgets for 2021. What It is striking that political parties, supposedly from the government, like those on the right, have ignored the future and coming of their country and have joined the extreme right in boycotting these Budgets. Budgets that have three legs that I think are very important to claim. First, the social shield, the minimum vital income, the ertes, to name two fundamental elements of the social shield. Second, to convey the first 27,000 million euros of this recovery fund. Third, the ecological and digital transitions. We need political stability, we need new Budgets and that is the task of the Government of Spain.

In Valencia, in Asturias, in Galicia, in the Balearic Islands, in the Canary Islands, also in Catalonia, there is fear that the manna from European funds will remain in the large companies based in Madrid and will not reach SMEs or territories … How is the Government going to guarantee that this does not happen?

The challenge is to articulate projects that support the country. For example, the automobile sector, beyond company X or Y, generates projects that support the country. Because the automotive sector is present in a large part of the autonomous communities in our country. Therefore, the risk that the Government has detected and that it has told the autonomous communities is that the projects that have to be carried out linked to those transitions to which it previously referred cannot be local. They have to be the territorial structuring of the whole country, there will also be cross-border projects. For example, when we talk about green hydrogen or lithium and, therefore, batteries, we once again link clean energy with the automotive sector, and we will have to do it with other countries. From the government’s point of view, clearly, the projects to be put in place are not only going to be transformative, but also backbone of the country. There will be framework agreements that we will sign with the autonomous communities to face, for example, part of the urban renewal of certain cities, but there will also be other instruments, through funds, of public-private collaboration mechanisms.

How are they going to do it?

The royal decree that we are making will represent an authentic administrative revolution in order to effectively absorb all these resources. We are going to use classic instruments of public-private collaboration and cooperation between the State and the autonomous communities, but also some new ones, because the challenge that lies ahead is, in six years, to convey effectively, to make that leap in competitiveness , 140,000 million euros. We have a great opportunity, the greatest opportunity to reconvert the economy of our country. They are 140,000 million euros in 6 years, when the structural funds in the 90s of the last century represented 8,000 million euros. And we took a leap of modernity. Therefore, we have a great responsibility with all the major administrations, also with companies and, of course, what we want to bring together the entire business fabric. Not only to the most classic actors, who are also very important in our productive fabric, but also to all that new business class that is emerging in the new sectors.

Will there be specific plans for tourist areas? I am thinking of the Canary Islands or the Balearic Islands, of Barcelona itself or a part of the Valencian Community.

Are there going to be specific plans for tourism? Undoubtedly. Will there be specific plans for certain territories where the tourism sector is clearly the engine of the economy? You are right. The Government of the Balearic Islands or the Government of the Canary Islands have plans that, before the pandemic and before this crisis, were already designing policies related to the ecological transition in the tourism sector. If you go to the Balearic Islands for example, years ago there was talk of the need for an energy transition. There was already talk of the need to reinforce the wiring between the peninsula and the Balearic Islands to guarantee energy security. There was talk of the use of electric vehicles in the Balearic Islands. There was also talk in the Canary Islands about using renewable energies linked, in this case, to the ocean, which are already being designed and which will be put into operation in the coming years. All these changes, these transitions, have been anticipated as a consequence of the pandemic, but they catch us prepared.

How are they going to make it happen?

The Government of Spain approved an integrated national energy and climate plan that was awarded and recognized by the European Commission as the strongest and most solvent of all the member states. We have proposed a framework that guarantees legal certainty for companies and investors when developing clean energy in our country. We are going to pass a new law on Vocational Training. In digitization, as I have said before, we have a fiber optic extension that allows us to address all these digitization challenges with certain guarantees, not only of competitiveness, but also of cohesion and inclusiveness. With this I want to tell you that Spain is prepared to deal with this economic reconversion with great guarantees.

The EU conditions the funds to some structural reforms. Will there be labor reform?

In the framework of labor relations, I believe that the exercise that is being carried out in social dialogue and social peace is very important. As long as the social actors want this labor reform, the Government is willing to accompany it. The Spanish economy during 2020 is going to fall by double digits, that is, we are going to have a sharp drop in economic activity that is going to recover in the coming years. In this context, what is important is to guarantee social peace and, therefore, we are going to bet resolutely and emphatically on dialogue and social agreement, because I think that is what the social actors want.

Access the interview of the Prime Minister with Prensa Ibérica:

First installment: “While at the helm, the Constitution will govern from the first to the last of its articles”

Second installment: “The pandemic attacked those countries that are international hubs for travelers”