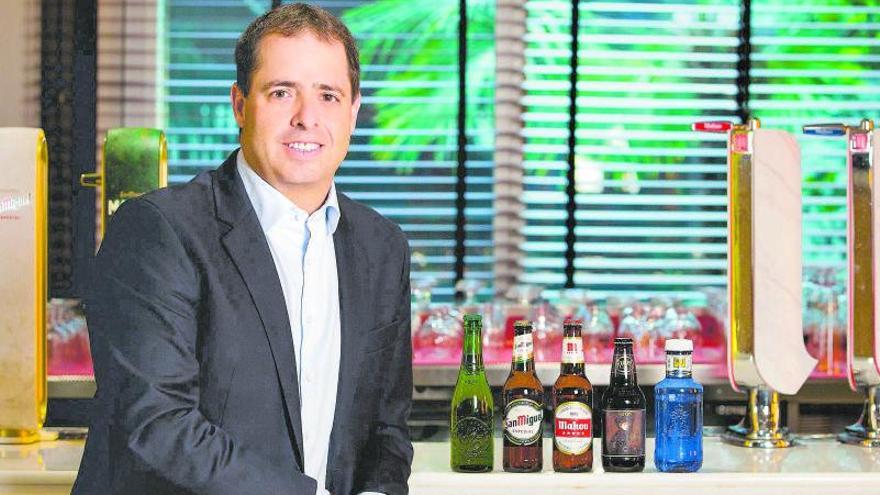 What position does Mahou have in the Spanish beer market?

We are the market leaders with a 32% share in production. We have 130 years of history.

How did the pandemic impact last year?

It impacted in a very high way. 75% of the market was hospitality. The drop in sales was 40%, according to the consulting firm Kantar. Contingency plans are always available in companies, but this was a real bomb for the brewers. In terms of turnover, Mahou cut sales by around 10.5%. We were able to finish the exercise with benefits, but with a 98% drop compared to 2019.

Did the map of beer distribution and production change with the pandemic?

The crisis has affected all producers in a similar way. The little ones have also suffered. The market in food chains grew between 15% and 18%. Meanwhile, in the horeca channel (hotels, bars and restaurants) it fell 40% in general for the sector. That transfer existed but it did not manage to balance the fall we had in the hospitality industry.

And the evolution of this year? Is normalcy returning?

In the first quarter, a situation equivalent to that of 2020 was recorded, with significant drops in sales in the hospitality industry. Now this May we begin to have other types of numbers. Beer consumption in Spain depends largely on foreign tourists, between 20% and 25% of total consumption. Thus, recovery will depend on tourism. There is beginning to be a green sprout in the hospitality industry. There are messages of optimism in the beer sector.

Socialization is in our DNA. Going out, socializing and having a beer are among the habits of normality, as we lived in years ago. 2021 is a year of transition, there is a lot of uncertainty. The speed with which we will reach normalcy will depend on tourism and the vaccination rate is essential. We are all responsible so that the hospitality industry is a safe place for this socialization and the recovery will come between 2022 and 2023. 2021 will be a year of support for the hospitality sector.

There were millionaire aid from Mahou, about 200 million euros, to the hospitality industry due to the pandemic in 2020. Are they maintained this year?

In 2020 we take three basic strategies in the face of the pandemic. The first was to safeguard people, as a critical element in the situation in which they had to live. Second, secure supply. For example, the consumption of cans skyrocketed and we were forced to ensure the arrival of the product to the stores, which was maintained even in the hardest moments of the crisis. Once it was possible to open, even partially, we decided to offer an extraordinary contribution of beer and water, at a market value equivalent to about 75 million euros. We believed that it was a commitment on our part and what the hoteliers needed. The third way was the support to install terraces and stoves, so we contributed to helping to condition some 65,000 points of sale.

And now what is the situation?

We believe that we have to continue with all the transformation that the hotelier needs. The first thing is digitization. We are working with the hoteliers for the development of delivery and home delivery. Or adapt to the use of Google and be in a better position in search engines. Or how to be more efficient with the use of digital tools. Second, we wanted to be a help in terms of sustainability. It is another of the great axes that we have to promote. For example, in parasols. We have a parasol with a material that acts as two trees when it comes to purifying the air. Or the goal that by 2022 all the material used in Mahou’s terraces will be recycled. It is a journey that we defined in March of last year and that has continuity. The commitment to support the hospitality industry is long-term.

What investment do these planned aids represent this year?

In digitization and sustainability we have planned aid of around 40 million euros. Thus we maintain a fairly high investment focus.

Where is the Spanish market going? In distribution, the offer is concentrated in very few brands … And the weight of distribution has increased in the sales of producers.

My feeling is that what you are seeing is an important development of the category. We are not seeing a greater concentration of the market but a development in which the consumer is reacting very positively to new concepts. Before 2019, innovative products accounted for almost 50% of growth. In a way, what we are seeing is that the category is developing. The craft world [marcas independientes] and craft beer are helping a lot in the overall growth of the category.

Which market lines have the best expectations?

Within the beer category, understood as a democratic product, what we see is that the consumer is willing to pay more if you offer them a good product. This is the case of non-alcoholic beers, for example. With our Mahou 0,0 Tostada we have been very successful, since it means reaching non-alcoholic beer as an enjoyment and not as a renunciation. In the Premium category it also happens. The artisan in our own brands have grown, have added value and have developed the category. They have benefited both the customer and beer consumption in general.

The year 2020 has been tough for everyone, but Mahou, for example, has launched ten new products. We have entered new categories such as cider or Glowy hard seltzer [refrescos con alcohol de baja graduación], which we have been the first to launch in Spain. I believe that beer and its environment will recover well and that they will return to the trends that existed in 2019.

Leaders have an important weight, but the market is growing. Those small producers are also growing and the feelings are positive. Those small breweries also add value to the beer culture.

Returning to the four families, they concentrate a good part of the Spanish market, which, moreover, is highly compartmentalized …

The origin is very important in the configuration of the market. In our own brands Mahou dominates in Madrid, Alhambra in Granada, San Miguel in Lleida and in Malaga … Local origin is very important. The Spanish market shows that weight of the local. But at the same time beer travels better now and the consumer is open to trying new concepts, especially if they add value and differentiation.

But as the head of Mahou in Spain, his objective will also be to break those areas of regional dominance …

I think the key is to add value to the consumer and that is how we can develop, not only in Spain but also abroad.

Is the fact that Damm is consumed more in Catalonia, Cruzcampo in Andalusia, Mahou in Madrid and Estrella Galicia in Galicia is just a matter of culture and beer tradition?

Origin is given importance. It has a very important weight. We try to compete by giving value to the brands that the consumer is looking for. It is not about blocking competition.

How are market shares distributed in Spain?

Mahou is the leader, followed by Heineken, Damm, Estrella Galicia … We maintain the leadership with the commitment to make the product category grow. All the firms try to defend the points of sale, and we also want to enlarge the category and introduce new product lines for which the consumer wants to pay a little more.

Is the expansion in Spain or are there more possibilities for growth abroad?

Internationalization is important and accounts for around 22% of sales this year. We are attentive to the market to face any acquisition and, if an opportunity appears, we would take advantage of it. Mahou accounts for 70% of Spanish beer exports.

How are online sales evolving?

They are here to stay. At some points last year, online sales multiplied by six on our web Tiendasolana.com. In addition, we perceive that customers tend to buy more premium products on the web and consume them at home. It is a channel to continue developing and take it into account.