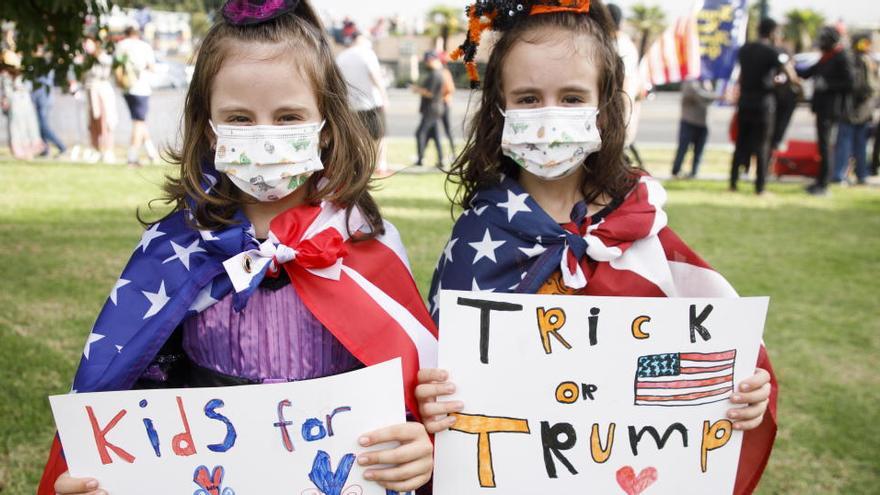 The demographics of the United States change and, at the same time, they break into the list of key states, those that will decide the elections, some that until recently were considered safe territories: Pennsylvania, Michigan and even Texas could abandon the Republicans.

In 2016, then-Republican candidate Donald Trump, won Michigan and Pennsylvania by a narrow margin and thus broke the traditional blue wall (Democrat) installed in the “rust belt” of the Midwest, and thereby obtained the key to the White House.

This year, both states are in dispute again as evidenced by stops amid the frenzied travels of Trump and his Democratic rival, Joe Biden.

Trump will close his campaign this Monday night in Grand Rapids (Michigan), the same place where he ended up in 2016, something some attribute to his superstition; while Biden will do it in Pittsburgh (Pennsylvania), with singer Lady Gaga as a guest star.

Pennsylvania, with its 20 electoral votes, It can be the state where the Presidency is decided.

In 2016, less than 45,000 votes gave the victory to Donald Trump and this year the suburban areas of Philadelphia, Pittsburgh, Scranton or Erie are the key so that Joe Biden, who is dedicating his last 48 hours of campaign to this state, can prevail over the Republican president, something that the polls predict.

Biden closed this Sunday with two acts in Philadelphia, the first of them with Afro-American parishioners and pastors, in an attempt to mobilize the black electorate, traditionally Democratic and that according to the electoral analytics consultancy Catalist has not yet cast the vote by 75%.

The sound of the horns, the equivalent of applause at the Democratic drive-in rallies of this pandemic, accompanied Biden in an event focused on asking the black population to go out and vote.

“Pennsylvania is fundamental in these elections”, said Biden, who recalled the little margin that the state gave Trump in 2016. “The power to change this country is literally in your hands,” he added.

Biden attacked Trump where he can do the most damage: in his management of the COVID-19 pandemic, which he said has been “almost criminal.”

“President Trump is terrified of what happens in Pennsylvania,” Biden said in another of his acts.

Biden and his running mate, Kamala Harris, will spend tomorrow all day in different Pennsylvania counties and will close in two events in Pittsburgh and Philadelphia, the two Democratic outposts in the state, a campaign framed under the slogan “Battle for the Soul of the nation”.

On the shores of the great lakes, with Canada in sight and the “motor city”, Detroit as a symbol, the state has traditionally voted for the Democrats.

It was the heart of the country’s automotive industry, and thus one of the heavyweights of union power in the US.

The three major companies in the sector, Ford, General Motors and Chrysler, still headquartered in the state, although its influence has noticeably diminished.

Y in 2016 Trump surprised by beating his Democratic rival, Hillary Clinton, by a narrow margin of less than 11,000 votes.

“If we hadn’t won, Michigan wouldn’t be here. We will win again, and return to that wonderful place, the White House“Trump said during a ceremony this Sunday in a cold rain in Washington (Michigan).

Michigan has almost 10 million inhabitants, of which 5% are Latino, and it has 16 electoral votes.

The state has also been the scene of one of the strangest episodes of the campaign and a reflection of the extreme political polarization that the country is experiencing.

In early October, the FBI announced the arrest of several people linked to a far-right militia charged with plotting the kidnapping and possible murder of the state’s governor, Democrat Gretchen Whitmer.

According to Michigan Attorney General Dana Nessel, the defendants They belonged to the Wolverine Watchman militia and intended to instigate a civil war in the country.

Whitmer has been the object of criticism from conservative groups, as well as Trump himself since he decided to impose the closure of commercial activity and agglomerations in the state as measures to contain the covid-19 pandemic.

Two thousand kilometers to the south, on the border with Mexico, Texas has long been a Republican stronghold.

In fact, the last Democratic candidate to win the race in that southern state was the former president Jimmy Carter (1977-1981), almost half a century ago.

But record of more than 9.6 million early voters indicates that this trend could change this November 3. In 2016, when Trump won by 9 percentage points, the total turnout in Texas was 59.4%, while with current voting data, the state has already reached 57% turnout.

That shows how fierce the battle will be for one of the states that gives the most electoral votes (38) to reach the desired 270 granted by the Presidency.

Real Clear Politics weighted average for the latest polls They give Trump the winner by a distance of 2.3 pointsTherefore, losing that status would undoubtedly be a severe blow to the current president’s aspirations to continue in the White House.

And much of the decision-making power will fall into the hands of the Latino population, since it accounts for 30% of the electoral census in Texas, according to data from the Pew research center.

Biden’s campaign has been appealing to that group in recent weeks, including an appearance by his wife, Jill Biden, in the mostly Hispanic border El Paso.

Other demographic groups crucial to the presidential election in Texas will be young people, college graduates and women from the suburbs of Houston, Dallas, San Antonio and Austin, the big cities.