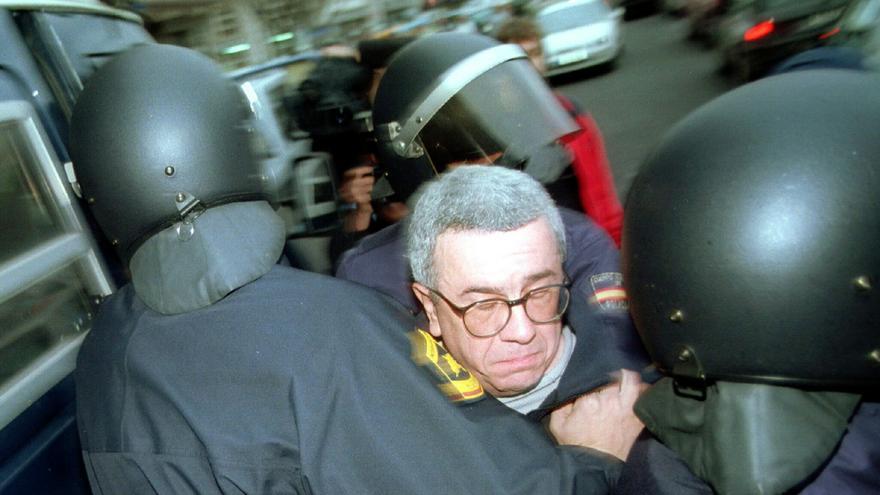 But above all, the Reace case, an episode of high-profile corruption discovered in some oil deposits in Redondela and in which a brother of Franco was implicated. There were deaths in strange circumstances and dark episodes that were never clarified. The information was carried by Pepe Rei, who with this material published a successful book, The Reace Case, which is, and continues to be, an example of good reporting. Later, he was transferred to La Voz de España in San Sebastián, which must be explained because among the many falsehoods that were said there was one that already attributed an initial collusion with the nationalist world. The reality is more prosaic. In Vigo they hung up on him the financial failure of a sports publication and he needed money that he did not have to get out of trouble. It occurred to him that he could achieve this by adding to his salary as editor of the Movement Press the monthly distribution of profits from the Guipúzcoa Press Association, which was around forty or fifty thousand pesetas. Much money at the time. We did the pertinent management with the managing director of the organization (I was president of the Inter-Center Committee and Pepe one of the members) and the transfer was successful. The rest is known history (at least by some). The ineffable Minister of Culture, Ricardo de la Cierva, or “De la cabra” as he was called sotto voce in some Madrid media, ordered the closure by the Armed Police of

La Voz de España (the newspaper with the largest circulation in Guipúzcoa) because someone informed him that it was a cave of ETA members (among those supposed ETA members was a cousin of Marcelino Oreja) and he sent home charging all the personnel with the police inside . Never, as far as I know, was it the case that a State newspaper was occupied by the Police of that same State and even less that that repressive State continued to pay the terrorists’ salaries. The protest demonstration in San Sebastián was great and leaders of all the parties fraternized at the head of the city.

Leisure is a bad advisor (the unusual lockout lasted more than three years) and Pepe, who wrote for El País and the weekly Interviú, came up with the idea of ​​launching a newspaper that would take advantage of the hole in the kidnapped Voz, substituting Euskadi for Spain. The legal structure of the company was that of a cooperative and you could join it just by contributing one million pesetas (five hundred thousand of your own money and the remaining amount from a subsidized fund). A young Asturian journalist came to see me to ask my opinion on the viability of a project in which I was thinking of investing. I encouraged her to do it. “I don’t know how long the newspaper will last on the street,” I told him, “but while you do it you will learn the trade and above all you will have fun.” The appearance of a new newspaper was not well regarded by the most radical sectors and soon brochures appeared calling Pepe “enemy of the Basque people” and “spy” of Interior Minister Juan José Rosón. But, to the general surprise, La Voz de Euskadi overwhelmed Egin on the left and began to give highly compromised information. The final closure was not long in coming and Pepe found himself unemployed again, since he had renounced his right to join the public administration after the disappearance of the autonomous State Social Media organization. Until the managers of Egin, who had proven his professional worth, offered him a position in the sports section. When he called me to tell me, I recommended that, out of prudence, he never leave football and its surroundings. For a time like this he was and had sounded controversial with Toshack, the Welsh coach of the Real Sociedad. But as soon as he could, he returned to his inalienable passion, investigative journalism, as practiced by the German Günter Wallraff, which served as the inspiration for his book The Scoundrel Journalist. Under Egin’s protection, Pepe and his research team uncovered numerous scandals related to drug trafficking, torture in barracks, irregularities in the awarding of public works, black money financing of political parties and millionaire exchanges between statesmen. And there they are, to consult the detail, their books.

All that information that there was no way to deny, however rigorous, earned him the enmity of star judges, political achievers and characters from the business underworld. One of the prominent men who felt aggrieved, the Basque Government’s Interior Minister, Juan María Atutxa, launched a poisonous slogan in the media: “Pepe Rei aims and ETA shoots.” A pointless accusation because no one can believe that a terrorist organization, operating in hiding, has to wait for the appearance of a magazine to find out what its next targets are going to be. Many of the anticipations that the Ourense journalist uncovered are now timely information. Like the hidden fortune of the emeritus king and the murders and torture that took place in the Inchaurrondo barracks. By the way, years ago the courts sentenced Pepe to compensate General Rodríguez Galindo for slander that was not such, as is now recognized. Investigative journalism and reporting to its ultimate consequences is a dangerous exercise. Pepe had been in a wheelchair for almost twenty years due to a traffic accident in circumstances that have not been entirely clarified. Rest in peace the friend.