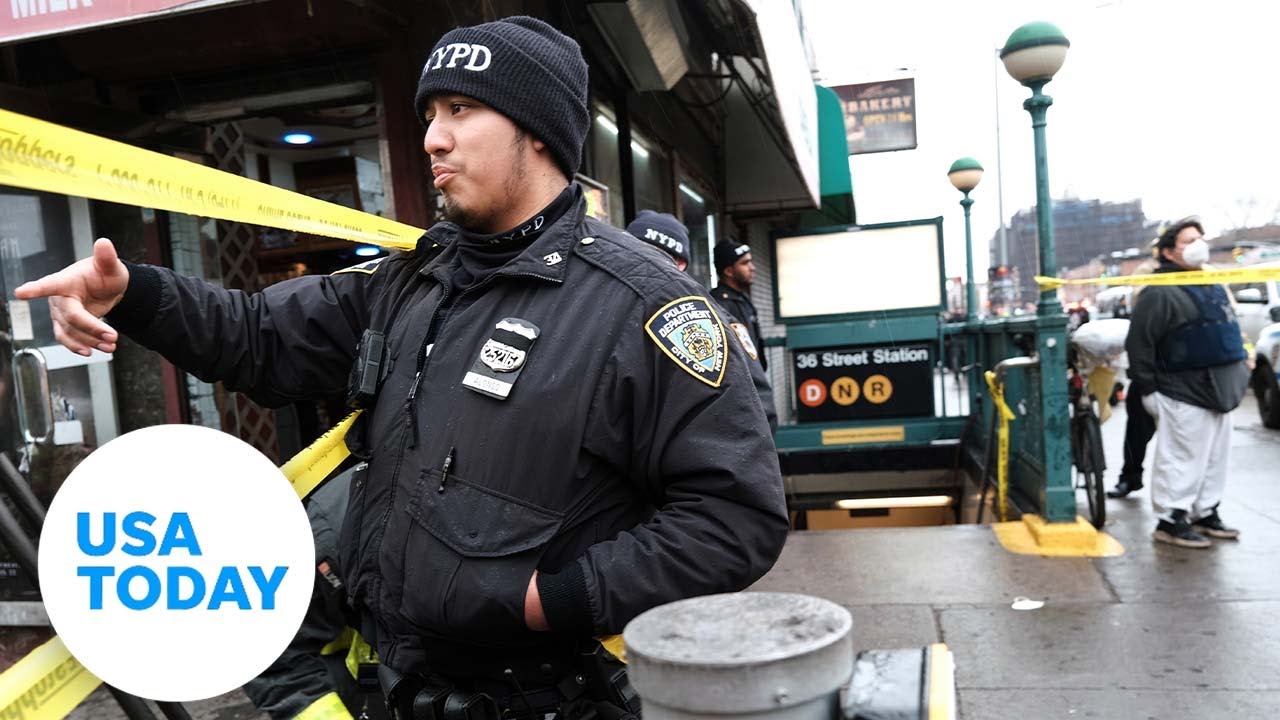 NEW YORK – Police have identified a person of interest in connection to the chaotic attack on a Brooklyn subway during rush hour Tuesday morning, ramping up the all-day manhunt that so far has not led to any arrests.

Frank James, 62, was called a person of interest in the attack, who left at least 29 injured, New York Police Commissioner Keechant Sewell said at an evening news conference. Police refrained from calling him a suspect in the shooting. He has ties to both Wisconsin and Philadelphia, authorities said.

The attacker, wearing a gas mask, set off two smoke canisters before shooting. He fled the Brooklyn platform in the panic, leaving a subway car filled with screaming commuters and bleeding victims. At least 10 people were shot and at least 19 others were taken to hospitals for injuries ranging from smoke inhalation to shrapnel wounds.

Authorities say the gunman fired 33 times with a Glock 17 99mm semi-handgun, which was found in the subway.

Police helicopters hovered for hours above the Manhattan-bound N train in Brooklyn’s Sunset Park neighborhood as authorities investigated the scene, finding a firearm, smoke devices and other items, according to two law enforcement officials who were not authorized to discuss the investigation and spoke on condition of anonymity to The Associated Press.

Police did not release a suspect’s name, nor a motive. Authorities found a U-Haul van with Arizona license plates they’d been searching for in connection to the attack, but the vehicle was empty, one official told the AP.

Police closed off a street about four miles from the shooting scene and worked to clear nearby businesses while awaiting a bomb squad and the highly specialized emergency services unit.

“Law enforcement has alerted us to its search for a rental van and its possible connection to a suspect in today’s incident in New York City,” U-Haul spokesman Sebastien Reyes said in a statement to USA TODAY. “We are working closely with authorities to ensure they have any and all available information to meet their needs.”

WHAT WE KNOW:‘We will not allow New Yorkers to be terrorized’

The Metropolitan Transportation Authority announced last fall that it had put security cameras in all 472 subway stations citywide, saying they would put criminals on an “express track to justice.” But Mayor Eric Adams told WCBS that there was “some form of malfunction with the camera system” at the subway station. It’s unclear whether only one camera was not working or all of them, he said.

Adams told MSNBC that authorities recovered “solid evidence” and were “zeroing in” on a possible identity of the gunman. He said he couldn’t put “a timetable” on an arrest.

Authorities obtained a photo of a possible suspect and worked to confirm his identity, two law enforcement officials told the AP.

Investigators believe the gunman’s weapon jammed, preventing the gunman from continuing to fire, the officials said. The federal Bureau of Alcohol, Tobacco, Firearms and Explosives completed an urgent trace to identify the gun’s manufacturer, seller and initial owner.

The attack unnerved a city on guard about a rise in gun violence and the threat of terrorism. It left some New Yorkers jittery about riding the nation’s busiest subway system and prompted officials to increase policing at transportation hubs from Philadelphia to San Francisco.

The shooting occurred before 8:30 am on a Manhattan-bound N train in Brooklyn’s Sunset Park neighborhood, Police Commissioner Keechant Sewell said at a news conference.

The train was waiting to enter the 36th Street station when the man put on the gas mask and opened the canister. The train filled with smoke as the man fired, Sewell said. The shooter, whom Sewell described as a Black male with a heavy build, wore a green construction vest and a gray sweatshirt, she said.

Firefighters responded to a call about smoke at the subway station at 36th Street and 4th Avenue. Crews found the shooting victims and several “undetonated devices,” according to a New York City Fire Department statement.

Sewell said Tuesday afternoon there were no known explosive devices on the train. The incident was not being investigated as an act of terrorism “at this time,” but she asked for the public’s assistance with any photos, videos or information about the incident and shooter.

New York Gov. Kathy Hochul said New Yorkers’ “sense of tranquility and normalness was brutally disrupted by an individual so cold-hearted and depraved of heart that they had no caring about the individuals that they assaulted.”

President Joe Biden offered his prayers for the victims of the subway shooting and praised those who quickly sprang into action.

“We’re grateful for all the first responders who jumped into action, including civilians who didn’t hesitate to help their fellow passengers and try to shield them,” he said during a trip to an Iowa processing plant that produces ethanol.

In addition to the gunshot victims, other people suffered from smoke inhalation, shrapnel wounds and injuries related to the panic after the shooting, Kavanagh said.

Twenty-one people were taken to NYU Langone Hospital in Brooklyn after the attack. Ten were released by Tuesday afternoon. The 11 remaining patients were treated for injuries including gunshot wounds and smoke inhalation. They were all in stable condition, spokeswoman Lacy Scarmana said. New York-Presbyterian Brooklyn Methodist Hospital said three patients injured in the attack were treated. One was shot, another had a fractured bone, and the third was not trauma-related. All three were in stable condition.

Five people were treated at Maimonides Medical Center, spokeswoman Suzanne Tammaro said. Three were treated for smoke inhalation and released. The other two had been shot, though the injuries weren’t life-threatening.

Avellana De La Cruz, 25, was texting her boss that she would be late to work while waiting for the subway when dozens of people, some with bloodstains, started running out of the station. De La Cruz said people were crying and shouting while others called the police or recorded with their phones.

Confused, De La Cruz remained at the station until an announcement told riders to evacuate. As De La Cruz exited the station, a woman covered in blood with a wound across her face de Ella asked for help finding police. Together, they left the subway and found an ambulance.

“One minute I was on my phone, and the next everyone was running and crying,” De La Cruz said. “It was chaos in there and hard to focus on whether the attack was really over.”

Tim O’Donnell, 31, who regularly commutes into Manhattan on the N train, said he had headphones on when he heard a driver tell riders to board an R train across the platform. Then he heard the loudspeaker announcement to evacuate.

On the way out, O’Donnell said, he saw a man with his pant leg rolled up and what appeared to be a bloody gash on his leg. O’Donnell said he thought the man might have fallen on the steps in the drizzling rain, but he received texts about the shooting as he headed home.

Photos on social media showed multiple people bleeding on a smoky subway platform shortly after reports of the shooting. the subway station serves the D, N and R lines, which all run into Manhattan. Services on the lines in Brooklyn and some Manhattan stations were suspended, according to the Metropolitan Transportation Authority.

Rogelio Miranda, a cashier at a nearby supermarket, said he was working an early shift when a woman came inside, screamed, “There’s blood all over the station” and ran into the restroom. The store stayed open, and people came inside to wait for cabs and Ubers, Miranda said.

“Violence on the subway isn’t new to our area, but seeing so many people so terrified and so many people saying they saw people covered in blood, it’s crazy,” Miranda said.

John Chiu, who works in sales around the corner from the subway station, said that about 10 minutes after he arrived at his office, he heard police sirens blaring.

“I thought it was just another accident because … honestly, it’s an everyday occurrence,” said Chiu, who normally drives to work from his Flatbush home.

Within a few minutes, Chiu knew it was something more. I have checked to see whether everyone who normally takes the subway had arrived at work. They all had. “It was a relief,” he said.

“We will not allow New Yorkers to be terrorized, even by a single single,” Adams said in a brief video.

Crime in the city’s sprawling subway system has ticked up. Transit crime has increased 68% compared to 2021, NYPD statistics show.

Adams released a safety plan this year as part of efforts to lower crime on the subway.

The subway system has been the target of several mass attacks. In December 2017, a homemade bomb detonated in a pedestrian tunnel that links two train lines to a bus terminal in midtown Manhattan. Not one was killed, but three people suffered minor injuries. Akayed Ullah, a Bangladeshi immigrant, was convicted on terrorism charges for carrying out the attack on behalf of the Islamic State.

Dozens of riders were injured in December 1994 when two homemade gasoline bombs exploded in a crowded downtown No. 4 train that was stopped in the Fulton Street station beneath the Manhattan financial district. Edward Leary, a New Jersey computer analyst enraged by the loss of his job, was found guilty in 1996.

Najibullah Zazi, a legal permanent resident of the USA from Afghanistan, acquired bombmaking components and drove them to New York, intending a series of strikes in September 2009.

When he learned authorities were investigating the plot, he discarded the explosives and drove back to Denver, where he was arrested. Then-Attorney General Eric Holder described the plot as “one of the most serious terrorist threats to our nation since Sept. 11, 2001.”

“It could have been devastating,” Holder said.