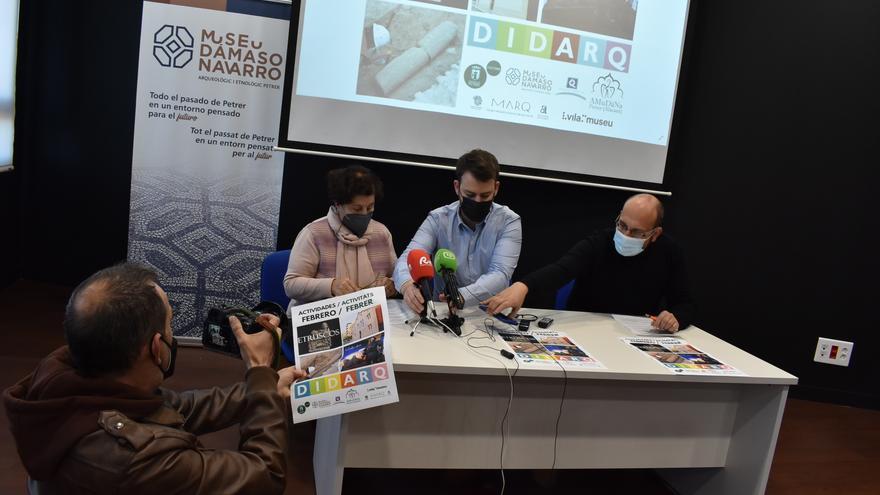 The Dámaso Navarro de Petrer Archaeological and Ethnological Museum is gaining momentum in terms of activities and this February month will pick up cruising speed with a complete program within the framework of the third anniversary of its transfer to the current facilities in La Font street. “We are going to strengthen collaboration with other museums and recover workshop activities for children that have been altered as a result of the pandemic”, has indicated the councilor of the area, Fernando Portillo, who has recognized that February is a very “special”For the flagship of Petrer’s historical heritage conservation. For her part, the president of the Friends of the Museum Association, Shell Navarro, who has also abounded in the importance of maintaining relations with other museums and “especially with some, such as the one in Villajoyosa, whose director is Antonio Espinosa, who is also a professor at the University of Alicante and has a deep connection with Petrer, his hometown”. the director of the museum, Ferdinand Shopkeeper, has broken down the program that begins on Sunday, January 30, from 11:30 a.m. to 1:30 p.m., with a complementary activity to the exhibition stone guardians, focused on the castles and fortresses of the province of Alicante. A family workshop which consists of explaining the Islamic and Christian medieval part of the museum using 3D recreations, as well as the temporary exhibition in which games will be made. There will also be crafts and the participants will take a cut-out of the Petrer castle. Already in the month of February, on the 8th, coinciding with the day of the reopening of the current facilities, a new piece will be presented, in this case of large dimensions and related to health, common in many homes in the second half of the 20th century, which will be added to the display of donations in which the Andalusian whistle of Puça and the blunderbuss of the Moors and Christians festivities. On Thursday, February 10, at 7:30 p.m., the conference of Antonio Espinosa Ruiz, director of Vila Museo, doctor in Prehistory and Archeology from the Autonomous University of Madrid, and since 1996 Head of the Municipal Section of Archaeology, Ethnology and Museums of the Town Hall of Villajoyosa. This conference will be complemented by a visit to Villajoyosa on Sunday the 13th to visit the Museum, Casa Labarbera and other elements of the city’s heritage. On Saturday the 12th, from 11:30 a.m. to 1:30 p.m., there will be a family workshop at that will be recreated archaeological excavation in the museum facilities and focused on the Roman period. In it, participants will be able to experience discovering objects and how to identify them. Together with this workshop, a guided tour of the archaeological remains found in the Baix square can be made. On Sunday 20, from 11:30 a.m. to 1:30 p.m., the DIDARQ–Prehistory workshops directed for the whole family as well and in which the objective is to learn, having fun, what prehistory is and how people lived in this long period of time, with the historian Juan Carlos Valero. And, finally, on Friday 25, there will be a guided tour of the Etruscans exhibition on display at the MARQ of Alicante.