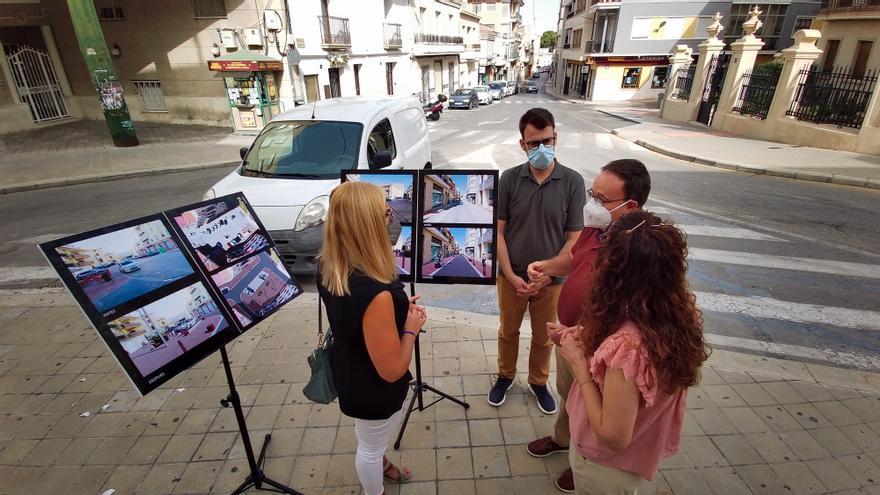 The project of Remodeling for Sustainable Urban Mobility de Petrer in the streets Gabriel Payá, José Perseguer and Cánovas del Castillo, which is popularly known as Derrocat, has been presented this Friday with an investment that exceeds the million euros. The mayor, Irene Navarro, has indicated that it is an emblematic project that is part of the strategy of revitalization and modernization of an important area and that will generate a great transformation of the urban center of Petrer, since it also represents a key piece in the design of the Petrer of the future. The three streets on which it is going to act have historically had a role as the main thoroughfare of the city, by linking the historic nucleus with the urban landmarks that have defined the growth of the city. The Government Team’s approach is to reinforce the leading role in the life of the locality of these streets with a transformation that “Reinforce its role as a space for meeting and coexistence, as well as a commercial and service hub”, Irene Navarro has pointed out.

The mayor of Petrer listening to the explanations of the person in charge of the project. INFORMATION

The councilor for Urbanism, Fernando Portillo, explains that the remodeling of these streets “It is part of a global project for the entire area that includes the improvement of pedestrian and traffic mobility, the creation of spaces for citizen coexistence, the reactivation of commerce and the development of tourism potential “. Portillo explained that the works will consist of the construction of a rainwater collection network (currently they lack this infrastructure); the wastewater network is going to be replaced (the current one dates from 1972 and is almost fifty years old); the renewal of the drinking water network (the current one is made of fiber cement and with little depth); the channeling of the public lighting network and the replacement of luminaires; single platform paving and the installation of urban furniture. The urban approach for these streets with the creation of a single platform will allow the use of it by both pedestrians and vehicles. In this way, various alternatives for it will remain open. The uses and regulation between vehicles and pedestrians could even be alternated depending on the needs, times of the year or schedules. In addition, there will be a charging point for electric vehicles and all urban furniture will be removable to make it compatible with the events and parades of the Moros y Cristianos festivities.

In fact, the pedestrian part will gain weight with wider spaces and the direction of Leopoldo Pardines street will be changed, which will be up instead of down as it currently is, and the Esplanade promenade will be one-way. . “This project is based on a strategic plan after the study prepared by the University of Alicante for the revitalization of the downtown area, and measures will continue to be implemented so that this axis is updated and is at the same level as other areas of the population “, has indicated Portillo.