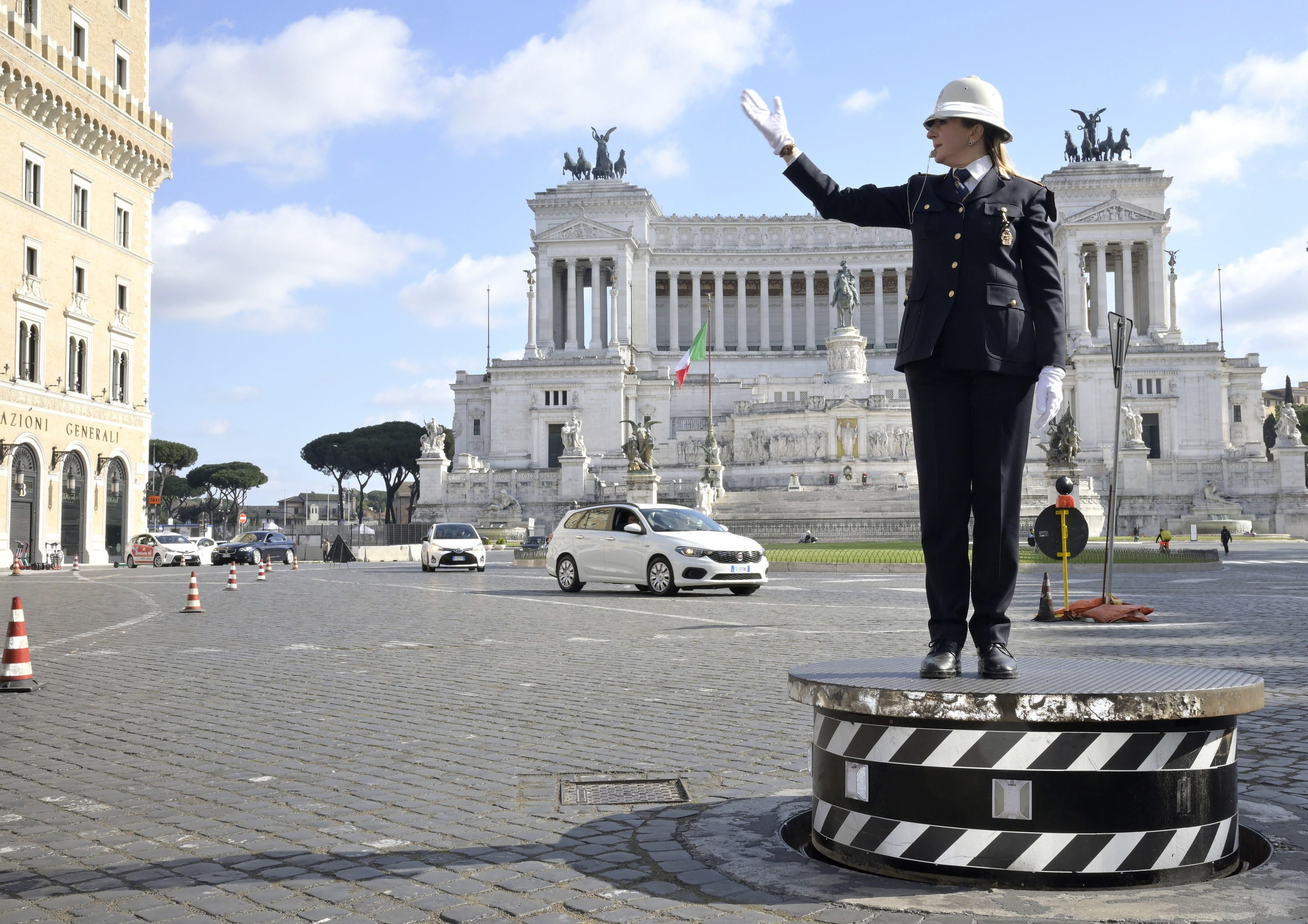 If, as the cliché says, all roads lead to Rome, within the Eternal City almost all streets end in the central Piazza Venezia. Traffic is overwhelming in most of the capital, but the square, open to more than 10 avenues, can be considered the center of circulatory chaos in the Italian capital.

At this junction, as anarchic as it is fascinating, buses coming from Via Nazionale converge with motorcycles that leave Via del Corso, with skateboards or bicycles that arrive from the Imperial Forums area, or with cars that come or go towards the Campidoglio or Parliament. Added to this are the numerous pedestrians who change streets or cross to the center of the roundabout to photograph the Altar de la Patria, the imposing monument that crowns the square. They all flow into this jungle of vehicles, only interrupted by the pandemic, with an agility that leaves you perplexing. And without any traffic lights.

In the center, and since the 1920s, an urban guard with a helmet and white gloves used to stand on a pedestal, who, in a constant choreography, undertook the enormous task of putting order in traffic, whether in rain, wind or rain. under the righteous sun of the sweltering Roman summers.

The figure of the agent, nicknamed “conductor” and portrayed in numerous films and countless postcards, had become a symbol of the city, disappeared last year due to the works in the square.

Recently, it has returned to its classic podium, which was first made of wood, then concrete and is now retractable to avoid incidents. His return is also perceived as a certain return to normality after the harsh confinement of last spring, which emptied the center of the city. A local policeman interprets it like this: “The return of the agent also symbolizes the return of traffic, life, noise, to the center, which has never been so deserted. It is a beautiful picture ”.

It is also a special occasion because, after a while, a woman returns to control traffic in this key point of the city. Although it is not the first time that an officer has performed this role, it is more common for male police officers to occupy the podium. The agent in charge of this, Cristina Corbucci, has declared to the local media that for her it is an honor and a “great responsibility” to represent the women of the Police. “In the last competitions we have entered more women than men. It is fair that there is a public representation of the female part of the body ”, he said. And he added: “We are very close to motorists and their comments are heard. It makes me laugh that women, when they pass, are surprised and some cheer me on ”. Local police sources indicate that several officers are being trained for the position, “with an increasing presence of women.”

Franco Teppi jokes from his motorcycle while standing on a pedestrian crossing in the area: “The guard in this square must be the only traffic officer appreciated by the Romans.” In fact, it used to be customary for the police to leave gifts on the podium on Three Kings Day. Such expressions of appreciation for someone whose primary role is to bring order and punish traffic offenses are rare among Romans.

Part of the responsibility for this unusual affection belongs to the actor and director Alberto Sordi, who in his film The mayor, the guard and the little giraffe (1960, The policeman, in its original title) plays a rookie cop new to a position at least critical who became an icon. In 2012, Woody Allen signed a royal guard, Pierluigi Marchionne, for his To Rome with love after seeing it in action. It was then said that the American filmmaker slightly rewrote the script to include the scene.