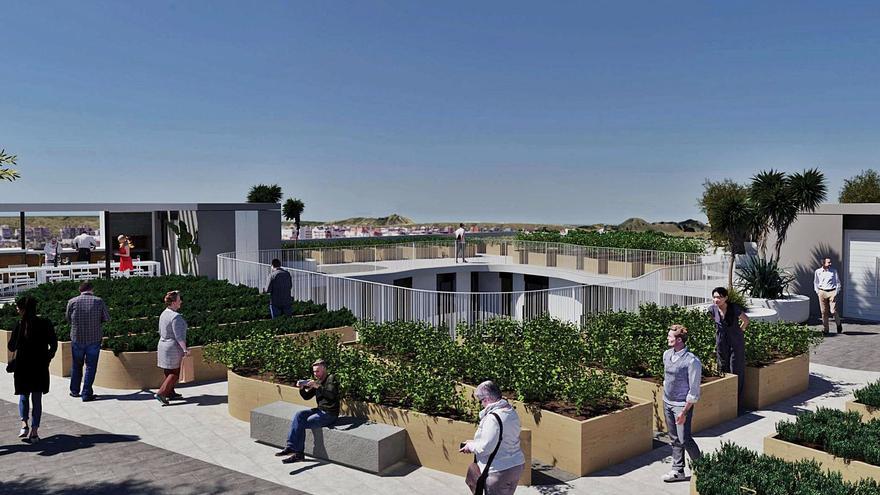 The facade of the future “sociable” building in Pimesa. | GEA ARCHITECTS

The property, which will cost around 6.5 million euros, will be built on a municipal site on the E-5, between the San Antón and Travalón neighborhoods, and is a pioneering initiative, since never before had Pimesa offered housing under the regime for rent and with this philosophy similar to that of “cohousing” that he initially proposed, but with some changes. And is that to access these floors will have to meet a series of conditions. One of them is that the tenants must have a minimum age, a minimum income and will sign a social contract, which means that they will have to comply with rules of coexistence.

And it is that the property is designed so that its residents share time and spaces, as explained by the mayor of Urbanism, Ana Arabid, so the building that Pimesa has projected and designed by the Elche office Gea Arquitectos has a large patio central, where all the houses face it, and with 867 meters of commercial premises on the ground floor focused on carrying out activities.

Likewise, the creation of a new volunteer figure such as the “sociable entertainer” is planned, and the municipal social services will also be involved.

In this way, this pilot building will not be the protagonist, but will help to create a lifestyle supported by coexistence, a new concept of aging in order for the elderly to live as long as possible in their homes.

The homes will be mid-range, with one, two and three bedrooms, will have around 60 square meters and will cost between 390 and 490 euros per month in addition to the garage space.

With this action, after betting on protected housing before the economic crisis or the regeneration of the San Antón neighborhood, Pimesa carried out a study with surveys before the pandemic to detect if there is a demand for this type of construction against loneliness in Elche. And he found an affirmative answer.

The municipal society later saw that with the initial idea of ​​”cohousing” the drawback is that the promoters are the tenants themselves and have to set up a cooperative, which is why they saw difficulties in the viability of the project. For this reason, Pimesa gave a twist to this initiative, in which the irruption of the pandemic and the social changes that it has produced had a lot to do with it. Mainly, the concept of the property has gone from offering homes for sale to rent, so that these flats do not change their philosophy over time.

With the preliminary project for the building already completed, the City Council company is waiting for the Generalitat Valenciana to open the call for housing aid for administrations and businesses that promote rental housing this year.

The mayor of Urbanism assures that what has been wanted is to propose a model that is viable, hence that it has opted for the rent, although she recognizes that the project is still in a very initial phase and the possibilities of financing. And that is why there are still no clear dates on when the property could be built.