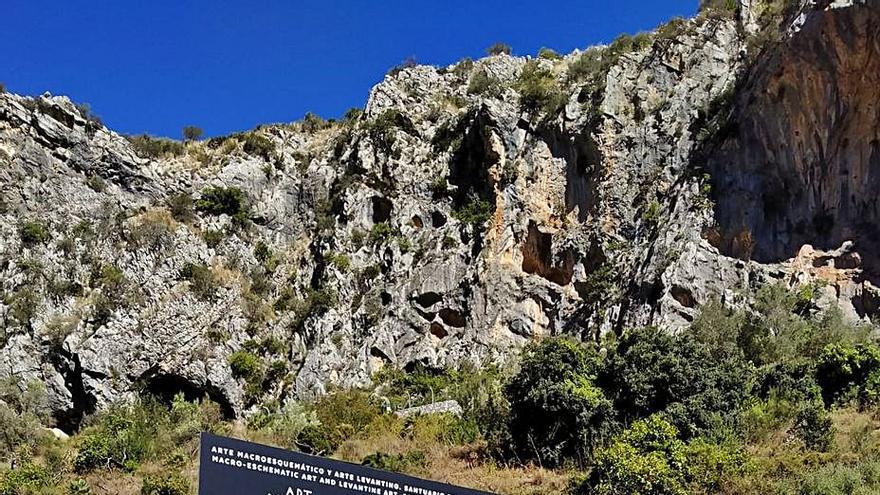 The result of this research has been collected by the sociologist in an article published in the Swiss magazine “Religions”, under the title Images of the Mother Goddess in the sanctuary of Pla de Petracos. The sacralization of agriculture.

The mountain in front of the paintings that closes the sanctuary in a circle. | JAR

The first study was carried out by Roche in 2007, when Jorge Soler, curator of Prehistory at MARQ and now director of Mubag, invited him to participate in a congress on Neolithic archeology at the Gil-Albert Institute. “I did a reading of the Pla de Petracos in relation to the images, using the methodology called iconological analysis, to see the images and relate them to their context, so that information is obtained on the way of life and the religious thought they reveal.”

What were then hypotheses have become certainties, thanks to the continuity of his research and also to that of the archaeologists who have worked in this enclave located in Castell de Castells and declared BIC and a World Heritage Site. «Archaeological investigations maintained that the person praying was a male figure, but I identify him with a woman in a birthing position, with her legs up, and another of the figures is also a woman with a swollen belly next to some seeds. of its location with respect to the sun, as a link with fertility.

Pla de Petracos, a sanctuary dedicated to the Mother Goddess

Pla de Petracos, a sanctuary dedicated to the Mother Goddess

Another aspect that has been documented is the circularity of the sanctuary. “The area where the paintings are is semicircular and with the mountains in front it forms a closed circular space, so they are part of the sanctuary. In this sense, it ensures that the paintings are in the east, with the setting sun in front, “As a religious solar sanctuary in the broad sense, in which natural and religious iconography go together; the sanctuary was used for religious rites, but it was also a space of identity for Neolithic social groups ».

Also Read  An increasingly Trump only disputes the pulse for the Republican power: "The people are angry!" | USA elections

Another aspect that Roche highlights is the fact that where the sign announcing the Pla de Petracos has been located “there is special acoustics and nearby bones that looked like instruments were found, something that further supports the fact that it is a sanctuary. Like the researcher’s observation on the rock in front of the paintings, “with a concave shape, as if they metaphorically formed two arms open towards the sun.”

“The Pla de Petracos is what it is thanks to the Centro de Estudios Contestanos, Mauro Hernández and Jorge Soler, and the MARQ”, points out the professor who calls for “the excellent work done by the Archaeological Museum of Alicante to be enriched extending its musealization to the elements of the territory that are in front, to the Neolithic markers of the mountain, so that it includes not only the paintings but also the territory in which it is, because all that was part of the sanctuary.

Juan Antonio Roche remember that the Pla de Petracos “is one of the richest and most interesting sanctuaries of the Neolithic Age” and also “the oldest Neolithic paintings in the Valencian Community dated up to now”.