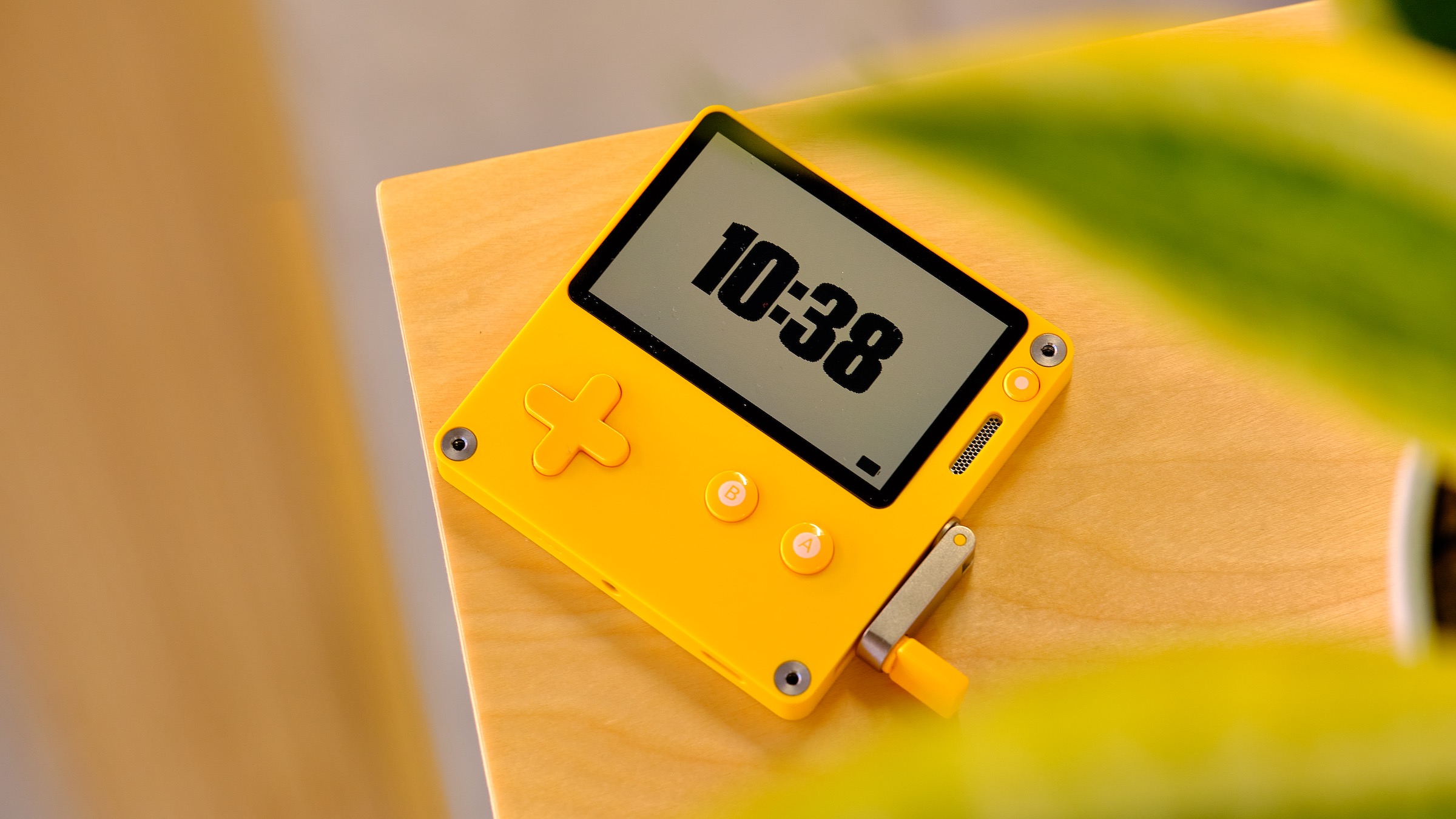 When in 2019 many of us were thinking more about new generation machines such as PlayStation 5 or Xbox Series X, a company called Panic (with tradition in the world of software and video games) considered that it was a great idea to launch a portable console with a one-bit, black and white screen and a joystick to control the games.

It couldn’t be more analog, more anachronistic, more retro. However, jolin, at least it caught my attention and yes, of course, I wanted the photorealism that the new consoles promised (and that we are still waiting for), but I also wanted to try the joystick console.

And, after a while on the market, this unit has fallen into my hands thanks to the generosity of Alberto Lloret, from HobbyConsolas, to do an analysis of the Playdate. You may never buy it and you may not have heard of it, but if you like curious pots, keep reading because this, of course, is.

Sections of the Playdate analysis:

This is one of those devices that fall in love at first sight. That yes, that in tastes there is nothing written, but it seems to me very, very pretty.

In the review of Playdate that Lloret published in Hobby a few weeks ago we can see that he also found it very attractive and as soon as you have it in your hands you will discover that it is not only beautiful, but also gives a very premium feeling.

It is true that for the price (180 dollars to which you have to add taxes) it can already be premium, but in the hand it stands out how well built it is.

It is very, very compact, very light thanks to its 86 grams and it is one of those that is a pleasure to carry in your pocket. I’m back to the feeling GameBoy Micro, a console that continues to freak me out in the middle of 2022, because it feels great in the hand and, despite its size, I find it quite comfortable.

The material is a yellow plastic that draws a lot of attention and is comfortable because the corners are rounded. There are no fingerprints, the plastic does not feel cheap and you have three holes with metal protection to… no idea, put a pendant for the wrist?

Like I say, I don’t know why, but there they are. On the front we have a few buttons that I will talk about next, a mono speaker that sounds pretty good, but if you turn it up to the maximum it will distort… and little else.

We have a 3.5 stereo jackyes, at the bottom, as well as USB-C and a microphone.

The screen seems very elegant to me because it has a thin black frame that combines wonderfully with the yellow color and the quality of it you can imagine.

It is an LCD panel with a resolution of 400 x 240 pixels and 1 bit. It is not in color, obviously, and it consumes very, very little energy because the pixels have the ability to memorize their black or white color to alternate between them without refreshing the panel.

You can see it well, it’s not backlit and viewing angles are good. There is not much to say, since… well, in the video and photos you can get an idea of ​​what the screen is like.

And nothing more, no slots for cartridges or extra buttons, but with a very special lever and a game system that is as original as the very concept of the console.

A stick-focused experience and an open dev kit

Surely you were waiting for me to talk about the lever and it didn’t come, but I really consider that the lever is not so much a question of design but of experience, directly.

Next to the elements of three of the corners, the lever is the only metallic element. I love this because it gives me very good vibes for durability.

The end we’re holding is plastic, swivel and it’s really comfortable, but if you think it’s going to be an annoying element, don’t worry because if the game doesn’t use the lever, you can fold it so that it’s more or less collected on the side straight.

Panic has not forced the developers to use this elementbut it is clear that it is the main reason for buying, since the games that we have tried and that make use of it are the most original, precisely because of the dynamics that are generated.

It is very rare to play with it at first, but as soon as you get the hang of it you wonder why no one -almost no one, that some peripheral had- has done something like this before. Curiously, there is no fishing game, which is the one you imagine there will be on a console with this control, but no.

In the end, the control mode is unique, but as I say, not all games use them. There some buttons come into play that have seemed to me to be very good to the touch and, regarding the games, in the fantastic HobbyConsolas analysis they tell you in detail about each onebut what I have to say is that… there is everything.

Some have enchanted me, others have seemed like a chestnut, there are more narrative and others more purely arcade.

Surely you will find one that you fall in love with, since there are 24but beyond those games of the first season, as they have called them, it is not clear what will come.

In the end, games are the basis of consoles and no matter how good hardware, very good design or very good control ideas there are, if they are not exploited by software, they are worth nothing because that machine becomes a paperweight. Nice, but expensive and useless.

Thus, right now there are 24 games, but for the future the ball is in the independent developers and, above all, in communities of enthusiasts who do little with the devkit (which, by the way, you can use for free from here).

On autonomy, the truth is that there is not much to tell. The good thing, great, is that it is charged via USB-C and no, there is no charger in the box.

They have learned a little bit from Nintendo, Samsung, Apple and Google and yes, you would surely appreciate it, but we don’t have any type of fast charge, so with any charger you have at home you will be able to power the console.

And about autonomy, there are two measurements. For one day we have the clock mode in which we can leave the console on a surface where a retro-style digital clock is displayed.

It is something similar to what Game & Watch reissues allow us to do, such as the anniversary of Zelda or Super Mario, and there Panic promises 14 days of autonomy.

Also Read  Apple employees rebel again for teleworking: "The company is afraid of the future"

Playing… things change. The company promises 8 hours, everything will depend on what you play, something that my colleague Alberto also comments on.

At the moment there are no ultra-demanding games with the hardwarebut since the devkit is free, tomorrow we may find some version of something that is a battery eater.

And coming to the end of the Playdate analysis, I really don’t know very well if I recommend it or not. This doesn’t usually happen to me, since I’m always clear (for a reason I dedicate myself to this), but sometimes everything is so relative that… well, you have to form your own opinion by reading and seeing different analyses.

The design freaks me out. It is the most beautiful piece of hardware that I have had in my hands in recent months (or years) along with things like the Xiaomi 12, the screen looks very good, the dynamics with the crank seem super original to me and it seems cute.

Nevertheless, I can’t recommend it to you for sure because, although I loved it, I don’t know if I would buy it, and that can already give you a clue of how confused I am. Why? Well, because yes, I love the concept of the game and the design, but it seems very expensive for the little security it offers us.

And it is that, the little games that are coming are curious, but surely not all of them will fit you, and it is not very well known what will happen when the 24 announced games are available.

Everything is in the hands of independent developersfrom users who play little games and share them or from yourself and, of course, that is not something that gives us too much security, really.

Yes, they are tied up with a port of Doom and surely there will be more classic games that are adapted to this little console, but It seems to me a somewhat expensive console considering what I say.

And before putting an end to this review, the thought that runs through my head is that of “20 seconds ago you were thinking about not buying it, but now you are about to reserve one for the next batch. Let’s see if you clarify yourself”.