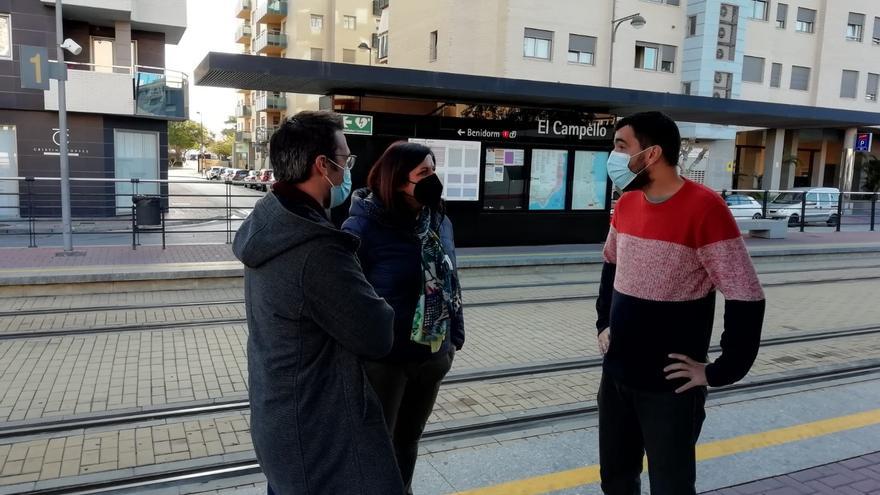 Unidas Podem-Esquerra Unida calls on the Council to unify the TRAM tariff in El Campello, to end discrimination in the northern area. Estefania Blanes, Member of Parliament and Deputy Spokeswoman for the United We Can-United Left Parliamentary Group Valencian Courts, has visited this Friday El Campello “to support the residents of the municipality in their demands in relation to public transport competence of the Generalitat”. The deputy, accompanied by the spokesperson for the municipal group of Esquerra Unida del País Valencià, Pedro Mario Pardo, and the spokesperson for the municipal group of Podem, Eric Quiles, wanted to “know first-hand the situation of the TRAM service in El Campello”.

On the other hand, the UP-EU deputy spokesperson in Les Corts has also met with residents of the north of the municipality, as the main affected by the TRAM rate situation in the municipality and to discuss the need to install a new stop in the north of El Campello. In this regard, Blanes has stated that “since we learned of the negative response from the Ministry in September we began to work with the municipal groups of EUPV and Podem in El Campello, to find a solution to this situation”, because for Blanes “the neighbors and residents of the northern area of ​​El Campello have been suffering for decades the decline in public infrastructures that make their lives difficult every day, it makes no sense that in the middle of the 21st century a TRAM stop is eliminated, without an alternative “. In this sense, the two campelleros councilors also showed their surprise “at the performance of the mayor Juanjo Berenguer (PP) today, who first thing in the morning issued a communication, received in September 2021, which responded to the motion presented by the EU to recover the TRAM stop in Cala d’Or, precisely on the day that our deputy comes to talk about the issue, “regretting that” in these four months the mayor has not done anything. “The Town Hall has reported today the refusal of the Department to replace the halt.

Also Read  Android suffers up to 47 times more infections than iOS, according to Apple

For Estefanía Blanes, “the Department of Territorial Policy, Public Works and Mobility must get down to work to correct the situation of the TRAM in El Campello as soon as possible” and has announced the presentation of a series of parliamentary initiatives with the aim of ” including the entire municipality of El Campello in Zone A of the TRAM and solving the lack of stops in the north of the municipality, is a social need ”.

But the left-wing deputy has wanted to go further and has also announced the launch of parliamentary initiatives in the Courts to request the reduction of fare zones in the Alicante TRAM, as well as the integration of Renfe commuter fares, buses urban and interurban and TRAM in the metropolitan area of ​​Alicante-Elche “as it has been implemented in the metropolitan area of ​​València”, because it has said, “would suppose a significant improvement in interconnectivity, prices and, ultimately, service”. For Blanes “we are talking about a fundamental axis for the mobility of women and men from Alicante, workers, students and also, for tourism and the economy”, “that is why we believe that the time has come to decisively face a transformation of public transport on the Alicante-Elche axis ”, has ended.

For his part, Pedro Mario Pardo, US spokesman in El Campello, declares that “our town is divided into two different tariff zones. It is a discrimination that we have endured for too long in El Campello. ” Pardo affirms that “it is not understandable that it is cheaper for our neighbors to travel to another municipality than to the center of their own town, from the US we have been denouncing this anomaly for some time.” Pardo recalls that “already, in 2011, the political formation presented a motion in the municipal plenary session on this matter, which was supported by all municipal groups.” The spokesperson points out “an evident lack of capacity of the different local governments to defend the interests of El Campello in higher institutions.” For this reason, they hope that, with the work of the UP-EU parliamentary group in Les Corts, it will be possible for the Botànic government to reconsider this unfair situation that they have endured for almost 20 years, and it will be solved “once and for all”.

Also Read  Cardiovascular diseases, the leading cause of death in Mexico | Society

Finally, Eric Quiles Centeno, spokesman for Podem in El Campello, added that “public transport has great shortcomings in the province, in the region and in El Campello, and we must face this challenge to improve people’s quality of life now. turn the environment ”.

“In recent years there have been timid attempts by the City Council to put the Council on the table, but the lack of interest on the part of certain political groups has made it fall by the wayside. Our intention is to persevere until we get a claim that anyone would consider fair and necessary, “he says.

Pardo and Quiles have shown their gratitude to “our deputy Estefanía Blanes, for her involvement in this matter”, and show all the support from the municipal level to defend these initiatives in the Corts.