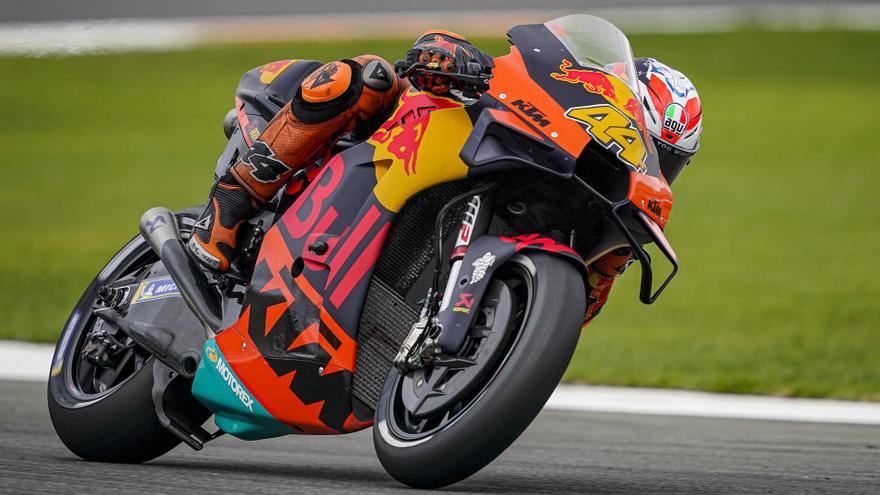 The Spanish Pol Espargaró (KTM RC 16) surprised all his rivals in the last minute of the official classification for the MotoGP European Grand Prix at the “Ricardo Tormo” circuit by achieve his second pole position in the MotoGP category from the hand of the Austrian manufacturer and in conditions that were not the best.

The youngest of the Espargaró brothers overcame the adverse conditions of the asphalt of the Valencian Community track to roll in 1: 40.434, a record that none of his rivals could beat and with the world leader, the Spanish Joan Mir (Suzuki GSX RR) in fifth position.

The bad streak of Maverick Viñales (Yamaha YZR M 1) continued, and in the fourth free practice he again suffered a fall with the motorcycle equipped with the sixth engine, although neither the motorcycle nor the rider suffered considerable damage, but that forced him to return to his workshop pushing his motorcycle stopped helped by several commissioners.

In the first classification Danilo Petrucci (Ducati Desmosedici GP20) was the first to set a benchmark record, followed in the first instance by the Portuguese Miguel Oliveira (KTM RC 16) and the German Stefan Bradl (Repsol Honda RC 213 V), although they were all defeated shortly after by the “recovered” Valentino Rossi (Yamaha YZR M 1), who He was only able to play this second day of the MotoGP European Grand Prix when he was waiting for the negative result of his last PCR to be able to travel to Valencia.

There were many changes to the head of the timesheets of this first classification, in which Maverick Viñales was also, perhaps somewhat discouraged by the fact that you will have to race five seconds after the pit lane opens to comply with the sanction imposed for using that sixth engine.

With less than five minutes of Q1 training, Viñales entered his workshop to change the rear tire and make one last, unsuccessful attempt to advance to second classification, as neither did Valentino Rossi or Alex Márquez (Repsol Honda RC 213 V), then Those who achieved it were Miguel Oliveira and the French Johann Zarco (Ducati Desmosedici GP19).

Shortly before starting the second classification the great doubt of all classified pilots It was knowing the type of tire they would use, with the ground drying out in some places, but still very puddled in general terms, which led all of them to go out with rain tires and, in those strange conditions, the first best time was for Alex Rins (Suzuki GSX RR), but still with a lot of room for improvement.

Once again, as happened during the third free practice session, the Australian Jack Miller (Ducati Desmosedici GP20) took a long time to decide to go out on the track – he did it with less than eight minutes to go – where the Japanese Takaaki Nakagami (Honda RC 213 V), the Spanish Joan Mir (Suzuki GSX RR) and the Portuguese Miguel Oliveira they had already surpassed the record of Rins, who soon after regained two positions.

On his first fastest lap, Jack Miller placed second behind Nakagami and ahead of Pol Espargaró and Alex Rins, still with almost four minutes of training ahead, in which the world championship leader rose to third place.

Nakagami tried to improve his record but ended up on the floor almost at the same time that Alex Rins regained the first position and Joan Mir was “getting” third, although Pol Espargaró made them all lose a position by taking the lead with 1: 40.434, a time that none of his rivals could beat.