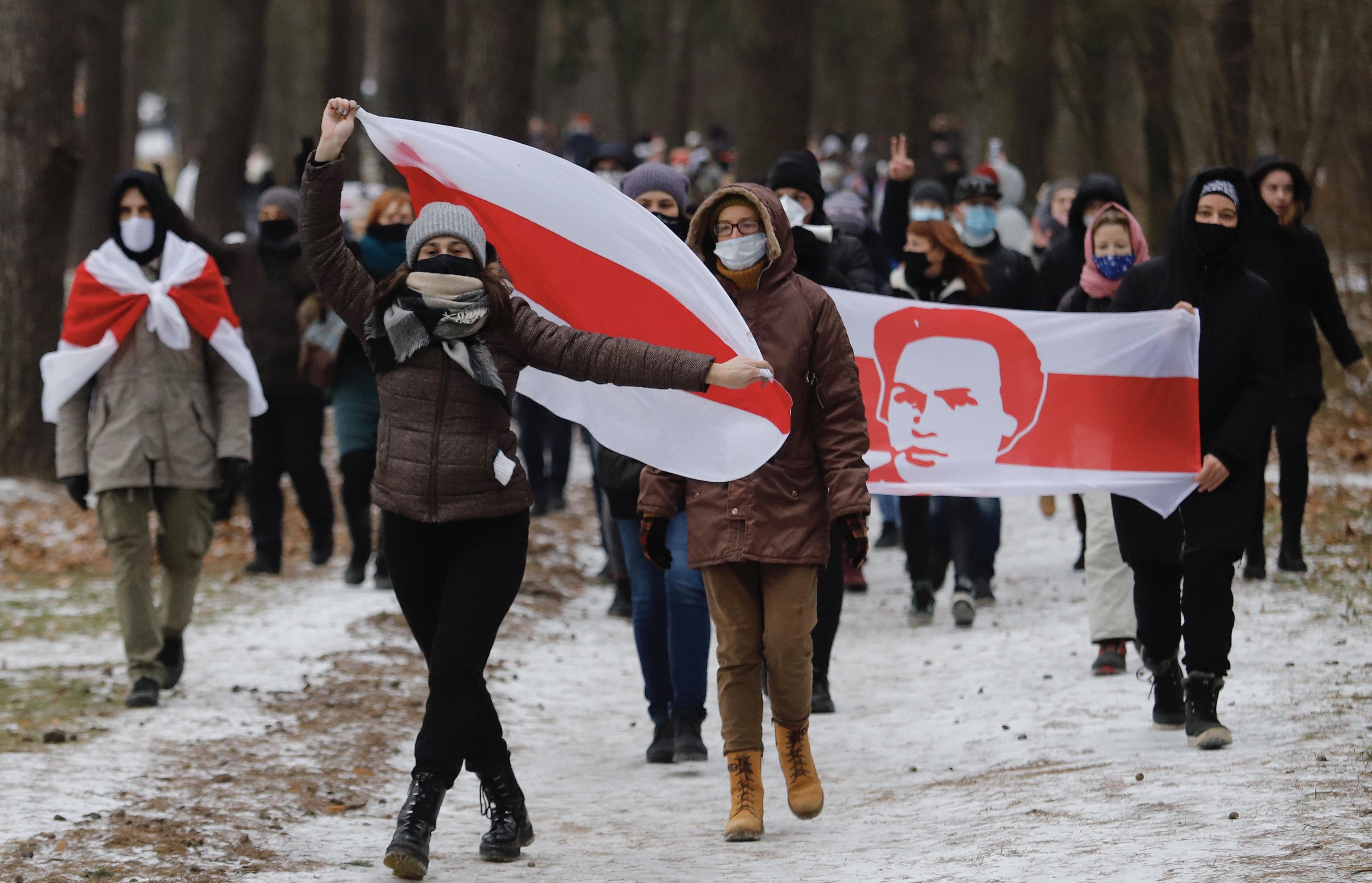 Georgi Kolbanov spent a day and a half in a narrow cell measuring four by six meters, with no roof and a concrete floor. A space in the Okréstino detention center, on the outskirts of Minsk, in which the Belarusian authorities crowded 80 people arrested in the first days of protests against electoral fraud. “After having us on our knees for hours and beating us, they put us in that cell. They took off my shoes, other men were almost naked or with torn clothes. There was a guy who was epileptic and lost consciousness, but the guards refused to call a doctor. They were sadists. A man had been raped with a truncheon for not unlocking his laptop and letting them see his information, others had had their teeth broken from a beating, ”says the 25-year-old young man shrinking. They couldn’t even lie down to sleep, he says, so they had to rest standing up or sitting almost on top of each other.

When Kolbanov was thrown into that cell of the Criminal Isolation Center of the main directorate of internal affairs of the city of Minsk, known as Okréstino from the street where he is located, his back and butt were already bruised from the blows of the riot police . He could barely stand upright and was constantly shaking. “They had beaten me and kicked me, insulted me… I was in shock”Says the young man, short hair, light eyes and a two-day beard. Kolbanov, who works in the hospitality industry, was walking through the center of Minsk with his friends on the night of August 10, one of the most intense days of what has already become the largest mobilizations in the history of Belarus, when he was arrested for security forces.

In Okréstino, a prison that these days has acquired the sad reputation of being one of the worst in police brutality against peaceful protesters, and where civil rights organizations have even documented cases of torture, Kolbanov and his cellmates only They fed two loaves of bread and a jug of water for the 80 prisoners in two days. “When they moved me to another room almost as small but with a roof and six wooden bunk beds for 42 people it seemed almost a luxury”, Kolbanov tries to ironically. Cell 41. He will never forget that number or the companions who shared captivity with him. He remembers that they tried to keep quiet without complaining. “We had a panic to unleash the fury of those sadists, in the cells next door they complained and the result was more blows,” he says.

The Belarusian authorities, who have never given information on Okréstino’s official capacity, remain silent about what happened behind the prison walls, which from the outside look like a spotless beige. Nor have they revealed how many of the around 7,000 people arrested during the first four days of mobilizations, in which the security forces repressed the protesters with force, went through the dismal prison, where multiple beatings and several rapes have been reported, according to the organizations. The center was in those days taken over by the special forces and units of the Belarusian intelligence service (which retains the Soviet name, KGB). And most of the usual prison staff was removed, according to prison security sources. Even the paramedics who observed the brutality in the center were part of the system.

The Belarusian human rights organization Vesna already has 450 records of ill-treatment in Okréstino and is now preparing a report focusing on torture to send to the specialized UN committee. “The crackdown on peaceful protesters is unprecedented. We have seen real brutalities. Nothing similar had happened since the Nazi occupation of Belarus ”, describes Valentin Stefanovich, a member of Vesna. Belarus, where the death penalty is still applied, has always been very high on the list of countries that suppress the opposition and violate human rights, but the stories and accounts of mistreatment and humiliation of those who have left Okréstino and others detention centers has reached another level.

And their cases fuel public anger against the Aleksandr Lukashenko Administration and continue to ignite the flame of protests, sparked when Lukashenko claimed his sixth term with 80% of the vote in a presidential election with serious evidence of fraud. There are at least four protesters killed, one of them from live ammunition. In the capital’s hospitals, where the repression was particularly virulent, the first days after the August 9 elections, 78 people were injured by rubber bullets, 38 of them in critical condition and several dozen affected by stun grenades thrown at protesters. At least 60 people face criminal charges for participating in the peaceful mobilizations.

In Okréstino, huddled with 22 other women, Katia Novikova spent the worst two nights of her life. Although she specifies that she could only find out where she was afterwards, when she had already been interned in the detention center for hours, observing crouched on the ground how the masked riot police beat and kicked the handcuffed men leaning against the bloody wall of the center’s courtyard. She was arrested in the center of Minsk on August 10 while on her way to a shopping center. Like most, the riot police also took her cell phone, forced her to unlock it and began to beat it when they saw photos of a campaign event by opposition leader Svetlana Tijanóvskaya. “They grabbed me by the neck and started hitting me on the head,” he says. “They yelled at us that if we liked the changes, they would give us changes. They threatened us: ‘I know where you live, have you learned your lesson?’ It was wild, ”he says.

The 35-year-old woman, who wears a cheerful and colorful red oriental dress, still today recovers from a concussion from the blows and says she has memory loss. “I can’t remember my mobile PIN or other simple numbers and I forget things from one day to the next,” she says nervously in a downtown cafe; A few meters away there is a police van and Novikova does not feel safe, she prefers to change premises. “I have nausea, I constantly tremble, I cannot sleep, I have nightmares and that listening to my cellmates I know that I did not get the worst of it, of the 21 that we were, only two had participated in the demonstrations …”, he says.

The riot police didn’t like a girl’s purple and green hair so they shaved her off. Several were threatened with rape. They never received menstruation sanitary products or toilet paper. “The mistreatment conditions we were in… It seemed like war. It has been so traumatic that most do not want to report it, just forget everything and try to get ahead, ”remarks Katia Novikova, who like most of those arrested was forced to sign a false confession and a protocol with incorrect and incoherent information about her participation in the protests. Some, like Vadim, say that they had to make that “confession” and regret having participated in the protests while being videotaped. Some images that worry him and that he does not know what the Lukashenko administration will use for.

On a wooden bench just a few meters from the gates of the detention center, Irina waits for some information from her son. They arrested him a couple of days ago and now they have told him that he is in Okrestino. With her clothes on and an envelope full of documents, the woman, with very short hair, has presented herself there. “It’s horrible, I’m terrified, with everything that has been known about this place, I’m afraid that they will hand him over to me dead or badly injured,” she laments, lowering her mask a little, something rare in Belarus where almost no one, except the security forces or undercover riot gear at demonstrations, wears it.

The smell of bread from a nearby bakery permeates the air and hardly any sounds can be heard from the center. Along the walls of Okréstino, crowned by barbed wire, several people wait to try to recover their belongings, seized during the arrest. Vadim is missing his mobile phone. Dmitri was never able to find his bike. Dasha has come to see if she can find the documentation of her brother, who was held there for three days. Two volunteers try to help them communicate with the Okréstino guards, who speak into the intercom in a metallic voice that offers no answers.

Like Irina, Natalia Makridenko searched for her son, Fedor, 22 for two days. Her husband, sister and she toured detention centers without getting any response, then hospitals and morgues. “It was unbearable,” he recalls through tears. “We finally learned that he was in Okréstino, but the things he has gone through there are tremendous,” he says. Fedor is recovering from a head injury. He says that the riot police had a “routine” to beat them up and that when they had to move them from one place to another they forced them to pass a corridor made up of masked policemen and beat them. They were forced to sing the national anthem to shout “I love OMON [los antidisturbios]… “That is torture, it is too reminiscent of the communist troikas and the NKVD purges in the 1930s,” says Makridenko.

Georgi’s family also spent the three days that the young man was imprisoned without hearing from him and living with his soul in a fist. In cell 41, a guy who had been imprisoned more times in Okréstino and who illustrated to the rest about the place where they were found a piece of paper hidden in the wall by some other inmate with information about the guards and their shifts that no longer it was useful to them. They used it to write their home telephones with a burnt wooden stick. “The first one to come out had to call the families and report, like when you are kidnapped in the movies. Only now it was real. Too real, ”says Kolbanov.

The Belarusian authorities are now trying to erase the evidence of ill-treatment in Okrestino. Some of those who were imprisoned there have no documentation of their time in prison. And when protests against police brutality raged, the security forces put dozens of detainees in their vans and released them at different points on the outskirts of Minsk, totally disoriented, so that no one could prove where they had been, explains Igor Govoren , 53-year-old volunteer. “The volunteers were chasing those vans by car to try to see where they were taking the detainees and they were shooting rubber bullets at us,” says Govorem, one of the hundreds of people who showed up at the gates of Okréstino to help the prisoners and their families. “The security forces have been totally chaotic and disorganized. I think they were trying to show that they are the ones who have the power, “explains Govoren, who points out that in addition to mistreatment and possible conviction for participating in” unauthorized demonstrations, “most of the detainees have to pay the equivalent of five dollars to the day for living expenses in the detention center. And he adds: “Paying for being mistreated is the height of shame.”