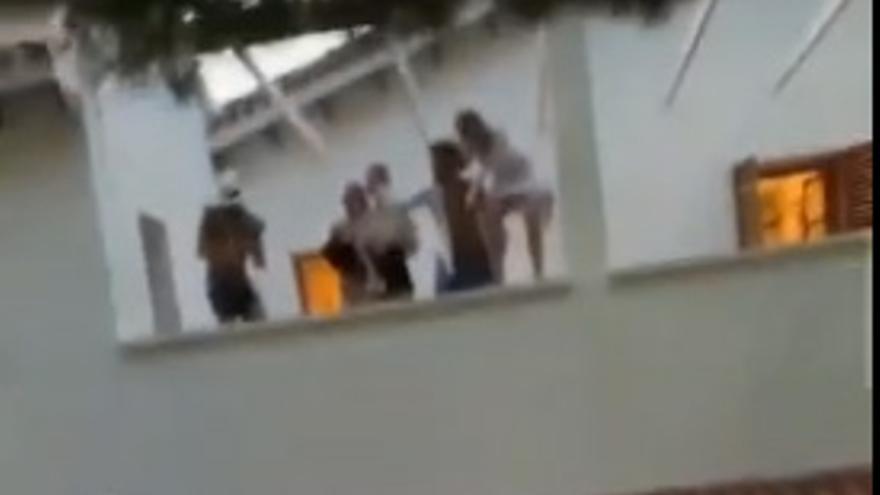 Although, as the organizer of an illegal party in the midst of a pandemic, it can lead to a € 60,000 fine, the young “party mounter” seems to care little since it is reiterative to continue mounting them and, according to police sources, He never collaborates with the agents who come to the homes where he organizes these massive events. Quite the opposite. “He laughs, he does not care, and does not allow entry”According to the same sources, who resign themselves to explaining that the police have no choice but to wait at the door for the young “partygoers” to decide that it has been enough and leave, at which point they take the opportunity to impose the relevant sanctions. “Without a court order we cannot enter a home”, indicate and do not hesitate to qualify the young man from “professional party planner”.

The last party he has organized, last weekend in a rented chalet in Saint Fulgencio, brought together fifty young people from various parts of the country, from Marbella to Almansa, València or Castellón. There were many more guests, but they turned around when they saw the controls installed by the Local Police of San Fulgencio and the Guardia CiviAt the entrance to the Oasis urbanization, where the young man, from a wealthy family, had rented a spacious single-family home in the Lo Grané sector. Were the neighbors who alerted the Police for the music to great volume, voices and chants that they listened to in that house. A patrol of the San Fulgencio Local Police traveled there to try to identify the attendees and dissolve the illegal party. Nevertheless, the organizer’s refusal, who had rented the house all weekend, to which the agents could access and to collaborate, prevented them from ending the noisy event.

The night shift agents of the local police force, in collaboration with the Civil Guard, then installed controls at the entrances to the urbanization to identify all those who traveled with their vehicles, most of them high-end, to the rented villa where they were he had organized the night party. In this way, the agents carried out 30 acts for infringement of the protection measures established by the Generalitat Valenciana in prevention against Covid-19, such as perimeter confinement and curfew, in addition to other 42 complaints for violating the Ordinance of Citizen Coexistence, lack of consideration to the agents, refusal to identify themselves, disobedience to the police and disturbing the rest of the neighbors. Many of the guests at the party turned around when they saw the police controls and warned by those who had stopped them, so it was expected that many more young people would attend it.

All those identified are between 19 and 38 years old and high purchasing power. The agents of the Local Police, in two shifts (that of the early morning from Saturday to Sunday and Sunday morning), and those of the Civil Guard, they waited patiently at the door of the chalet for them to come out each and every one of those who attended the party, who did not hesitate to address in a tone challenging to the cops. The illegal party goers provoked numerous destruction in the villa that the young man from Novelda rented for 1,000 euros all weekend, plus a 500 deposit, which according to how the property was left, the owner will not return. “In addition to the damage to furniture and sofas, they left everything very dirty, with all the signs of having organized a party in style“, police sources explain to this newspaper.

The young “party rider” is a repeat offender. It has at least three other complaints in Novelda, where he resides, for organizing parties. “As they already have it very deep there, they are renting houses in other towns in the province to organize those festivals that people from all over Spain attend,” the same sources say. In June of last year, as soon as the country entered phase 3 of de-escalation, organized a macro-party with 200 people in his chalet in the rural area of ​​La Serreta de Novelda, which he inherited from his grandparents, businessman Francisco Berasaluce and his wife Susanne Brensing, owners of a marble company, and who were murdered in 2010 precisely on that farm by a gang of Romanian thieves who entered the house to rob that they took 120,000 euros.

The video of that party, in which he charged entrance to access, was circulating on social networks in which many young people can be seen dancing even on the rooftops and without security measures due to the covid or social distancing. In that case, it was a joint action by the Autonomous Police Station of Elche and the Local Police of Novelda that allowed detecting its celebration and, as has happened in the rest of the events that it has organized and that have “caught” it, The organizer denied the agents entry for which he was denounced for allegedly preventing the inspection work of the agents of the authority.

The Police reiterate the importance of citizen collaboration to stop this type of irresponsible and dangerous acts due to the risk that they may create outbreaks of Covid-19 contagion. From the Local Police of San Fulgencio they point out that “we will not rest in the effort to avoid, dissolve and, where appropriate, sanction both administratively and judicially, acts such as the one that has occurred in our population. “This police force is carrying out various controls at night, especially on weekends, to prevent a few from ending the struggle of many against the coronavirus.