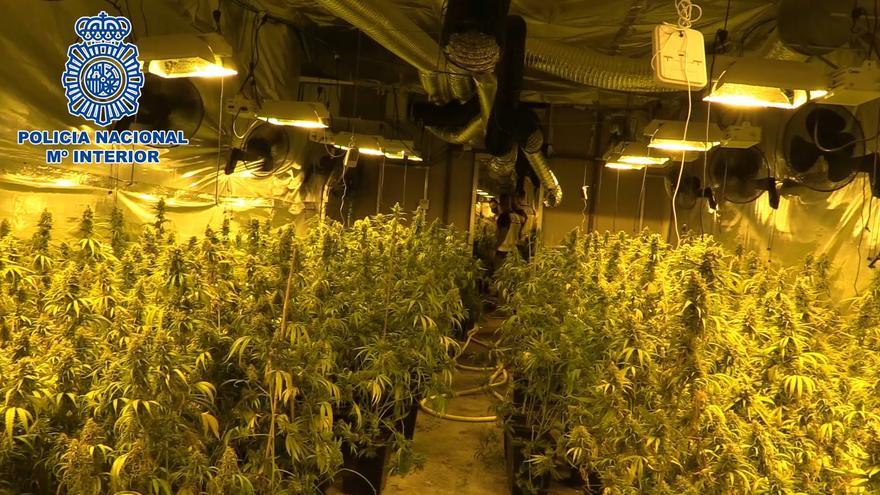 Agents have seized a total of nine plantations, 10,000 plants, 100 kilograms of buds and another 600 kilograms of marijuana that was being prepared, the Police reported this Saturday in a statement.

The police investigations began in July 2020, when the agents received information about a group of Spanish people who managed several marijuana plantations that, later, sold wholesale and retail to others dedicated to their culture.

The first surveillance allowed to verify that the investigated maintained a culture of campuses at the single-family home where he lived, in Chiva (Valencia). In addition, he kept appointments in the surroundings of the area with third parties, to whom he provided large cardboard boxes where, apparently, he delivered the cuttings.

As a result of these surveillance, one of these transactions was detected in a villa located in a Valencian municipality, where a marijuana plantation managed by a person of Lithuanian origin was located and dismantled. It had 460 floors, with a total weight greater than 70 kilograms.

The Court of Instruction 4 of Requena assumed the investigation, and it acted in two ways: to increase knowledge about the organization to proceed with its dismantling and to detect the plantations of third parties to act against them.

In the first case, the investigation made it possible to verify that the person in charge maintained a plantation in the home where he lived with his mother, but also managed plantations in houses of several relatives.

In addition, it established another production center in a warehouse located in the Alaquàs Industrial Park (Valencia), that it was directed by two men, who acted as men of confidence of the maximum person in charge.

Despite the first arrests, the head of state continued his work, and at the same time nurtured third parties from campuses. One of these purchases made it possible to detect a chalet controlled by Lithuanians in a luxury urbanization in Boadilla del Monte (Madrid).

This plantation was dismantled, and two Lithuanians were arrested inside the chalet, who were intervened 1,600 plants, 128 kilograms of marijuana in buds ready for packaging, 2,000 euros in cash and various materials that covered the plantation.

Thanks to the investigation, it was found that the chief executive officer also acted as an intermediary in marijuana purchase and sale transactions and, in addition, had partnered with two people related to a dealership located in Quart de Poblet (Valencia) to install a marijuana plantation.

Likewise, it acted as an intermediary for third parties that were engaged in the acquisition of marijuana, and one of these transactions ended the arrest of two people, of Polish origin, who, at the time of the police intervention, carried about ten kilograms of marijuana buds.

This sale was managed through three people residing in Liria (Valencia) and La Vall d´Uixó (Castellón) who acquired the schools from the main organization and, after grow, collect and dry marijuana, They sold it, through the head of the company, who acted as an intermediary. The ultimate customers were the two Polish guys.

Then it was dismantled another of the plantations to which the organization had provided the facilities, which was located in the province of Valencia and guarded by a 55-year-old male, a relative of one of its owners.

Both were arrested, and seized 3,535 plants, which shed a total weight of about 150 kilos.

Finally, the agents detected that the main investigated, According to two other people, he had started to harvest the harvest from the plantation that had been established at the concessionaire, which precipitated the police intervention.

Several searches were carried out simultaneously, specifically two in Chiva, one in Alaquàs, one in Torrent, two in Valencia and one in Quart de Poblet.

The Quart de Poblet plantation was installed on the roof of the building annexed to the concessionaire, which was accessed through an installed door that it was opened through a mobile phone application.

The plantation had several rooms to be used as planting, drying and packaging center, with about 700 plants in the flowering process. This plantation was so well hidden that it did not interfere with the normal activity of the concessionaire.

In this last phase of the investigation, the main organization was completely dismantled, proceeding to the detention of 17 people, of which five are direct relatives of the person in charge.

Seven of the detainees were placed at the disposal of the court, which decreed the entry into prison of all of them.

With this operation, it has been possible to identify and dismantle the entire marijuana production and cultivation chainto. The investigation remains open and new arrests are not ruled out, according to the same sources.