PROGRAMMING NOTE — President JOE BIDEN’s speech, where he’s expected to outline sanctions against Russia for the Ukraine invasion, has been pushed back to 1:30 p.m. The sanctions are expected to be major but will omit the Russian energy giant Rosneft over fears of disrupting energy markets too severely — they’ll focus on financial institutions instead, Alexander Ward, Betsy Woodruff Swan and Ben Lefebvre just reported. A senior administration official told the trio: “No option is off the table,” but “starting out with energy could actually benefit [Russian President VLADIMIR] PUTIN and pad his pockets.”

SIREN I — House Armed Services Chair ADAM SMITH (D-Wash.) on CNN this morning: “There’s no reason to believe that Putin is going to stop at Ukraine.”

U.K. SANCTIONS — British PM BORIS JOHNSON announced the “largest ever” sanctions against Russia this morning, zeroing in on at least 10 different measures, including freezing the assets of all major Russian banks. More from The Guardian

GOING BEYOND SANCTIONS? — Decisions haven’t been made yet, but Biden has been presented with a suite of options for massive cyberattacks that could hobble Russia’s military capabilities in Ukraine, NBC’s Ken Dilanian and Courtney Kube report. Officials are divided over whether such a step, which would likely never be publicly acknowledged, is a valuable move or an ill-advised escalation. These would be “cyber weapons on a scale never before contemplated. Among the options: Disrupting internet connectivity across Russia, shutting off electric power, and tampering with railroad switches to hamper Russia’s ability to re-supply its forces.”

THE LATEST REACTION IN THE WEST …

— Biden and VP KAMALA HARRIS led an NSC meeting in the Situation Room this morning, per the White House. (Here’s a photo.) Chris Cadelago reports that the two pillars of Biden’s foreign policy doctrine — (1) that democracies must triumph over autocracies and (2) that he would restore the world order turned on its head — “are under the most intense assault to date.”

— The Pentagon now says it believes Russia intends to “decapitate” Ukraine’s government and replace it with its own leaders. Most Russian troops are still yet to enter Ukraine, as we’re just seeing the “initial phase” so far, Pentagon officials assessed at a briefing this morning. The U.S. has also deployed F-35As to Estonia, Lithuania and Romania, the Pentagon said. More from Bryan Bender

— But defense officials said they did not see “an increased threat” that Russia will use nuclear weapons.

— In the markets, investors “pushed down stocks and lifted the prices of oil, gold and government bonds,” report WSJ’s Anna Hirtenstein, Caitlin Ostroff and Hardika Singh. “The Dow Jones Industrial Average fell about 720 points, or 2.1%, on course to close in correction territory. The S&P 500 dropped 1.4%; it reached correction territory earlier in the week.”

A message from Amazon:

Chatonn got a raise when she chose to join Amazon, where starting wages are at least $15 an hour. A bigger paycheck boosted her buying power and allowed her to afford art supplies for her daughter and karate classes for her son. “Amazon allows me to be the parent I want to be,” she said. “That is everything to me.”

THE LATEST ON THE GROUND — Mass migration seemed to be underway today in Ukraine as people scrambled to head west amid widespread reports of attacks and explosions. Watch CNN’s Clarissa Ward interviewing people inside a Kharkiv subway station-turned-bomb shelter

— Russia has captured the Chernobyl nuclear plant,per Reuters. Earlier in the day, Ukrainian President VOLODYMYR ZELENSKYY tweeted that Ukraine’s defenders “are giving their lives so that the tragedy of 1986 will not be repeated.” AP’s Yuras Karmanau, Jim Heintz, Vladimir Isachenkov and Dasha Litvinova note: “The exploded reactor has been covered by a protective shelter to prevent radiation leak and the entire plant has been decommissioned.”

— More than 40 Ukrainian soldiers were killed in Russian attacks, officials said, and dozens of civilians died as of earlier this morning. More from CNN

— Russia has attacked civilian hospitals, according to Ukraine’s ambassador to the U.S.

— Russian helicopters bombarded the airport in Hostomel on the outskirts of the capital — “the most intense fighting seen so far near” Kyiv, per the NYT.

— Independent minders are telling reporters that dozens of Russians have been detained for participating in anti-war protests in the country. Moscow Times reports, “The police-monitoring website OVD-Info has reported nearly 100 detentions in Moscow, St. Petersburg and other Russian cities for staging solo anti-war pickets.”

THE STEP BACK — Bloomberg’s Alberto Nardelli, Jennifer Jacobs and Kitty Donaldson are up with a fascinating story about how U.S. intelligence got basically everything right over the past few months about Russia’s invasion plans, preempting (though not preventing) the burgeoning war with “a real-time chronicle of an invasion foretold.” The rare public pronouncements had the effect of “robbing [Putin] of the element of surprise” and “rally[ing] support from its allies on sanctions that in normal circumstances would have taken months to hash out.”

THE NEW GOP — Georgia Secretary of State BRAD RAFFENSPERGER faces a tough primary from the GOP’s Trumpist wing over his refusal to overturn the 2020 election — and he’s taking a media tour deep into conservative MAGA world to try to shore up his standing, reports Zach Montellaro. “While Raffensperger isn’t flip-flopping on [DONALD] TRUMP, he needs to reingratiate himself with the base that may be more open to his support for voter ID laws and other GOP election policies ahead of Georgia’s primaries.”

AND A BIT OF THE OLD GOP — In Utah, perhaps the deep-red state least amenable to Trump-style politics, GOP Sen. MIKE LEE is facing a stiff pair of primary challenges predicated on the incumbent getting too close to the former president, Samuel Benson reports. Comparing Trump to a holy Mormon prophet in 2020 rubbed many Utahns the wrong way. Still, Lee leads by a wide margin in the early polling, and his two main competitors could split the vote against them if neither drops out.

DEEP IN THE HEART — There’s a high-profile battle for the GOP nomination for Texas A.G. ahead of the March 1 primary, as Trump-endorsed incumbent KEN PAXTON faces off against GEORGE P. BUSH, EVA GUZMAN and Rep. LOUIE GOHMERT. But “the sense among conservative strategists and consultants here is that this firework race has sort of fizzled out,” Renuka Rayasam reports in POLITICO Magazine.

You might expect that such a diverse field of candidates would represent the full spectrum of today’s Republican Party — and in a sense, they do, writes Renuka: They reflect a party whose concerns are dominated by the “pro-Trump wing of the party, and they don’t differ on the key points.” Why that matters: The Texas A.G.’s office is seen as a springboard for bigger things (past occupants include Gov. GREG ABBOTT and Sen. JOHN CORNYN) and a flag-carrier for Republicanism in America’s largest red state. But if that’s the case, “the face of GOP politics currently looks a lot more like careful triangulation [among Trump-ian conservatives] than traditional Texas swagger.”

SPEAKING OF THE TEXAS PRIMARIES — Texas Republicans’ redistricting maps are being challenged in court, and one expert tells WaPo’s Harry Stevens there’s a decent chance they’ll be overturned. But it won’t go to trial for months, and the primary’s next week — so it looks like an entire cycle will pass under legally disputed boundaries.

MCCARTHY’S TWO-STEP — NYT’s Annie Karni and Jonathan Weisman have a big look at House Minority Leader KEVIN MCCARTHY’s contortions as he tries to wrangle his party’s various factions with an eye on the speakership. Among the new details: McCarthy told donors in his district last week that he has to accommodate the GOP’s extremist fringe members because they represent what much of the base wants. In “catering to a group that may ultimately be his undoing,” they write, “he has both empowered the hard-right fringe and tethered his fate to it, helping to solidify its dominance in today’s Republican Party.”

CLIMATE FILES — Josh Siegel examines a fascinating development in Congress: Trump so softened the Republican Party to using tariffs aggressively that there’s now bipartisan momentum toward implementing climate-focused protectionism. Border carbon adjustment fees would penalize foreign goods from countries with high emissions, and everyone from the AFL-CIO to Sen. LINDSEY GRAHAM (R-S.C.) is interested. “But one area where Democrats and Republicans diverge on the issue is climate advocates’ desire to pair any tariff or fee on imported goods with a corresponding domestic carbon price.”

INFRASTRUCTURE YEAR — Could one of Biden’s biggest challenges imperil one of his biggest accomplishments? As inflation charges on, higher prices could end up reducing the number and the ambition of infrastructure projects that get completed with funding from the bipartisan infrastructure law, reports WSJ’s Andrew Duehren. Labor challenges also loom large. “If prices continue to rise, officials may prefer projects with shorter timelines—and therefore more certain costs—or projects that rely less on volatile commodities such as steel.”

A message from Amazon: 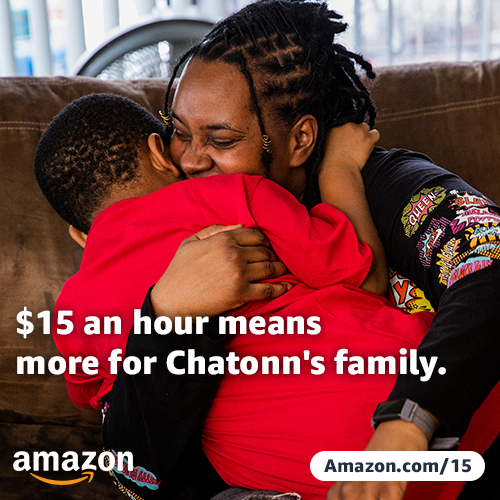 THE NEXT PHASE — The White House has started working on a new strategy to handle the post-crisis (for now!) era of the Covid-19 pandemic, working on “a sweeping overhaul” that will take into account the reduced threat to most Americans, ABC’s Anne Flaherty scooped. Officials also met Monday to “game out the various paths the virus could take to ensure the government is prepared.” It’s not yet clear when the administration will announce the new strategy.

MEGATREND — The share of abortions completed with pills rather than surgically in America jumped from 44% in 2019 to 54% in 2020, according to new Guttmacher Institute data released today, the first time that medication abortions have accounted for a majority, AP’s Lindsey Tanner reports. The trend was hastened by a rise in telemedicine during the pandemic — and, of course, has political implications as Roe v. Wade hangs in the balance at the Supreme Court.

SCOTUS TEA LEAVES — Katie Barlow notes that a D.C. Circuit panel that includes Judge KETANJI BROWN JACKSON released an opinion today, though it usually puts them out on Tuesdays and Fridays. There’s a chance that could signal good things for Jackson, given recent history: Right before BRETT KAVANAUGH was nominated, the court published an off-day opinion.

WHAT JARED IS UP TO — The Middle East peace accords JARED KUSHNER helped broker during the Trump administration are now a source of profit for him, as his firm pitches officials and financiers on “investment opportunities” he worked to secure in government, WSJ’s Stephen Kalin, Summer Said and Dion Nissenbaum report. His moves don’t violate U.S. laws. But one ethics expert told the WSJ that they “represented an ethically questionable use of public office for private gain.”

JAN. 6 AND ITS AFTERMATH

BOOK CLUB — Celadon Books and The New Yorker announced today that they will publish the House Jan. 6 committee’s report as a paperback book and e-book as soon as it arrives, with an introduction from DAVID REMNICK.

MEDIA MOVE — Svetlana Shkolnikova is now a congressional reporter for Stars and Stripes. She previously was a congressional fellow with the American Political Science Association working for the House Foreign Affairs Committee and a reporter at the Record in New Jersey.

WE VALUE YOUR OPINION: Please take a 1-minute survey about one of our advertising partners.