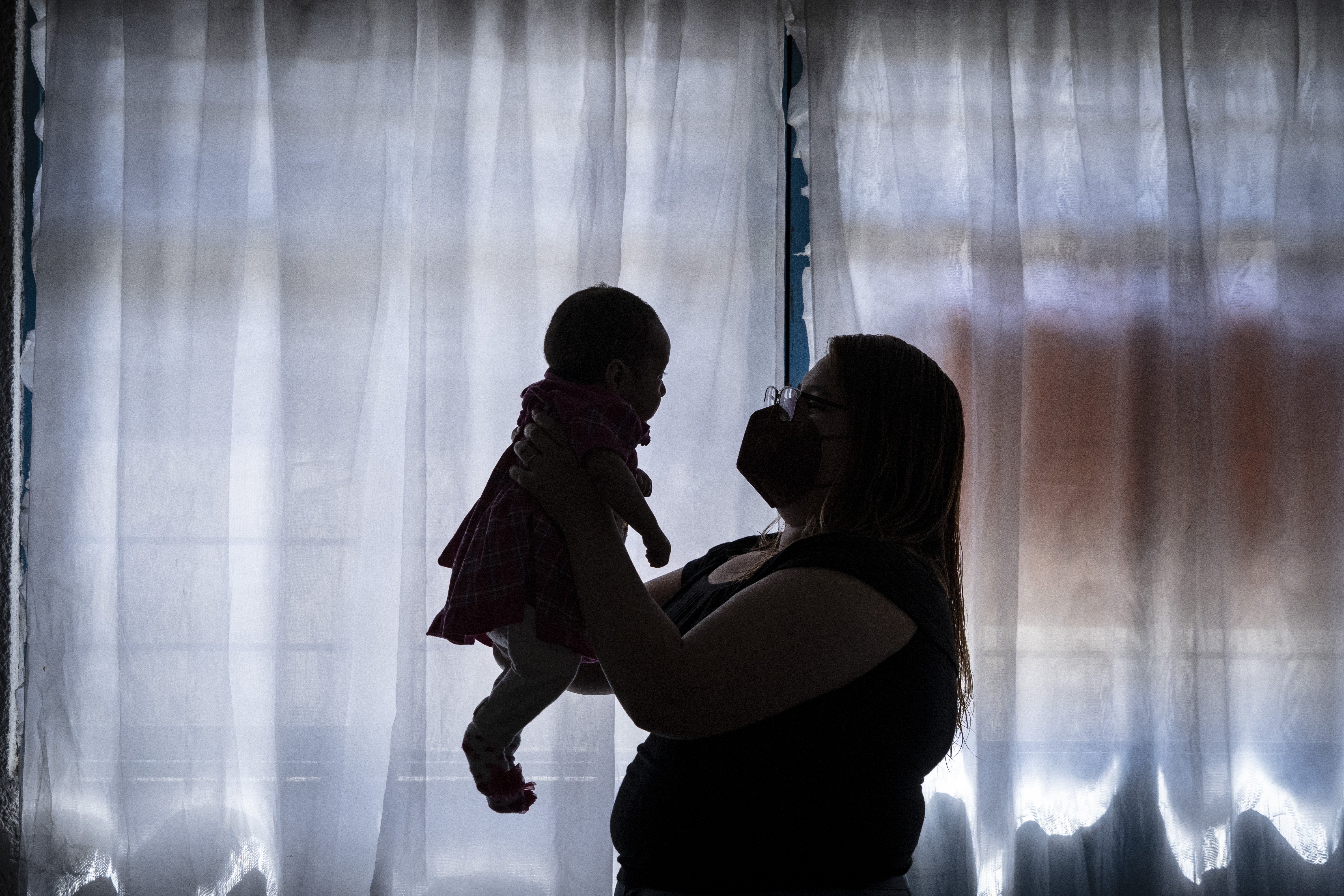 Daniela Saucedo believed that fatigue and back pain were discomforts due to her last weeks of pregnancy. The teacher at a private school in Monclova, Coahuila, discovered that she was expecting her third daughter at the end of April. On the calendar he already had the scheduled date of his delivery: January 12. But the coronavirus disrupted all the family’s plans. In a matter of hours, what seemed like a severe cold turned into an emergency cesarean section, oxygen masks and intubation, and thus, eight days after giving birth, Daniela lost the battle against the disease. Like her, 281 pregnant women have died from the virus since the pandemic began in Mexico.

Daniela, 30, entered clinic 7 of the Mexican Social Security Institute (IMSS) on her own feet on December 27. Three days later, the doctors decided to perform an emergency cesarean section, the only way to try to save her and her baby. His relatives, who by then also had symptoms of covid, were forced to follow the progress of his disease from a distance, through brief WhatsApp messages. Karina Saucedo, Daniela’s twin sister, remembers with her tattered voice the courage with which her sister fought for her life and that of her daughter. “They were days of great anguish, of much prayer, it was a great fear for the lives of both of them,” she says. The baby was born at dawn on December 30 and although her vital signs were stable, she should continue to be observed and awaited confirmation of her coronavirus test.

In the maternal area, before being transferred to the covid area, Daniela was able to hold the newborn in her arms for a few moments. Already in the reddest zone of contagion, on January 1, thanks to a nurse’s cell phone, he was able to make a video call with his other two children, ages five and three. “My sister was always very positive and with immense faith, her face was heartbreaking because she looked pale, she looked bad. But she tried to take off her mask to talk, ”says Karina about this last contact that Daniela had with her children.

Despite the cocktail of medications and the supply of oxygen, her oxygenation level plummeted, leaving intubation as the only alternative. “The only thing he asked the doctors was that they put him on a radio or a cell phone with Christian music, because in his faith was the idea that he was going to get ahead and that it was going to be God’s decision,” describes Karina. The Saucedo family and many others prayed for a miracle. However, after just over 24 hours of being intubated, Daniela passed away, leaving her husband, her three children and the rest of her family in deep pain.

The word covid-19 is not enough to explain his death or give comfort to the Saucedo family. “We do not know if it was really because (in the hospital) they did not have the conditions, I would like to understand, I would like to have those answers, they will not take away the pain, but they would help us understand a little,” says Karina. A little over a month after her death, sadness is still present, but also her legacy of love: “She was an excellent mother and those days she felt bad, her back hurt so much, she coughed so much, even though She told her to stay in bed, she wanted to make the children breakfast, with that I stay, with the dedication she had for her children, ”her sister recalls tearfully.

Daniela was one of the 61 women who died during the month of January due to covid-19 in Mexico. Since the health emergency began to date, at least 281 pregnant women have died from covid and 53 more deaths are suspected of the virus, according to statistics from the Ministry of Health. In 2020, the coronavirus was the leading cause of maternal mortality in the country with 202 confirmed cases and 46 suspected cases out of a total of 934 deaths, surpassing other causes such as hypertensive disorders and bleeding. With these figures, the maternal mortality ratio in the country stood at 46.6 deaths of pregnant women for every 100,000 births at the end of last year, one of the highest rates in Latin America.

Hilda Eugenia Argüello, technical secretary of the Maternal Mortality Observatory, explains that at the beginning of the pandemic, maternal mortality was recorded more in the third trimester of pregnancy, “but at the end of 2020 this face began to change and now those that are most dying are occurring more in the puerperium, that is, when they have already given birth and are 42 days after pregnancy ”. In addition to the virus, the specialist points out that the reconversion of hospitals to attend the pandemic and the desertion of doctors and specialists have had an impact on the degree of care for births and obstetric emergencies. The observation of the spokesperson for the Observatory is confirmed in the statistics: maternal deaths rose 34% in 2020 compared to the previous year, going from 695 to 934.

“It hurt to breathe, but I thought it was because of my baby”

Given the escalation of deaths and cases of coronavirus on January 28, the Ministry of Health issued an epidemiological warning for health personnel to reinforce care for pregnant women. The director general of Epidemiology, José Luis Alomía, recognized an increase in deaths and unpublished cases for this group of the population during January and confirmed that 10,504 pregnant women in Mexico had tested positive for coronavirus in 2020.

One of these contagions was that of Brenda Betancourt, who during the eighth month of gestation of her first daughter began to perceive the signs of the disease. “I felt a very strong pain in my throat and as on October 2, I already started to give a fever and I no longer slept, but since I did not have a thermometer because it did not measure my temperature, I just felt very cold, and then it hurt to breathe But I thought it was because of my baby, ”says the 22-year-old woman.

On October 4, he went to the maternal hospital and, still without confirming the result of his test, it was decided to transfer him to hospital 72 of the IMSS, in the municipality of Tlanepantla, State of Mexico. Immediately after his admission, a series of ultrasounds and x-rays began, which revealed a first diagnosis of pneumonia.

“On October 8, I noticed that my baby no longer moved as much. The doctor made a face that scared me more, she left for a few minutes and when she came back she told me that my baby had fetal distress with tachycardia. They tell me they have to do an emergency cesarean section. They only gave me the opportunity to talk to my husband and just when I was about to go into the operating room they confirmed that my test came out positive, ”she says.

Despite the anguish, anesthesia and suffocation from the masks she wore during labor, Brenda clearly remembers telling the doctor that if at any time she had to decide between her life and that of her daughter, she would choose her baby. For this reason it was a relief to hear her crying in the operating room, although due to the risk of contagion, he was not allowed to hug her. Mother and daughter fought for their lives on different floors of the same hospital.

Contrary to her premature daughter who was gaining weight and strength in her vital organs day by day, Brenda’s health was deteriorating, an unequivocal sign that the virus was gaining ground. “I felt that I was going to die, that I could no longer bear it. One day, I think it was about October 12, I was able to mark my mother at dawn and together we began to pray ”. Added to the fever and lack of oxygenation was the anguish of thinking that she would die without seeing her daughter. “I was very afraid, afraid because I brought a baby into the world and who was going to take care of him, I knew that my mother was going to take care of him, but I was not going to be there, I wanted to be there for her, I wanted to see her grow up,” she says between sobs.

Brenda does not know if it was the medicines, the prayers of her family or the desire to meet her daughter that saved her life after a 19-day agony. And a week after her discharge, on October 28, she and her husband went to pick up the baby from the hospital. “I felt a lot of emotion, because just as she fought to be with me, I fought to be with her, when I saw her all hope came back to me,” he concludes.