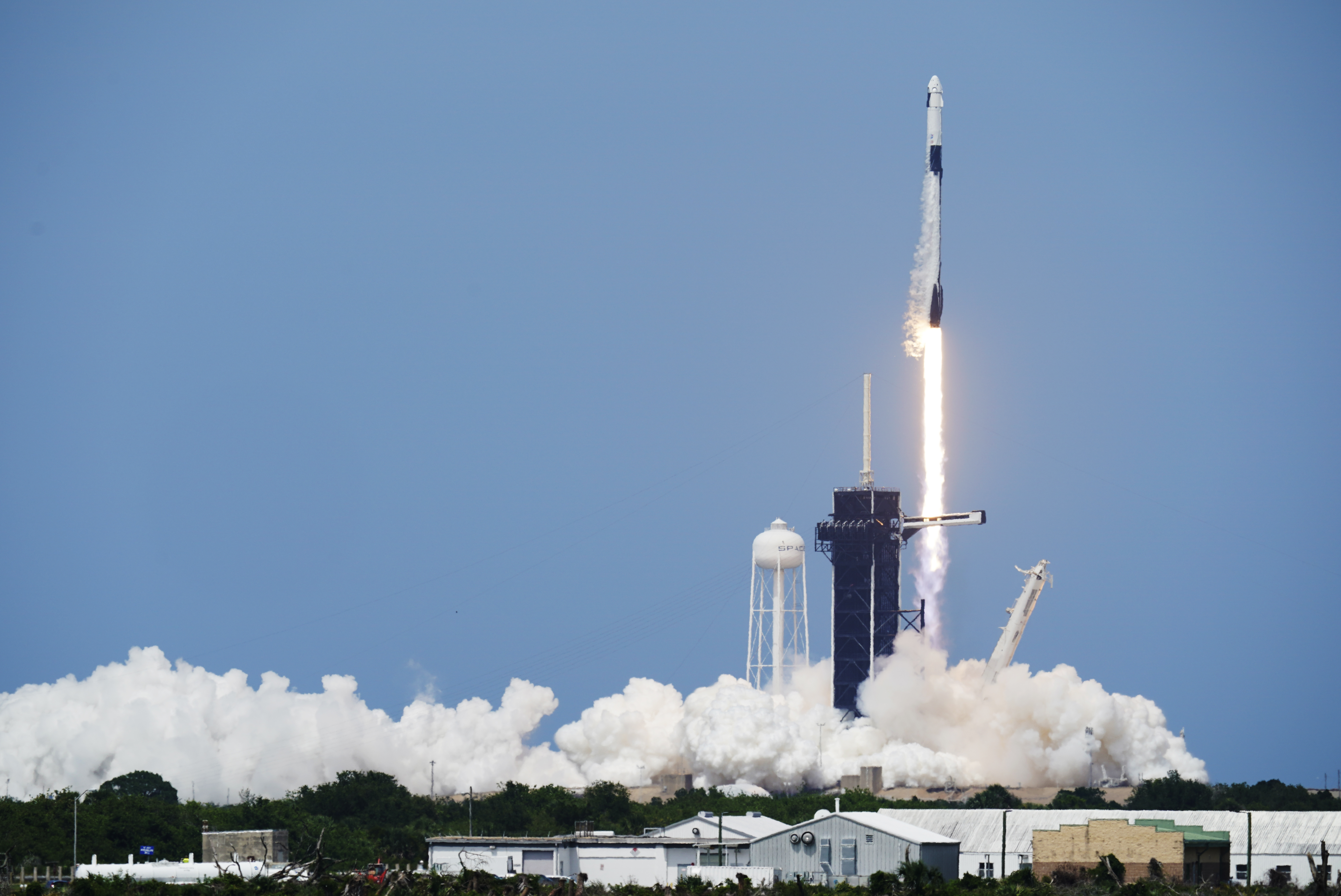 Mice, quail, freshwater minnows, cockroaches, moths, and flies. This was the selection of animals to which NASA supplied powdered Moon rock in 1969, intravenously for the mice, and in food for the rest. The Apolo XI returned to Earth with samples from our satellite. Its three astronauts were quarantined for three weeks and their valuable cargo was tested for months. For what? To ensure that the first alien materials collected by humans would not contaminate the Earth.

Planetary protection. It is the technical name for the protocols for the prevention of biological contamination in the solar system, the one that humans can cause in other celestial bodies and the one that we can bring to Earth on return missions. Planetary protection levels were established in 1958, a year after the flight of the first Soviet satellite. Sputnik, with the creation of the Committee for Space Exploration (COSPAR), an office under the International Council of Science. The CSIC is the Spanish representative in COSPAR.

The National Space Council (NSC), an organ of the White House, released a document last December in which it laid the foundations for a substantial change in planetary protection: this responsibility should no longer be only NASA but the Government, and with “a key role [de coordinación] of the Department of Health ”. The NSC warned that procedures to avoid damaging Earth and other planets have changed little since the Apollo missions, more than fifty years ago. “Given the rapid growth in capacity and activity in the private sector, it is highly likely that US companies will be key players in the search for life [extraterrestre]”, Affirms the NSC,” however, the approval and supervision processes of the private missions are not clear regarding planetary protection.

Last October, the Institute for Defense Analysis (IDA), a think tank close to the US government, published a report warning of the vulnerabilities generated by the private sector, and gave the Israeli mission as an example Beresheet, of the millionaire Nova Spivack, which in 2019 crashed on the Moon carrying thousands of copies of tardigrades, a microscopic animal and one of the most resistant living beings known, on Earth and in space, according to experiments carried out.

The main concern is that human contamination will alter the results of experiments on Mars that seek to elucidate whether there is life on the red planet.

Space X, Elon Musk’s aerospace company, is the leading private player in the space race. In addition to the success of its reusable launch and navigation units, Space X is developing a new spacecraft that can reach Mars and return to Earth, with the aim of making the first trip in 2024. The Virgin Galactic company has also commented on its interest in developing projects on the red planet. There are currently six human units on Mars, including probes that orbit the planet, landers – the descent modules and analysis taking – and the robot Curiosity on its surface. It is estimated that this February three new missions will reach Mars: the Chinese Tianwen-1, the Saudi probe Hope and the new NASA vehicle Perseverance. The most ambitious immediate Martian project is led by the European Space Agency (ESA): in collaboration with the Russian agency, Roscosmos, the first mission that must return to Earth with samples taken from the planet is scheduled to take off in 2022.

Both the European Commission and the ESA have ruled out assessing for EL PAÍS whether the European powers in planetary protection should continue to be a responsibility of the agency or if the Commission should take action on the matter. The COSPAR panel of experts on planetary protection explains to this newspaper that its protocols are the international standard, but are not legally binding. Responsibility for the action of private companies in space, COSPAR specifies, is governed by Article VI of the United Nations Outer Space Treaty. This document, approved in 1967 and signed by 110 states, stipulates that “non-governmental entities” must comply with the treaty, and that its application must be regulated by the Government of the country where they operate. Article IX specifies that States “shall proceed to the exploration of the Moon and other celestial bodies in such a way that no harmful pollution or unfavorable changes in the Earth’s environment are produced as a consequence of the introduction of extraterrestrial matter.”

COSPAR notes that the main space agencies – NASA, ESA and the German and French agencies, Roscosmos, the Chinese CNSA and the Japanese JAXA – comply with “comprehensive cleaning and sterilization” protocols. Categories I and II are the least demanding and focus on missions where a serious threat of contamination has been ruled out. Categories III and IV apply to spacecraft that orbit or approach celestial bodies where life is believed to exist or has existed: this requires studies on the possibilities of impact with the surface, of the potential biological contamination of the places where it occurs. carry out the tests, assembly and testing of the parts in sanitized laboratories and the sterilization of the equipment that touches the ground. Category V, the highest, is designed for missions to return to Earth with material extracted from celestial bodies in which organic elements could be found. At this level, the isolation of the extraterrestrial samples, of the parties that have manipulated these samples and detailed plans to guarantee that the spacecraft will not crash when entering the Earth’s atmosphere is forced. In addition, all non-sterile material will need to undergo extensive testing in isolation.

What are the dangers of interplanetary pollution? Víctor Parro, researcher at the CSIC Astrobiology Center, points out that if life is found on Mars, “the greater probability is that they are organisms in the subsoil, bacteria capable of reproducing without oxygen, with little water, feeding on salts and iron as a source. of energy ”. The risk that these bacteria cause a catastrophe on Earth is a science fiction hypothesis, according to Parro’s account: potential Martian bacteria would be adapted to the extreme environment of their planet and introduction to Earth would surely end them, although He concedes that there are regions of our planet with extreme conditions similar to those of Mars.

Parro also indicates that the cross contamination probably already occurred between 4,000 and 1,600 million years ago, when both planets received multitudes of asteroids from each other. This CSIC scientist adds that the isolation measures of the material arriving from Mars may be sufficient to eliminate potential threats.

COSPAR and the space agencies consider that the risk of extracting samples from the Moon or from asteroids where “there is no evidence of chemical and / or life evolution” is minimal, such as those that arrived on Earth last December with the Japanese spacecraft. Hayabusa-2 from the asteroid Ryugu. But NASA, through an independent advisory committee, conceded in 2019 that total safety is impossible on Category V missions, which will arrive from Mars. Parro corroborates this and warns of the absurd cost of missions that can be achieved if planetary protection becomes an obsession. “From the missions Viking loving You [1975] The procedure of eliminating microorganisms is followed by subjecting the material in ovens to high temperature for days. With that you get a lot. It would be like when you pasteurize a yogurt, you do not eliminate all the microorganisms, but you do eliminate enough to eat them ”.

Earth contamination on Mars may be more likely, according to various studies, which indicate that life forms such as spores, seeds, larvae and eggs can survive outside of a spacecraft making the trip to Mars. “Microbiologists are very clear about it”, explains Andrea Butturini, professor of biogeochemistry at the University of Barcelona, ​​“no one is going to put limits on the adaptation capacities of prokaryotes [organismos unicelulares como bacteria y archeas]. Some of these organisms are tolerant to extreme conditions of pH, temperature, heat, vacuum, dehydration, lack of nutrients and also very high doses of ionizing radiation ”. Butturini points out that these Extremophilic organisms have adapted to extreme environments, but under certain conditions that, if they vary sharply, they can die. “Perhaps they may be more appropriate [para llegar a Marte] common and omnipresent microorganisms with some remarkable tolerance “, says Butturini:” It cannot be ruled out that the architecture of these spaceships allows the existence of sheltered corners from such brutal and oscillating environmental oscillations. “

The main concern is that human contamination will alter the results of experiments on Mars that seek to elucidate whether there is life on the red planet. But even so, Parro adds, DNA analysis of the samples taken could determine if the organic material obtained is of terrestrial origin. Parro warns of an excess of zeal in protecting Mars: “Once we set foot there, it no longer makes sense. And a hundred or two hundred years from now, when humans visit the planet with some fluidity, the mix will be inevitable. In fact, life is just that, mix ”.