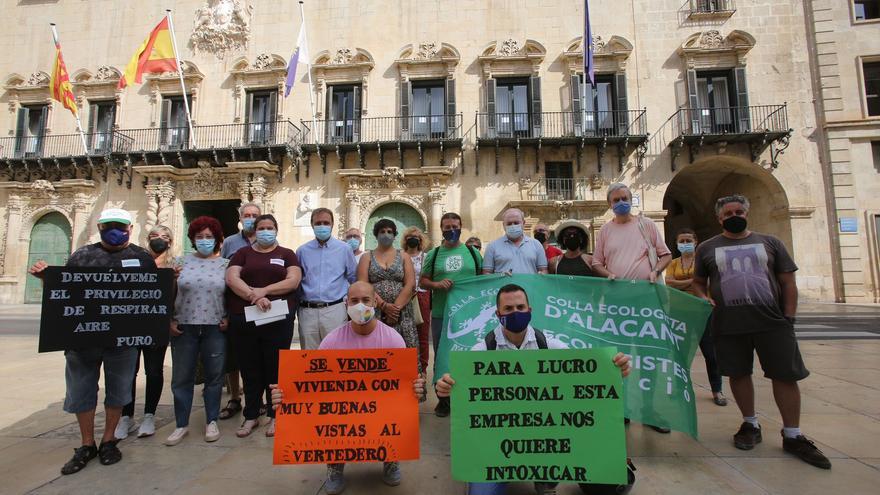 Representatives of various neighborhood associations celebrate in the Town Hall Square from Alicante (until 12 noon) one protest rally for “landfills without licenses” in the Fontcalent valley in an action called by Trekrural and the Platform for Affected “La Serreta” and supported by 21 entities, among them Ecologists in Action, as stated in the poster of the call. Protesters carry banners with the messages “Give me back the privilege of breathing fresh air”, “For sale. Homes with great views of the landfill” or “For personal gain, this company wants to intoxicate us.” Concentration has the authorization from the Government Sub-delegation and the reason for it, as stated in the permit, is “to demand from the Alicante City Council the closure of the illegal facilities of the company Llegando a la Cima S. L, and taking measurements in the plots located in the Fontcalent area, where they are developed annoying activities lacking DIC (Declaration of Community Interest) and / or municipal licenses. “Opposition councilors have joined the protest. The company denies the facts and has issued a statement noting that Llegando a la Cima SL currently owns a construction and demolition waste recycling plant that is idle and closed to the public and in which they are being carried out recovery work on the plots ascribed by order of the General Directorate of Environmental Quality and under the strict supervision of the Urban Planning Department.

A neighbor who attends the protest and who claims to reside in front of the facility points out that “there are all kinds of remains” and complains that “They are constantly grinding, entering trucks, deteriorating the road and storing what they are catching and that we are breathing daily because it is close to the houses. We are very insecure because we do not know who is allowing this, it is without a license, without a DIC, and it comes from another landfill that has been closed to them. We don’t know how it is being allowed today. ”

For its part, the company alleges that the stock “has been sold as a general protest against all facilities but the request was made naming only Arriving at the Top and a photo of our facilities appears on the promotional poster. “They have also issued the following statement signed by the Board of Directors:

“Faced with the campaign of harassment and discredit that the company Llegando a la Cima SL has been enduring on the part of the false accusations made by the AAVV of the departure of Fontcalent and neighboring areas and on the concentration called today in the Plaza del Ayuntamiento by said neighborhood associations, supported and disseminated through social networks by councilors of the political opposition of the Consistory, the company management wants to state:

1. That despite the fact that the reason for the convocation of the concentration is as stated on the poster, the protest against the illegal facilities in the area, In general, in the permit request presented to the Government Sub-delegation, it is clearly stated that it is a concentration to protest the “illegal” installations of the company Llegando a la Cima SL.

2. That Coming to the Top SL currently owns a construction and demolition waste recycling plant that is idle and closed to the public and in which recovery works are being carried out on the plots assigned by order of the General Directorate of Environmental Quality and under the strict supervision of the Urban Planning Department.

3. That the AAVV that today are concentrated have repeatedly requested, through prior demonstrations and concentrations, that the accumulations of construction and demolition waste from said plant be removed, of which more than 80 percent have withdrawn today, a fact that the technicians of the Alicante City Council have certified by inspection and report.

4. That Coming to the Top SL is scrupulously complying with the instructions given by the General Directorate of Environmental Quality dependent on the Generalitat Valenciana and the Department of Urbanism of the Alicante City Council.

5. That Coming to the Top SL recently acquired in competition other plots located in the Fontcalent area that previously belonged to the company Excavaciones Alicante SL

6. What These plots have all the necessary authorizations for the recovery and sale of aggregates, a fact that is recognized and certified by the Department of Urban Planning of the Alicante City Council, thus being a completely legal activity and supported by the relevant permits.

7. That, therefore, Llegando a la Cima SL is not carrying out any illegal activity in either of its two facilities.

8. That in view of the fact that AAVV, residents of the area and politicians publicly impute false facts to the company that incur undermining of its image, the legal department of Llegando a la Cima SL reserves the right to take legal action cAgainst anyone who cannot provide documentation that demonstrates the alleged illegal activity against which they are concentrating today in the Plaza del Ayuntamiento, and against those who echo the aforementioned protest, citing the company Llegando a la Cima SL on any of the channels existing communication “.