The Minister of the Interior of Guatemala, Gendri Reyes, has reported 37 detainees during the riots that occurred this Saturday in Guatemala in the framework of the demonstrations lasting more than seven hours to protest against the 2021 budgets, against corruption and against the president, Alejandro Giammattei. During the protests a group of protesters broke into the Legislative Palace and set fire apart from the property.

For its part, the National Civil Police (PNC) has reported 31 detainees “responsible for committing vandalism” who participated in the violent incidents on Saturday afternoon and night in the Historic Center of Guatemala City and has published a list with names. Among them are two minors.

“Since morning hours, the National Civil Police was in readiness to provide support and be at the service of the people who would exercise their right to peacefully demonstrate in the Plaza de la Constitución. However, another group of people, men and women, they began to destroy public and private buildings in another sector of the historic center, “explained the Police.

“When they arrived in front of the Congress of the Republic, hooded men broke windows and set fire to the premises of that building. The National Civil Police, guarantor of Human Rights, was in the place and was attacked with stones, sticks, fireworks of great explosive power. Several elements of the PNC were injured in different parts of the body, for which they were transferred to assistance centers, “he added.

The police did not intervene in the assault, but later used tear gas and water cannons. At dawn Emisoras Unidas has published a video in which agents can be seen using violence against protesters. Other videos show a photojournalist being attacked by the police. 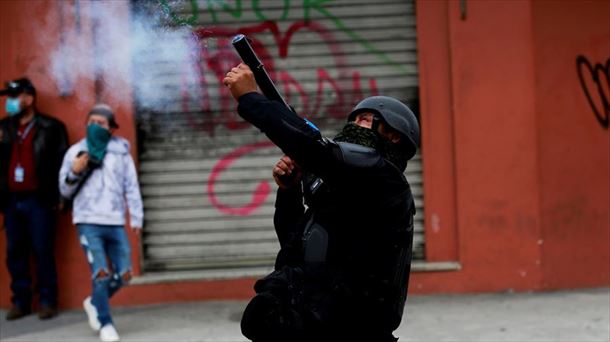 A policeman shoots during protests in Guatemala. Photo: EFE

In that sense, the Guatemalan vice president, Guillermo Castillo, has requested this Sunday a “serious investigation” for the “excessive use of police force” against hundreds of people who demonstrated on Saturday in disagreement with the Government and Congress.

Castillo has indicated through his social networks that he “urgently” urged the Public Ministry (MP, Prosecutor’s Office) to carry out the corresponding investigation.

The vice president has also expressed his suspicions about the way a part of Congress was set on fire by allegedly angry protesters. “The burning of Congress and what happened around it is generating doubts,” said the 54-year-old lawyer and businessman.

The protests came after Castillo proposed to the country’s president on Friday that both resign their positions “for the good of the country” because “things are not good” in government.

In addition to the resignation of both, Castillo has asked Giammattei to veto the 2021 budgets because they have “anomalies”, so it should be returned to Congress and be modified, he explained, appealing to “efficiency, transparency and austerity so as not to have more debt “for this modification.

The Congress with a majority similar to Giammattei approved last week a budget for 99.7 billion quetzals (about 10.8 billion euros), an increase of about 25% over the previous year.

Most of the funds are directed to the construction of infrastructures in concessions to the private sector and it does not plan to increase the health or education funds, nor those destined to combat poverty and child malnutrition.

59.3% of the almost 17 million inhabitants of Guatemala live in poverty and child malnutrition affects almost 50% of children under five years of age.