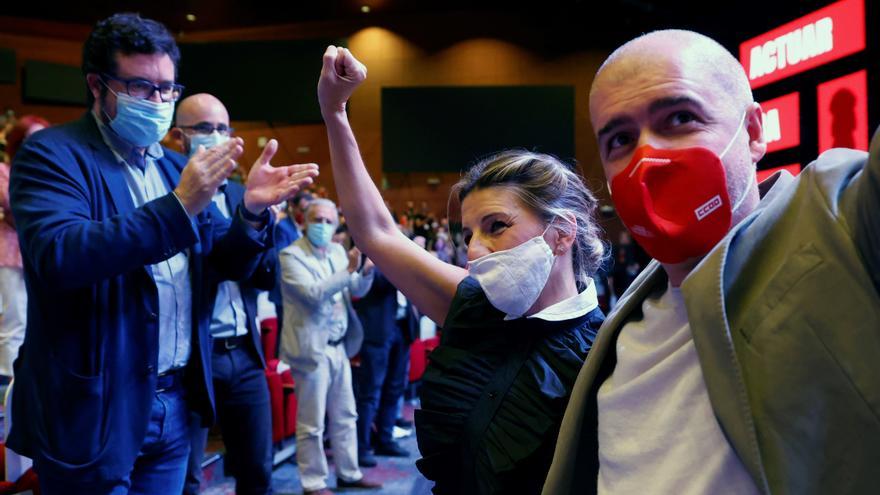 The two partners, PSOE and United we canThey swear and perjure that they do not want to break up, that the coalition is solid and that they will withstand the storm. But this time it’s not like the others. The crisis that has erupted in the coalition government is more a Foreword of what is to come. Because the labor reform is one of the vault keys of the legislature, which “gives sense”, Say the purple ones, to their presence in the Executive. A “structural” measure that monitors the European Union and that it belongs to “all” the Cabinet, the Socialists insist. Now, both are trying to redirect the conflict, lower the temperature, and this helps, they acknowledge, the deactivation of the UP war against the president of Congress. The positions of the partners, however, his firms. They are measured, they are groped in a matter of very high voltage such as the dismantling of the PP legislation, waiting for the moment to come “decisive”, When the reform has to be approved by the Council of Ministers, before it is sent to Parliament.

That the pulse is still alive was shown this Saturday Yolanda Diaz at the closing of the 12th Confederal Congress of Workers’ Commissions, in which Unai Sordo was re-elected as union leader. Acclaimed by the delegates shouting “¡president, president!”, He promised to “Repeal the labor reform, despite all the resistance, there is and there are many ”. A challenge to Nadia Calviño, with whom she is openly confronted. With the difference that in this fight Pedro Sánchez has unambiguously supported his first vice president in the attempt to take the reins of the negotiation. “It is not an interference”, sentenced the head of the Executive on Friday from Brussels, but “collaboration, coordination”Of all the ministries in a crucial law for the future of the Cabinet. The president wants Calviño to be in the front line as a letter “from confidence”Before the social agents and before the EU, they justify theirs.

The leader of United Podemos in turn received a message back in duplicate from the heavyweights of the PSOE. On the one hand, its number two, Adriana Lastra, during the Extremadura federation congress: there will be “repeal”Of the labor reform, but“the PSOE is going to do it”. The party “complies and will fulfill”, completed the third, Santos Cerdán, from the meeting of the training in Navarra, “with its commitment to update its relationship with labor models.” “So what no one is left with any doubt”, He stressed, referring to Sordo, who distrusted the will of the Socialists to liquidate the PP regulation and aligned himself with the second vice president, remarking that” it cannot be said “that the conversations on the new architecture of the labor market are in a “preliminary” phase, as Calviño had said on Thursday before CCOO.

The dialogue has not been broken, and in the last hours Lastra and Bolaños have been speaking with Belarra and Díaz

There was no further verbal escalation. Sánchez, who made his fifth trip to La Palma since the volcano erupted, avoided questions about the crisis in the coalition. Prudence and the will to temper the conflict prevailed, at least for now. Communication, in fact, was not interrupted. Adriana Lastra and the head of the Presidency, Félix Bolaños, squires of the president in the party and in the Government, spoke with Díaz and Ione Grass, leader of Podemos and Minister of Social Rights and the 2030 Agenda.

#Direct | Díaz: “This is the message I want to send to the working people of this country: we are going to repeal the labor reform despite all the resistance, which there is and there are many” pic.twitter.com/feJyMoziFo

“It was fatal and we are to blame”

First, to accept the convocation of the table for monitoring the agreements, which will meet on Monday or Tuesday, and also to convey to its partners that it was “unacceptable“United We can present itself a lawsuit against Meritxell Batet for the withdrawal of the seat of the deputy Alberto Rodríguez. “They crossed the line. The judgment of the Supreme [que le condenó a mes y medio de prisión, sustituido por 540 euros de multa por agredir a un policía] it can be a fuss. But Meritxell could not do anything other than comply, and to focus on it is a mistake ”, they argue in the socialist wing of the Cabinet.

In Díaz’s environment they recognize the “mess”And the mistake. This Saturday, the Minister of Consumption, Alberto Garzón, federal coordinator of IU, spilled water when he warned that the judicial action was “in a personal capacity” of Rodríguez, not an initiative of the confederal space. “It’s true, it was fatal and only we are the ones to blame. But that is no longer going to be an element of conflict ”, indicated sources close to the second vice president. Rodríguez also leaves the scene: in the afternoon, he announced his departure from UP. “And that makes it easier for the monothem to be solely the labor reform,” added the same sources. Cool it.

The socialist part of the Government was pleased that its partners “collect yarn”. “But this is a storm in a glass of water. We remove iron, but this matter will have iron later ”, they observe from the president’s environment, an appreciation with which the purple ones coincide. Because the problem is not only who coordinates the work at the table with employers and unions, but the same content. The labor reform itself. “And there are many parts to square: the positions of PSOE, United We Can, employers, unions and the European Commission, and it will be very difficult,” warns a socialist high command.

❌ The blackmail of the right to the workers and the middle class has ended.

✊ We will repeal the labor reform:

Because fair growth is possible.
Because a recovery is possible for everyone.

🌹 That is and has always been the socialist project.

The purple ones congratulated themselves that Sánchez, at the closing of the 40th Congress of the PSOE, promised to “put an end”To the labor legislation of the PP (also the gag law and prostitution), and then give Diaz a boost. That is why they were not expecting the email from Calviño on Thursday night, in which she assumed the direction of the negotiations. Immediately, Work sent two e-mails to the Economy – which were not answered, they say – and they called Sánchez’s Cabinet in Moncloa. The lack of “reaction” motivated Belarra’s tweet on Friday morning, requesting the meeting “urgent”From the agreement monitoring table. In the middle of the afternoon, the president’s reply, endorsing his first vice president. There has not yet been a call between the leaders because, remember from Moncloa, it has not been necessary to unblock “any issue” between the two, directly, not even the Budgets.

Alberto Rodríguez announces that he is leaving Podemos https://t.co/WXFAWYmsvE pic.twitter.com/bIExFMpz6v

Work holds the pulse. He considers that he must continue to guide the conversations with the social agents, as he has been doing since March 17, and defends that since then he has kept up to date with the progress of both the Economy and the Moncloa. In Díaz’s team they insisted this Saturday that just as it is the Treasury who leads the negotiations of the Budgets, or it is Inclusion who takes the baton in pensions, it must be the second vice president who is in charge of a matter that is his “competence“.

“There are many parts to square: the positions of the PSOE, UP, employers, unions and the European Commission, and it will be very difficult,” warns a high socialist command

In the PSOE, however, they accuse the morados of wanting to patrimonialize the successes of the coalition – there are already 12 agreements promoted by Díaz – when in the end they are measures “of the Government of Sánchez, not of the minister” , and the Cabinet “is a collegiate body, there are no watertight compartments.” “The president has been in all photos with social agents. It is not a question of photos, but of respecting what has been working for months, “they argue in Labor, where they recall that the European Commission welcomes the plans of the UP leader.

“We had information from the negotiation on the labor reform,” they explain from Moncloa, “but now that we have reached the decisive phase, we have to be there. These are very complex conversations, in which the Commission is also involved, and we have to agree on it. They sure want to go further, but this is about unions and employers agree and Brussels accepts”. The PSOE wants employers and workers to be in the pact. It would be the “ideal” way out, although another acceptable one is for a large part of the reform to be agreed and 10% left out that the Government “decides hand in hand with the EU.” “You have to build trust in the negotiation and Nadia has to be in the front row,” they reason. Moreover, they add, they had already commented on it to their Cabinet colleagues.

“We are where we were, at the same point, and the PSOE has to decide whether or not there will be a labor reform,” they summarize in the surroundings of Díaz

Ferraz and the socialist leader’s environment insist that the reform will be carried out, because it is a commitment acquired by the PSOE from long ago, which was already included in its electoral programs for 2015 and 2016. But Sánchez, careful with language, now measures his words: on Friday in Brussels indicated that the government agreement includes the “update of labor standards.” The text signed in 2019 speaks, and the purple ones lean on that, of “derogate“the legislation of the PP of 2012.

In Unidos Podemos they admit that the two parts of the Executive watch arms, although the dispute that broke out on Friday has decreased in degrees. Without any of them reversing their positions. “We are where we were, at the same point, and the PSOE has to decide whether or not there will be a labor reform “, they say from Díaz’s team, in which they defend that she”will not lose the thread”: Seek the agreement with the social agents“ until the last minute ”. “The conflict is going to cool down and redirect. And the reform… we do not see it black, but not white either ”, they conclude. This is: the final battle starts now.